Along the U.S.-Canada border between Ontario and New York, some 1,800 islands dot the St. Lawrence River. Known as the Thousand Islands, this geographical wonder is less known outside of the region. However, one of its products is far better known: Thousand Island dressing, a mayonnaise-based dressing that emerged from the region sometime during the late 19th or early 20th century. While the exact origins of the dressing are a matter of debate, Thousand Island is a common sight in most grocery stores across the United States and is currently the fifth most popular dressing in the country. A variation of the dressing is also a central component of one of America’s most famed burgers, the McDonald’s Big Mac.

Aldi sells a few different bottled salad dressings, and this is one of them. 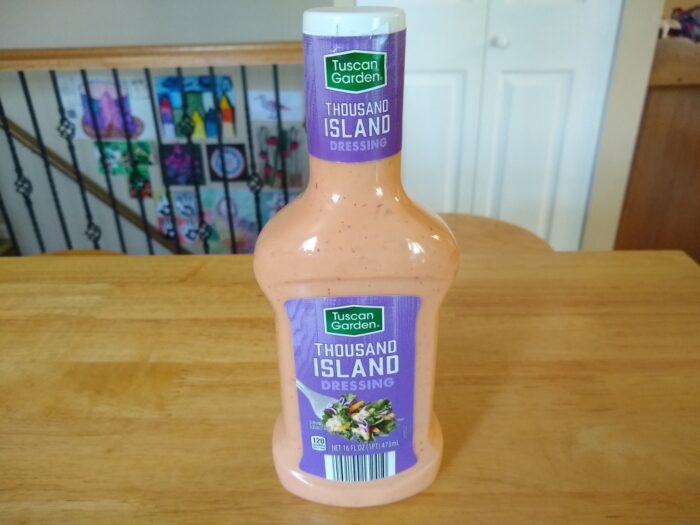 Tuscan Garden Thousand Island Dressing is an Aldi Regular Buy, meaning it’s always in stores. It currently runs 89 cents for a 16-ounce bottle, or about 5.6 cents an ounce.

Like most bottled salad dressings, it comes sealed, and while it’s sealed it can be stored at room temperature. To break the seal, you first have to break the paper wrap at the top of the dressing, unscrew the lid, remove the foil seal, and then replace the lid back on the bottle. Once you break the seal, you need to refrigerate the dressing. Also note the use-by date on the dressing, which is stamped along the neck. The bottle recommends shaking well before each use.

The dressing has a fair amount of fat and sodium, and since many people might use more than the 2-tablespoon serving size, this is a dressing to use in moderation. The ingredients include soybean oil and eggs, although it is gluten free and — like all private label Aldi food products — contains no artificial colors. I noticed that mayonnaise, a common ingredient in most Thousand Island recipes, is not common in bottled Thousand Island. 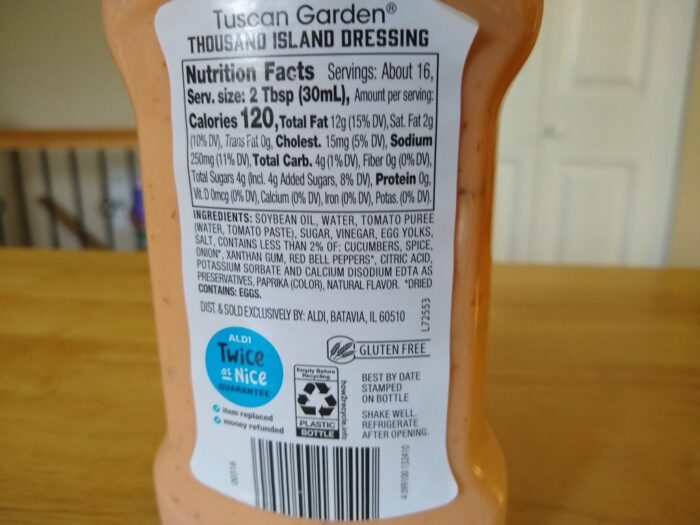 I’m the only person in my family who is much of a fan of Thousand Island dressing (you either like it or you don’t), and I think this is a pretty good dressing. It is sweet and a little tangy, and it garnishes salad well. I also think you could make a decent Big Mac impersonation by adding this to a burger. I’m sure you could do better making this dressing yourself or buying it at a restaurant, but this is overall a solid version.