The ladies of my household use standard disposable razors. They prefer the closer shave of a disposable razor over an electric one, and my wife in particular mostly doesn’t have too much trouble with a disposable. I say mostly, though, because it’s not a trouble-free experience: disposables can cut, especially around the ankles. For her, though, it’s worth the trade-off.

As a guy, I’ve used disposable razors myself, on my face. I never liked them though — I got tired of all the cuts — and eventually I settled into using an electric razor. Early in my adult life I used a foil razor, but in time I moved on to a rotary shaver, which I like better on my face.

Recently, Aldi advertised a foil shaver for women in its ad. As someone familiar with electric razors, I asked my wife and daughter to put the woman’s razor through the paces. 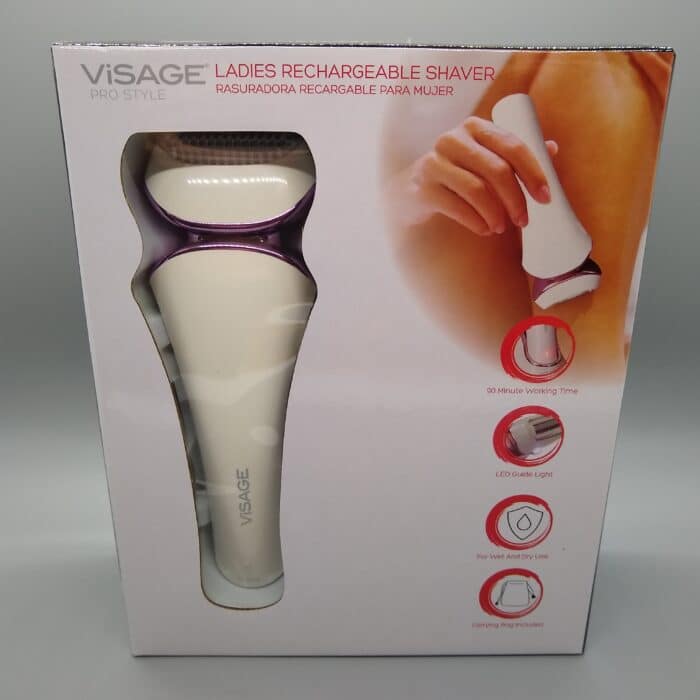 The Visage Ladies Rechargeable Shaver (Product Code: 703122) is an Aldi Find, which means it’s only in stores for a short time. At the time of this post, the shaver costs $14.99, which is less than most electric shavers you’ll find, especially ones with the features this one has. Those features include:

The shaver comes out of the box with the following: 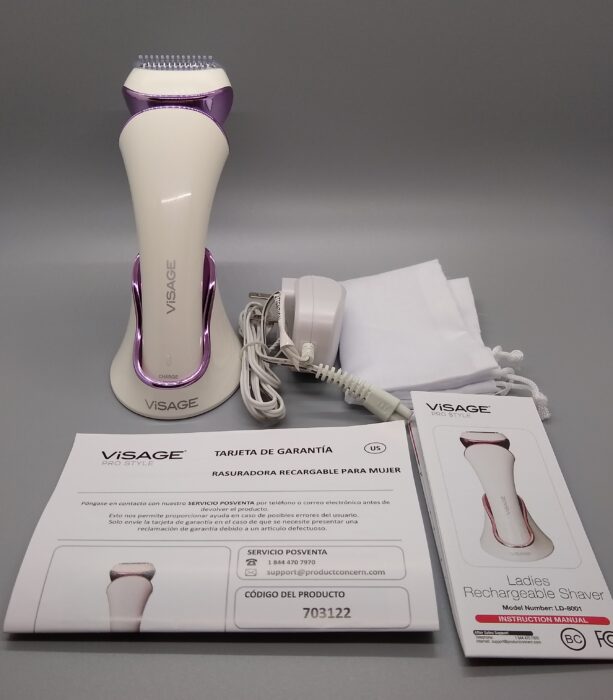 The instructions come with a number of warnings and suggestions, so I encourage users to read them carefully before first use. In particular, it’s important to note that this shaver should not be used while plugged into a wall socket, especially if water is involved. Also, while the shaver is designed for wet use, the instructions warn against dropping it in water, even unplugged.

The shaver can be charged either by putting it on the base or by plugging the cord directly into the shaver. It’s a nice versatility, especially if you intend to travel with the shaver and don’t want the base adding space. In either case, the charging light glows red while charging and turns white once it reaches a full charge.

Beyond that, this is an easy razor to use. You push the switch on to activate it, then shave. The side trimmers are great for shortening longer hairs, while the foil is good for bringing short hairs down to the skin. Foil razors are generally nick-free, and this one is no different: my wife and daughter both used it without any problems. The LED guide light helps a little with seeing what you’re shaving. 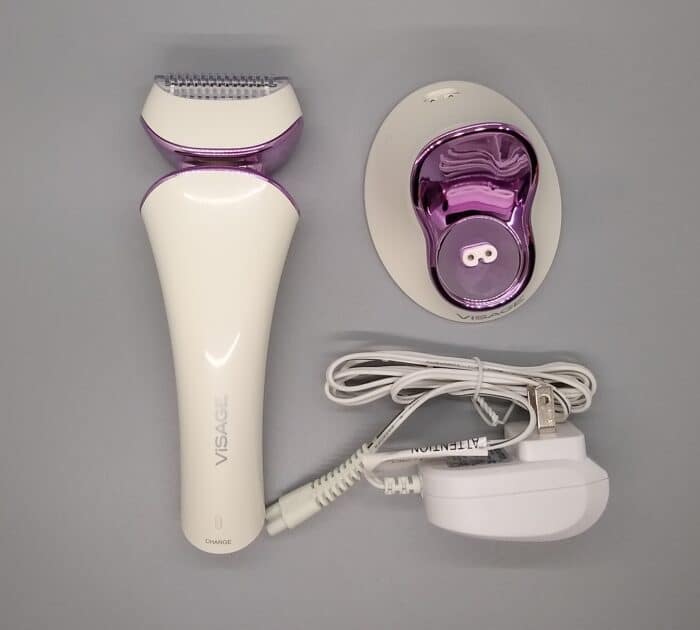 You should clean the unit after use, and doing so with the Visage is a snap. You simply pull the foil and trimmer piece off the unit, then rinse both the top of the main unit and the foil unit under warm or hot water. You have a cleaning brush, but the good news is you probably won’t need it. I think being able to rinse the shaver is a must-have feature: I have owned both dry and wet shavers and in terms of upkeep it’s no contest.

My testers reported that it wasn’t as close of a shave as a disposable, but it still did a good job. They said that they could still feel the hair — it didn’t make their legs silky smooth like a disposable — but in terms of looks the hairs weren’t visible. Both said they probably would prefer using disposables during the summer especially, but in the winter they felt like this was a good option.

One more note: foil blades do wear out, usually after a year or so. In my experience replacement blades are annoyingly expensive, sometimes as much as the blade itself. The Aldi shaver isn’t designed to work with name brand foil replacements, but buried in the instructions is a phone number you can call to order replacements. I didn’t call the number, but I would expect the cost to be less than the $20-30 I’ve paid for name-brand blades.

Aldi is a surprisingly good place to get men’s electric razors, and that is also true for women. The Visage Ladies Rechargeable Shaver is not only a bargain, but it is a solid shaver that does a respectably close shave (for an electric, at least) whenever you need it. It’s also a wet-dry razor, so it’s easy to use and just as easy to clean. We’ll see how long it lasts, but the early returns look good.