Lacura Razors for Men and Women

I’ve never understood why disposable razors can be so expensive. They’re basically a cruel little piece of metal encased in plastic, and yet the “high-end” ones are ridiculously priced. If I’m going to cut myself shaving — and I know I will sooner or later — I’d rather not spend a lot of money for the privilege.

I’ve had bad experiences (read: dozens of little cuts) with cheap razors before, so it took some time before I was willing to try the Aldi brand. But now they’re my go-to razor, and I don’t even need a coupon to bring the price down to less than $10 for a pack of 4. 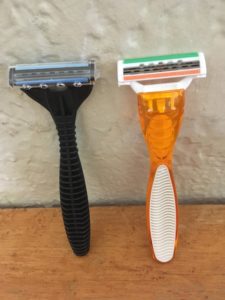 The heads sound identical but they’re not. Both have three blades, both pivot, and that semi-useless “moisture strip” above the blades which in no way means you can skip the soap/ shaving cream step in your shaving routine. But the women’s version is noticeably wider than the men’s (see picture below). That makes for a slightly smoother shave, and perhaps a little safer, too. 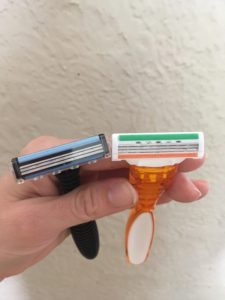 But it’s the number of blades and the pivot that matter the most with razors. If you’ve ever cut yourself badly on a single or double-bladed non-pivoting razor (and trust me, I have), then you know how important it is to have at least three blades to properly mow down that leg carpet and a head that can traverse the curve of your knee without removing large chunks of skin along the way.

I’ve heard that men have the same issue with chins. So whatever you’re shaving, you’ll be happy for that pivoting head.

The handle on the men’s razor is a little narrower than the women’s because, for reasons I’ve never understood, women’s razors often have wide handles. I find it unnecessary, but if you like a “soft, easy-grip” handle, then you’re in luck.

The women’s handle is also scented (again… why?) but I honestly can’t smell it unless I hold it right up to my face. I don’t recommend this — it has a very artificial “flowery” scent that reminds me of the kind of air freshener my grandmother used in the 1980s. But I don’t notice it when I shave because it’s too far away from my face to smell anything.

I’ve used both styles, and I find them almost identical in terms of actual use. The slight differences in head and handle width don’t really make much difference to how well or how safely they work.

Both types are a good value for your money, and I definitely recommend them.

Frankly, the biggest reason to buy both types is if you share a shower with another person who shaves, and you want to make it abundantly clear whose razor belongs to whom. Because no one likes standing in the shower, feeling the water turn from hot to cold, as you stand there cleaning out someone else’s wiry little hairs when you really just want to shower and shave and move on with your life.

Which you can do with these razors… for a lot less than you would spend anywhere else.