Skip to content
Home Features What Happens at an Aldi Grand Opening?

What Happens at an Aldi Grand Opening?

I’ve seen some remodeled Aldi stores in my area hold grand openings, and they are worth attending if you’re an Aldi fan. These events are unique in two aspects: 1.) you have the chance to win gift cards and free products, and 2.) you may be able to sample some of Aldi’s products … and if you are familiar at all with Aldi, you know they never offer samples any other time, so it’s a big deal to be able to try foods at a store’s grand opening. 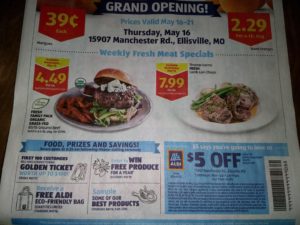 A peek at what happens during an Aldi grand opening. (Click to enlarge.)

A store in my region had a grand opening celebration that spanned several days (a Thursday through Saturday) recently, and I received an ad in the mail that promoted several things:

The ad also stated: “Doors open at 8:25 a.m. following ribbon-cutting ceremony.” In most locations, Aldi opens for the day at 9 a.m. It wasn’t clear if the earlier opening time was just on Thursday of that week (the grand opening), or if it was all weekend as part of a larger celebration.

A footnote also indicated that the golden ticket and free-produce-for-a-year prizes would be awarded in the form of gift cards and that there is only one winner per category per store, and that no purchase was necessary. The ad was confusing regarding the valid dates for these promotions, though, with the footnote indicating it was only valid on Friday, although the ad stated the free produce promotion happened on Saturday.

For those who could not get to the remodeled store on opening weekend, my ad had a coupon for $5 off a purchase of at least $30 that expired in about 2 weeks.

Unfortunately, I didn’t go to this particular store’s grand opening because it didn’t fit my schedule and, more important, it was far enough away from my home that it was not worth the gasoline it would take to get there. Maybe someday I’ll get to see a grand opening at a more conveniently located store.

If you’ve been to an Aldi grand opening, leave a comment and share your thoughts. Have you won a golden ticket or other prizes during a grand opening? Did you sample any food?