Over the years, Aldi has sold a range of Indian-inspired foods. Some of them are sold all the time, and some are only in stores for limited periods. The most well-known Indian product at Aldi is its jarred tikka masala sauce, which has gone through multiple changes, but another popular Indian sauce at Aldi is the jarred korma sauce. Aldi used to sell it under the Journey to India house brand, but during the late summer or early fall of 2019, it was switched to the Cook House label.

Cook House Korma Sauce cost $1.99 for a 15-oz. jar at the time of publication. It’s described as “a creamy yellow simmer sauce with spices and coconut.” The jar also says it’s an “authentic recipe” and that its spiciness level is mild. 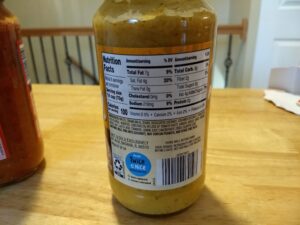 It would be nice if they were specific about what “spices” are included in this sauce.

Those with allergies should know it may contain peanuts and other tree nuts.

The jar states the sauce is best for sauteing (add to a wok or skillet), roasting (pour on top before placing in the oven), or slow cooking.

The cooking directions state to heat oil in a saute pan. Season chicken with salt and pepper and brown evenly in hot oil. Add onions and other vegetables along with the entire jar of simmer sauce. Cover the pan and simmer over low heat for 10 to 12 minutes or until chicken is cooked through. Enjoy with rice.

As far as taste, my family thought this sauce was okay. It has plenty of coconut flavor, and it’s not spicy at all. We often eat Indian sauces like this with chicken, but this time we tried it with meatballs made from ground lamb that was sold as a limited-time ALDI Find (Special Buy). It made a good dinner served with basmati rice, naan, and some Trader Joe’s samosas.

Aldi’s Cook House Korma Sauce replaces the Journey to India Korma Sauce. We have less familiarity with korma sauce than we do with tikka masala sauce, but the korma tastes decent to us. If you want an Indian-inspired meal, this isn’t a bad option served with chicken or lamb.