EDITOR’S NOTE: Spoilers ahead on the contents of this Advent calendar.

For the last few years, fidget toys have gained popularity rapidly. Fidget spinners and fidget cubes were among the first types of fidget toys that were especially popular in the mid 2010s. Then we had Pop Its, noodles, and many more fidget toys hit the market in later years. They’re designed to relieve stress and improve focus for some people.

More creative fidgets continue to show up on the market, and Fashion Fidgets are among them. A relatively new toy, these dolls have different fidget pieces on their clothing and hair. With the holidays coming up, Aldi took it upon themselves to sell a Fashion Fidgets Advent Calendar. 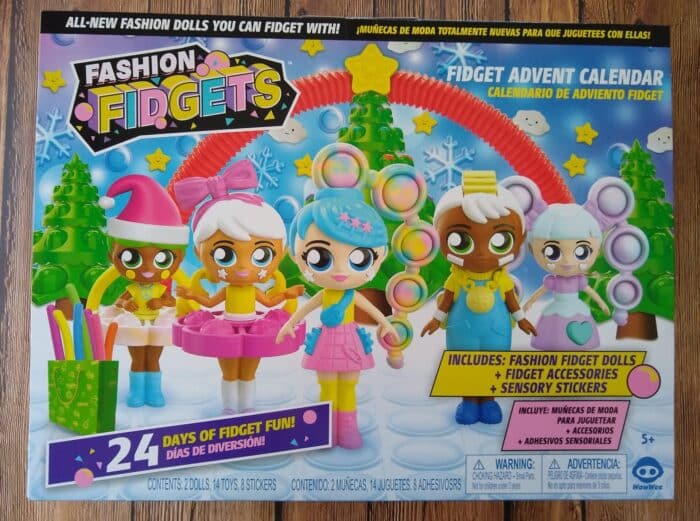 The WowWee Fashion Fidgets Advent Calendar is $24.99, and it is an Aldi Find, which means it’s only in stores for a limited time. Once it’s gone, it’s gone, and you won’t be able to order it online from Aldi. There’s been an especially wide variety of Advent calenders at Aldi this year, including beer, candles, even hot sauce. And toys are no exception.

This Advent calendar in particular isn’t sold anywhere but Aldi. I looked for it online, and there are no other images or listings besides the ones Aldi has. The idea with this calendar is that you get two dolls, 14 fidget toys, and 8 stickers. I’d never owned a Fashion Fidget before, so I was ready to open it so I could share with readers who are curious about this calendar’s contents. 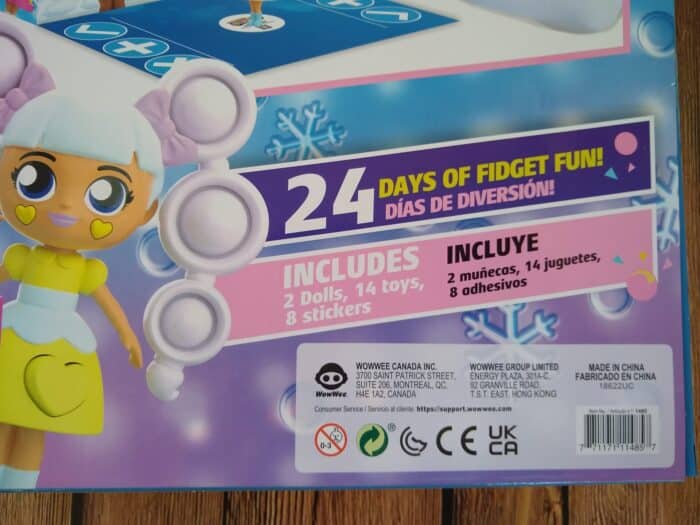 The back of the calendar box. (Click to enlarge.)

The first thing I want to address is the floor that’s revealed when you pull down the main box flap to reveal the doors for each day of Advent. There’s a check mark, a plus sign, and an x on each side. Fidget trading is a thing, and these are the symbols used to trade. The check mark means the trade is confirmed, the plus sign means one person wants something else added to make the trade fair, and the x means someone doesn’t agree to the trade. 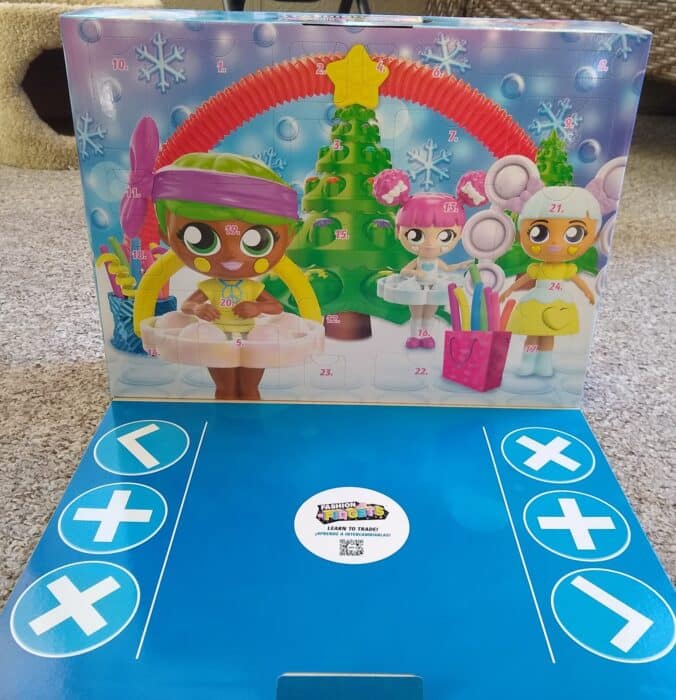 A fidget trading floor inside the box.

The first thing I noticed was that you get a doll on day one. I appreciated this, since I don’t think a child would be exited to get a sticker on day one. I got my second doll on day 13, and I’m 90% sure that the dolls are random, so you don’t know which two dolls you’ll get. 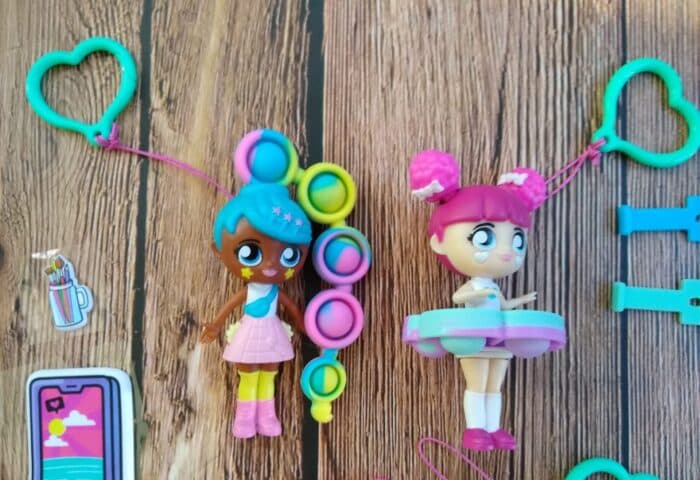 Closeup of the two dolls included in my calendar.

The first doll I got had buns in her hair that were joysticks, along with clickers on her cheeks and a pop skirt that spins. The second doll had a pop ponytail, clicker cheeks, and gears on the sides of her skirt. Unfortunately, one of her cheek clickers was defective and didn’t make much sound. I found the gears hard to use as well. They hurt your hands to spin them, and her arms get in the way, since they don’t move. So I used the first doll a lot more than the second. 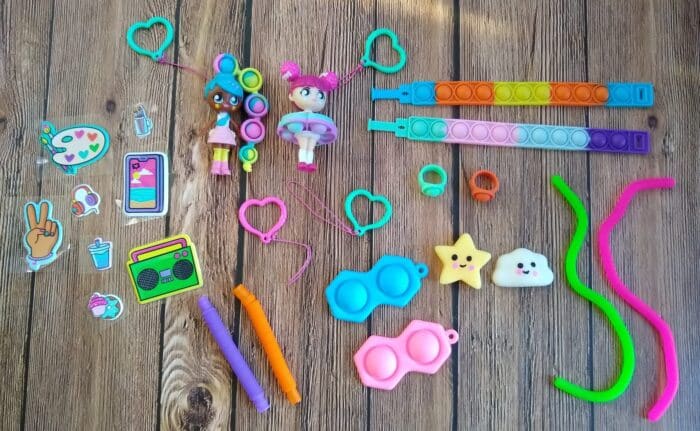 Everything that comes in the calendar.

All the dolls have removable key chains so they can attach to backpacks. There are a few boys in the line as well, though they all have the same design, just different colors. This is the case for some of the girls in the line, too. If you end up getting one of the dolls with noodles in their hair that you can pull, be careful. Many people online say that they break incredibly easily.

These dolls aren’t exclusive to the Advent calendar, either. They’re just the normal types of dolls you get in the Fashion Fidget product line’s blind boxes. So if you already own some of them, don’t be surprised if you get a double. There’s also no collectors guide included. 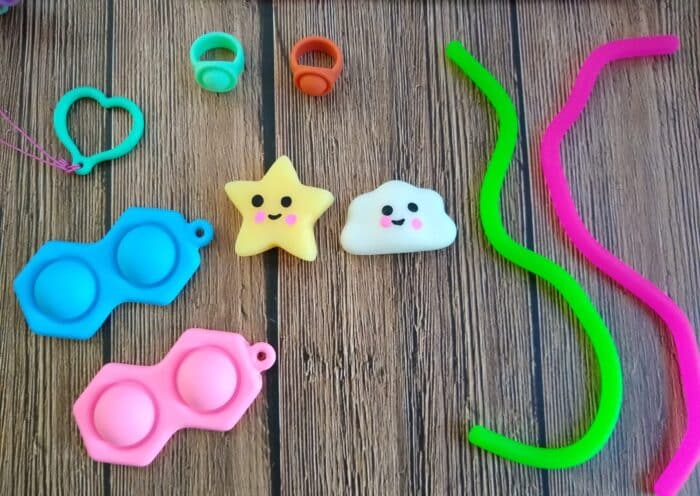 Aside from the dolls, the calendar contains stickers and other fidget toys. The stickers don’t really feel like fidget toys, but they’re puffy stickers, so they have texture. The stickers have images of different foods, electronics, and art supplies. The actual fidget toys include the following, and there are two of each: 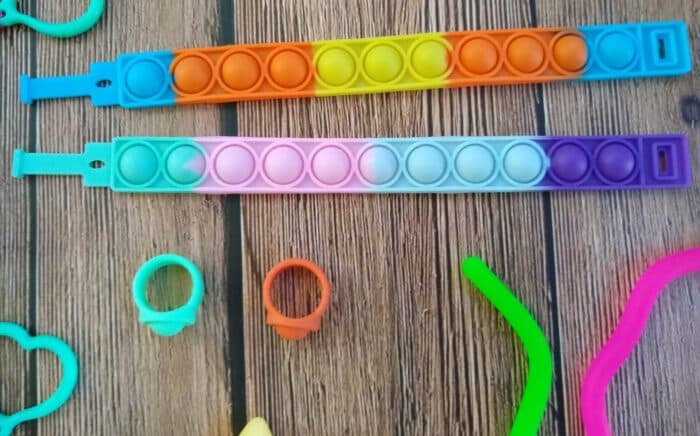 A closeup of bracelets and rings included in the calendar.

I liked the variety of toys included, and some of them were pretty fun. I found myself drawn to the pop tubes. The rings and bracelets can fit larger hands, so you don’t necessarily need to be young to enjoy these. The dimples, which are two large connected pop bubbles, are a bit hard to push, so they weren’t as satisfying as some of the other toys for me. Be careful with the noodles and mochi. The faces on the mochi can wear off, and the noodles are at risk for breaking if they are stretched too much. They’ve held up well for me so far, though. 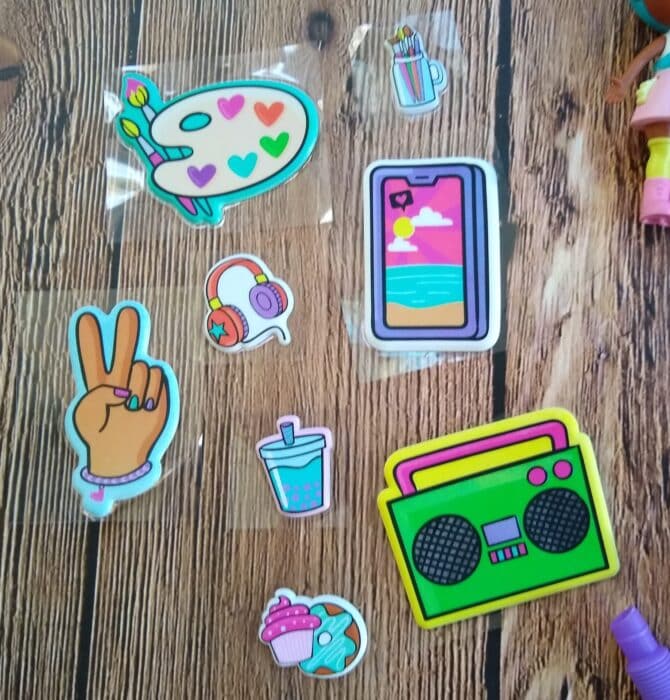 A closeup of the stickers in the calendar.

The WowWee Fashion Fidgets Advent Calendar was more fun than I expected. There are some disappointments here and there, and it includes a lot of inexpensive stickers to help fill up the days. Overall, though, if you’re someone who enjoys fidget toys, this calendar does the trick. I’m satisfied with this calendar, and it’s a creative way to count down to Christmas.