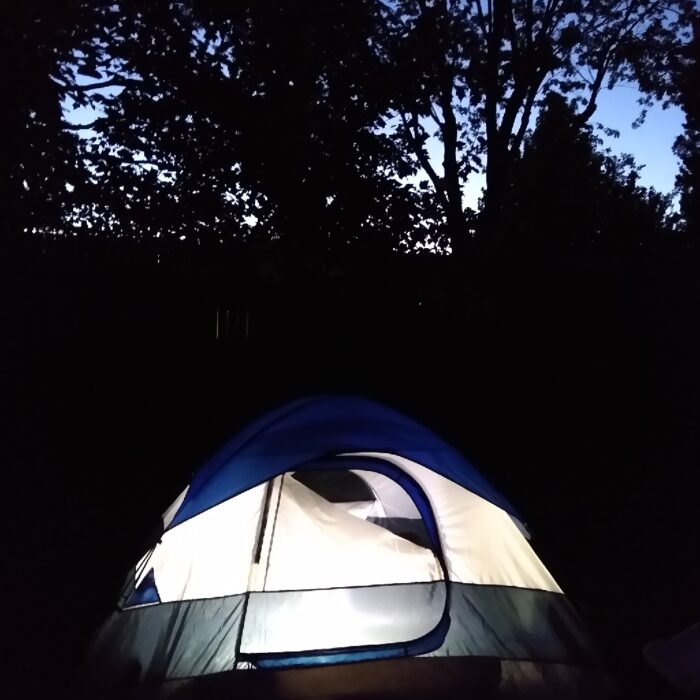 EDITOR’S NOTE: updated September 2017 with information about a warranty claim and June 2020 with a three year progress report. You can find both at the end of this post.

Aldi doesn’t go light on camping. Whether its tents, bedding, backpacks, or accessories, the grocer pretty much pulls out all the stops throughout wave after wave of Special Buys, beginning in May. Some of the more notable products during that time are tents, including an Adventuridge 14′ x 10′ Modified Dome Tent.

This tent is a smaller cousin.

The Adventuridge 4-Person 9′ x 7′ Dome Tent, which retails for $29.99 is — like the Adventuridge 14′ x 10′ tent —  manufactured by Wenzel. Wenzel makes a wide variety of tents, and they tend to get decent to good reviews online. This Adventuridge tent is similar to, but not identical to, some of Wenzel’s other tents. We bought the Adventuridge 9′ x 7′ to replace our ancient Northwest Territory (Kmart) 7′ x 7′ tent, which was finally starting to show some daylight in the tarp lining near the bottom. 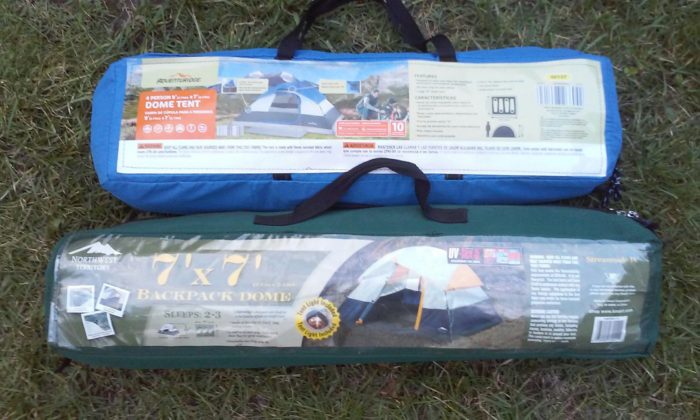 Now, a 7′ x 7′ tent is usually classified as a “3 person tent” while a 9′ x 7′ tends to be labeled a “4 person tent,” so the Aldi tent is technically of a different class of tents compared to the one it replaced in our camping stock. That said, we tend to look at person counts on tent bags with a lot of skepticism, since they assume that people are basically being crammed into the tent like sardines. (In an emergency, you could do that, but we don’t recommend it.) Instead, we see both a 7′ x 7′ tent and a 9′ x 7′ tent as basically for 1-2 people, with the 9′ x 7′ being a little more 2-person friendly.

The Adventuridge 9′ x 7′ tent comes out of the box with:

The tent is backed by a 10-year warranty, which is one of the longest warranties we’ve seen either for a tent or an Aldi product. [EDITOR’S NOTE: as of 2020, the warranty is now 2 years.]

Assembling the Adventuridge 4-Person 9′ x 7′ Dome Tent isn’t hard, but it’s easier if you’ve got two people. Basically, if you’ve assembled one of these before, you know the basic plan: you thread the two main poles through the tent’s guide fabric, raise the tent, and pin the poles. (The manual additionally suggests pinning the poles in the back first before pinning the front.) From there, you clip the poles into place, tie the poles together, stake the tent to the ground, add the rain fly, and you’re done. Two people working together can probably do all of this in 15-20 minutes, and probably faster if you’ve both done it often.

Assembling the tent alone, though, is more complicated. After experimenting (and, admittedly, looking around for advice online), the best solo technique I know is to:

Using this technique, I was able to successfully assemble and lift the tent by myself in the wild. 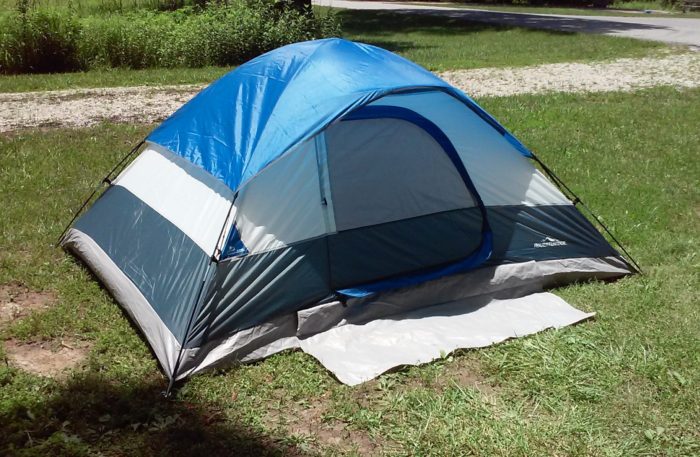 The tent at a local state park.

So let’s talk about a few of the tent’s features.

The door. The door consists of a D-style entry in front of a welcome mat. (Be careful when you first step on the mat, as part of it is designed to sit flush against the side of the tent.) The door isn’t too hard to open, but it can get stuck on the zipper cover. To avoid this, we recommend, when possible, gently pulling up on the zipper cover as you pull the zipper.

The fly. It’s relatively simple to put the fly on — it attaches to the poles with Velcro, the tent body with clips, and the main tent body with a pole inserted into grommets — but it also has a guy line in the back that can be staked into the ground, which the manual says helps with ventilation. 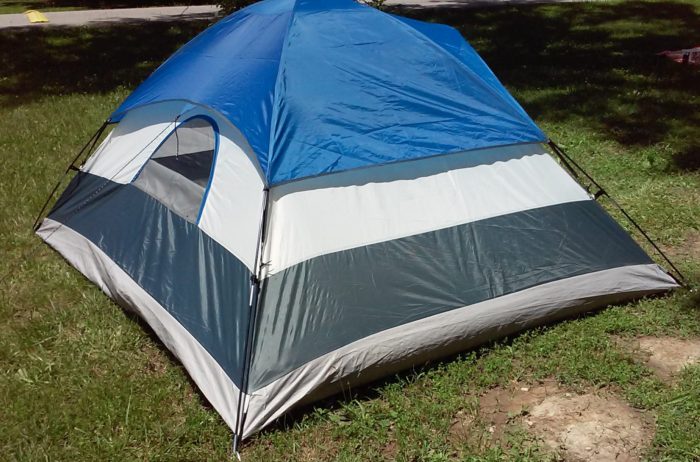 The inside. The floor of the tent is a tub-style tarp that rises a bit off the ground. There is a small storage pouch on one of the corners near the door, and there is a mesh gear loft that can be hooked to the top of the inside of the tent. If you don’t use the gear loft, there is also a small hook that could be used to hold a portable lantern or perhaps a small fan; just be aware that the hook doesn’t seem designed for a lot of weight. Finally, there is an e-port in the front that you can use to string an extension cord through if your site has electrical hookups.

We tried out the tent with two people, both of them using single-person airbeds. We lined up the airbeds parallel to each other along the 7 foot part of the tent, and right away we noticed that the airbeds pushed snugly against the tent walls, and if I was fully stretched out, my head or feet would touch the tent wall. Neither of those things was true of our old 7′ x 7′ Kmart tent. This is a potential problem: although our trip was a dry one, we’ve discovered from experience that objects pushing against a tent wall during rain can cause water to seep in.

So why the difference? Why were my mattress and my feet pushing against the Aldi tent and not the Kmart one when they are both 7 feet in that direction? The answer: both are 48 inches tall, which means the wider (Aldi) tent needs more acute angles at the corners to achieve the same height with more surface area. This is not true of all 9′ x 7′ tents: a standard Coleman 9′ x 7′ tent and an AmazonBasics 9′ x 7′ tent are both closer to 59 inches at the center. On the other hand, Walmart’s Ozark Trail 9′ x 7′ tent, like the Adventuridge, is 48 inches … and, perhaps not coincidentally, the Ozark Trail price is much closer to the Adventuridge than the Coleman and AmazonBasics.

I suppose a shorter height has some advantages — it gives the Aldi tent a little lower profile, which could be beneficial in higher winds — but it also means the Adventuridge’s usable space is a little less than some other 9′ x 7′ tents, and can even create some issues along the edges that a 7′ x 7′ tent of the same height might not have. A sleeping mat that has a lower profile might have less of a problem, but with an airbed, cot, or other raised surface this height issue is a consideration.

All of this is less of a problem if you’re using this tent solo, since an easy solution is to turn the airbed to where it is along the 9-foot side of the tent, with one side of the airbed facing the door. You could also turn two mattresses this way, but you’d have less space between them and one person would have to climb over the other to reach the exit.

We camped out in hot, humid summer weather, but we found the tent ventilated pretty well for a small tent. The door window and back window provide some airflow, as does the fly when paired with the rear guy line. Also, as our experience with the tent involved dry conditions, we can’t say how watertight the tent is, but with any tent we think it’s a good idea to treat the tent with tent sealer.

UPDATE (September 2017): A few months after this post, our fly hoop pole splintered. We documented our warranty process with the manufacturer right here.

UPDATE (June 2020): We’ve had the tend for three years now, and it appears to be doing well under occasional use. Seams look good, as do the zippers.

Although there’s a bit of a learning curve to it, the Adventuridge 4-Person 9′ x 7′ Dome Tent is a decent option for people looking for 1- or 2-person camping accommodations. It’s a little shorter than many other 9′ x 7′ tents — which cuts down some on usable space — but it’s also maybe the cheapest 9′ x 7′ we’ve seen anywhere, and it’s backed by a 10-year warranty. That, combined with a nice featureset, makes this tent worth at least a look for the budget tent camper.