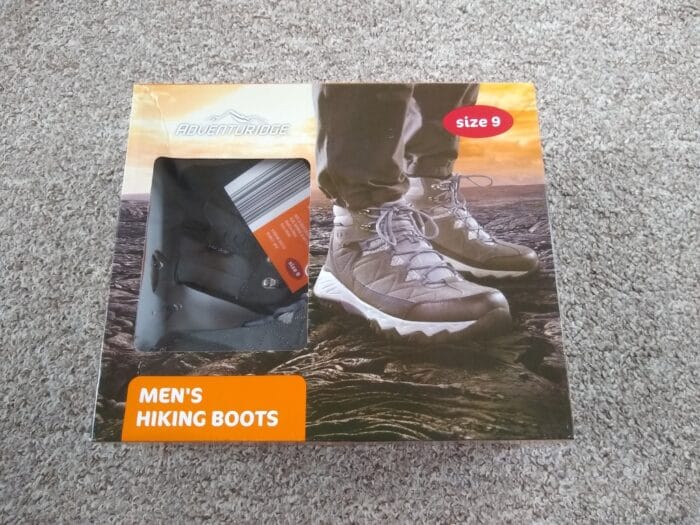 EDITOR’S NOTE: Updated below with a one-year progress report.

I’ve done enough walking in the woods to know that shoes matter. On a paved trail or even a flat earthen treadway, a simple pair of tennis shoes will do the job, but if the trail gets moderate to rough, athletic shoes are not ideal. With the combination of elevation changes, rocks, and other hazards like mud, there are more opportunities for either you or your shoes to get hurt.

In my experience, dedicated hiking shoes have a few benefits. One, they usually have hard soles — unlike the flexible soles of athletic shoes — that are more resistant to being damaged by rocks and help provide better stability on uneven surfaces. Two, they are usually of a stiffer construction that helps keep me from slipping or falling. (Preventing injuries is a top priority when hiking.) Three, they’re typically waterproof, which is helpful when hiking in muddy or waterlogged conditions.

Good hiking shoes aren’t cheap, typically running from around $50 up to hundreds of dollars. So when one sees a price tag much lower for that, you might be wondering: what are you getting?

Now, Adventuridge Hiking Boots are an ALDI Find, meaning you can only find them in stores for a limited time. In the year we bought them, they were $19.99 for a pair, or less than half the cost of most of the lower-end hiking boots I’ve seen out there. They come in both men’s and women’s versions, and we tested both. 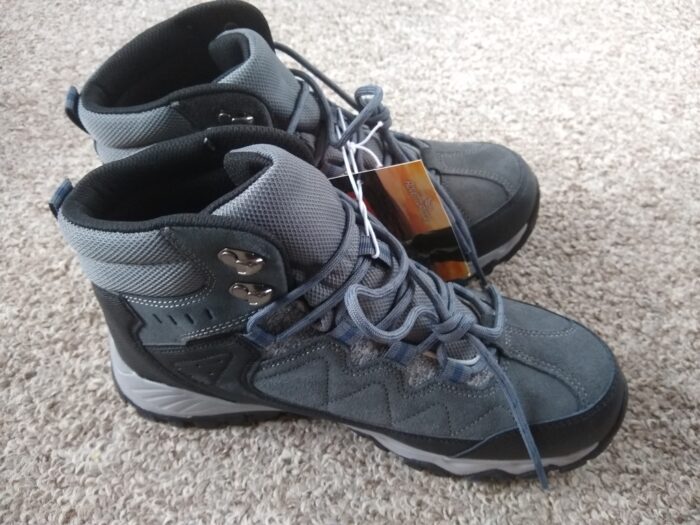 This is the second type of hiking footwear I’ve seen from Aldi. For a couple of years, Aldi sold Adventuridge Hiker Boots, although those were more akin to hiking shoes. These, on the other hand, are veritable hiker boots, with uppers that cover the heels and lower ankles.

The packaging boasts that these boots have a genuine leather upper, a waterproof membrane, and a phylon midsole with TPR (synthetic rubber) outsole. The packaging does not say who made it, other than noting that it was made in China. The boots also do not come with a warranty. 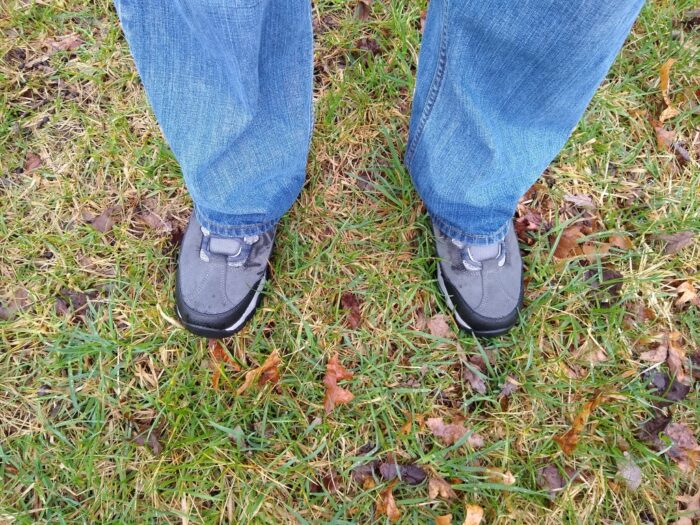 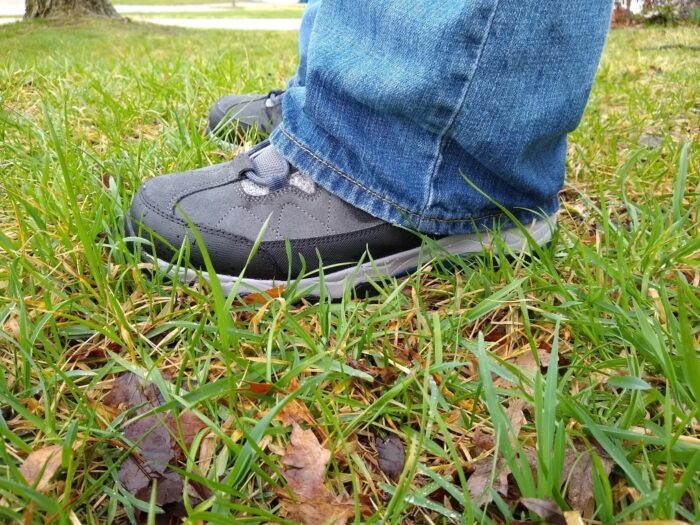 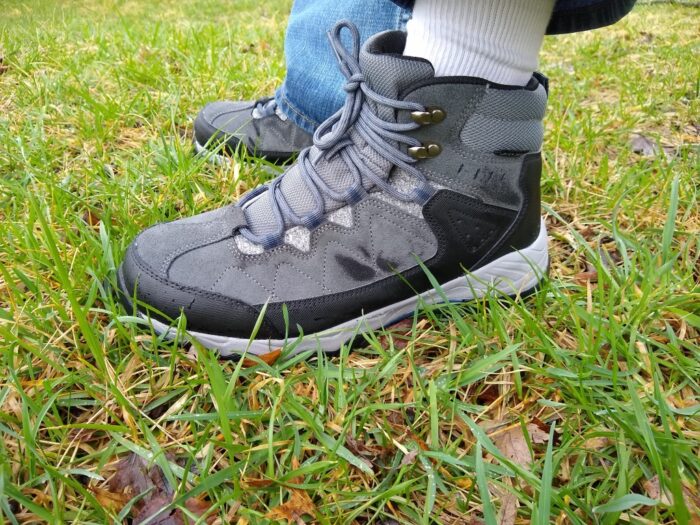 Men’s boots, with my cuff pulled up. The dark spots are water from a recent walk. (Click to enlarge.)

I tested the boots in a couple of different places. One test took place on simple pavement during a rainstorm. The other was a hike along a rocky, unpaved, moderate-grade trail that included a couple of short but steep inclines, a slick wooden bridge, and significant standing water on a muddy path from a previous night of heavy rain. In both cases, the temperature was in the lower 40s.

I’m happy to report that the boots did well in every test. The boots were secure on my feet, despite the mud’s best efforts to pull them off, and my socks came out dry in both excursions, even though I was walking in water that was sometimes 1-2 inches deep. The boots felt firm but comfortable, and after a while I even forgot I was wearing them, which is a testament to how well they performed. (My family, all of whom were wearing tennis shoes, were not nearly as comfortable.)

The biggest question mark with off-brand footwear like these is longevity. On that front, I do have some experience from my last pair of Aldi hiker boots. I’ve owned those for about two years now, and they’ve held up well through maybe 20 or so hiking excursions and a handful of other short outings, including some light snow. I’m not a professional hiker but I do like getting into nature, and these are my go-to boots when that happens. My old boots are not done yet, either, so based on that, I’m hopeful that these new ones will be good for a while. 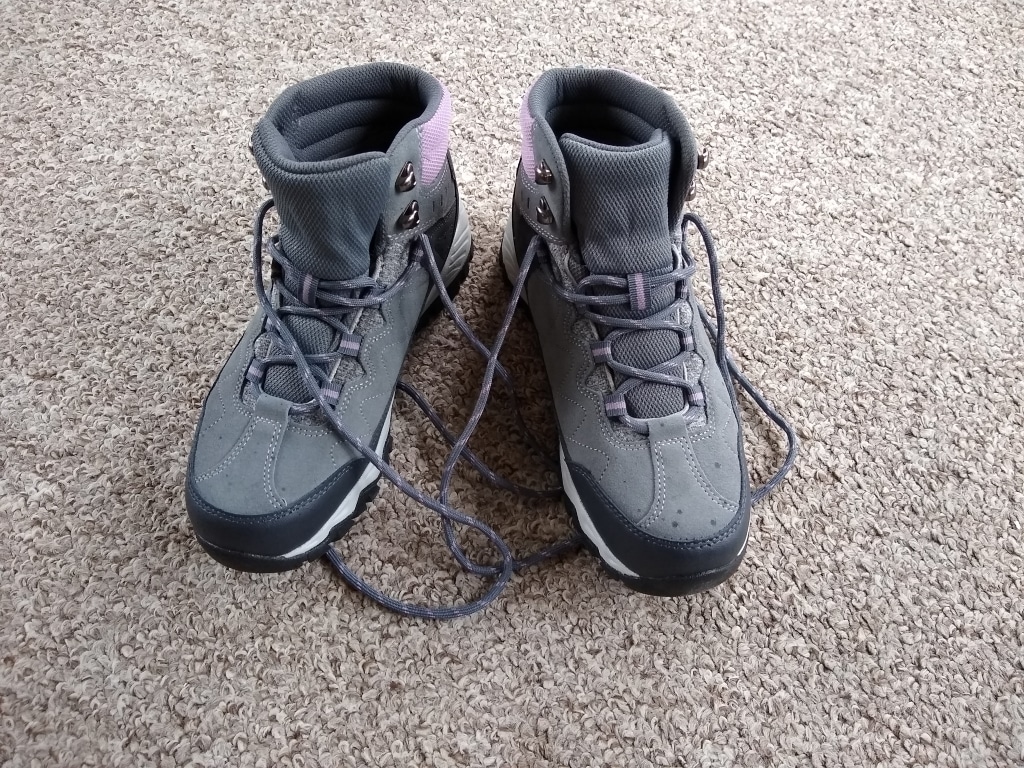 The women’s hiker boots have similar specs to the men’s boots listed above: a genuine leather upper, a waterproof membrane, and a phylon midsole with TPR (synthetic rubber) outsole, and manufactured in China.

These run a little large in the women’s sizes. I normally wear an 8.5 or 9 in women’s. When I picked up these hiking boots, my Aldi had them in a size 8 but not a 9. I tried on the 8s, thinking they’d probably be more snug than I preferred. However, they are roomy enough, especially in the toe area, that the 8s fit more like 9s. The size 8 pair works perfectly for me in terms of fit. 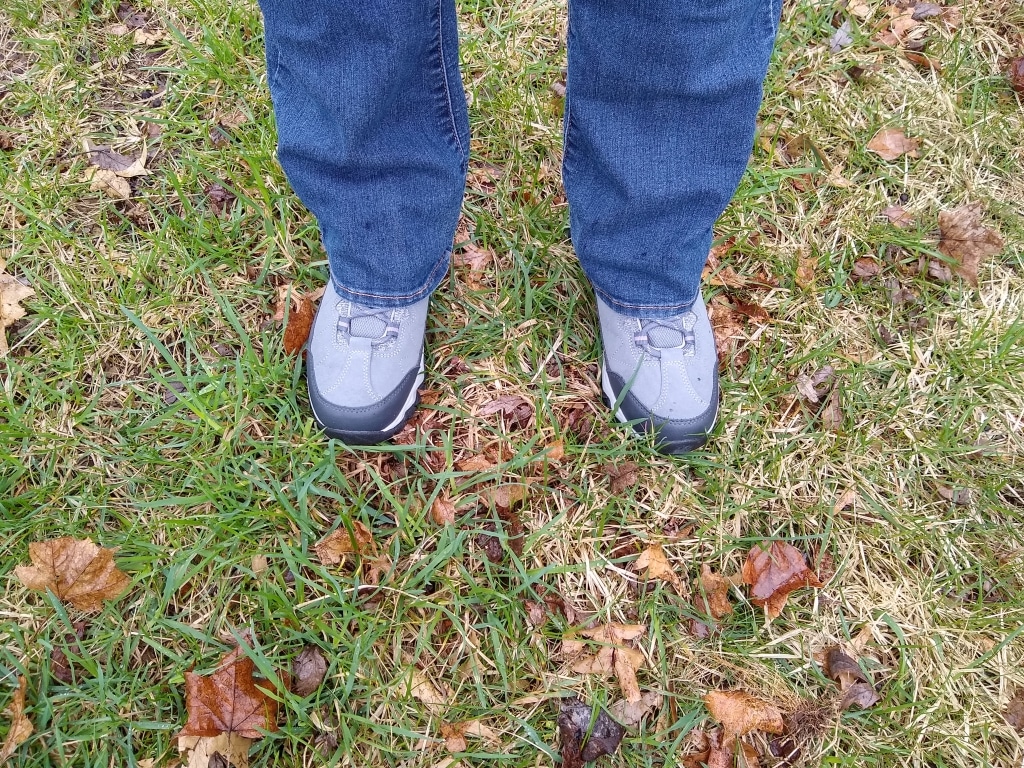 The first thing I noticed upon lacing them up, besides the fact that they run big, was that the tongue is on the short side. This is not an issue with the men’s boots. I tried to pull the tongue up as much as I could, but I had to be careful how I tied my laces so the tongue wouldn’t fall below the laces. After a walk around my neighborhood, the tongues on my women’s boots had fallen slightly below where I tied my laces. It’s not a deal breaker, but it is a minor annoyance.

It took some time to break these boots in, as evidenced by the red, raw spot on the back of one of my heels after a couple of walks. I took a break from wearing the boots for about a month to allow that spot to heal, and then I wore the boots for an hour-long hike in the woods and had no problems, so I think my skin has toughened up or formed a callous where it needed it.

One of the things I like best about these boots is that the soles have a good firm grip on the ground beneath me. I bought a pair of tennis shoes last year from Aldi, and the soles were a bit slippery, especially on hard floors, and the soles wore out after a few months and became even less grippy. I have hope that these hiking boots will perform better.

These boots also provide good ankle support, and they remained dry and comfortable inside even when I walked through puddles on a wooded trail. I’m looking forward to wearing these for a while to come. 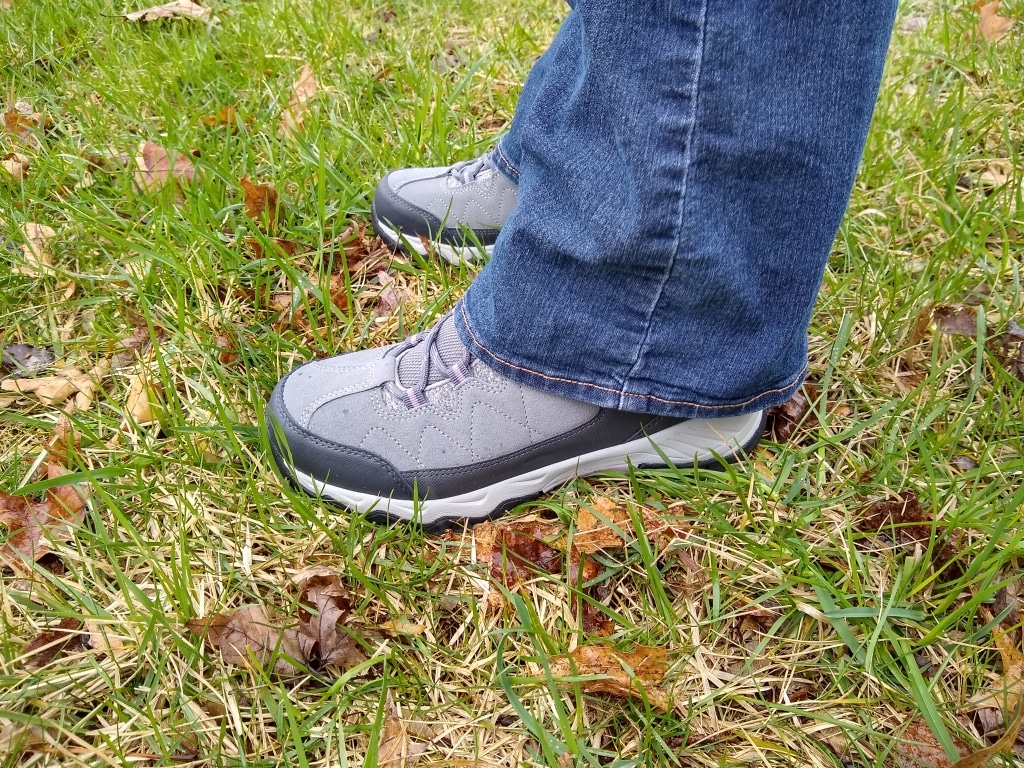 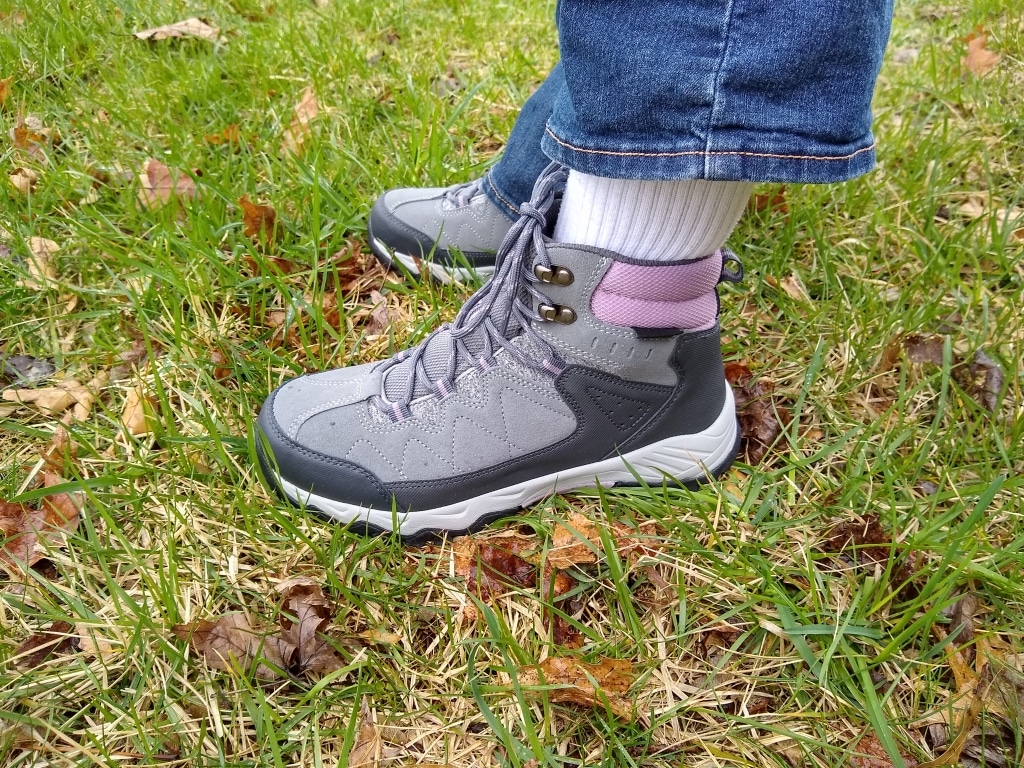 …. and with the leg cuffs pulled up, women’s boots. (Click to enlarge.)

Update (March 2021): After a year of occasional use all of our hiking boots continue to hold up well, even as we’ve taken them through rain, mud, and even snow. We continue to use them when we head into difficult terrain.

As someone who likes to hit unpaved trails from time to time, I liked Aldi’s hiking shoes a couple of years ago, and both Rachael and I like these boots now. They’re firm, comfortable, and have a rugged exterior that keeps the water out. Based on past experience, I’m hopeful we’ll get to wear them for a while.