The Aldi tagline is a subtle nod to the proper spelling. Credit: Aldi

In recent years, I’ve become more aware of how people write and say the name of a certain German supermarket. For the average person, how people write a store’s name is probably not that big of a deal. But I’m not necessarily the average person. I write about Aldi. A lot. And I’ve been writing about it for a while. That means I’m more focused on the small details, like using the right language regarding Aldi products or even making sure I capitalize things correctly.

I do see my share of misspellings, like Aldo (a clothing and accessories retailer) or Audi (a car manufacturer), but I’m not talking about those, since those are probably autocorrect’s fault rather than a deliberate decision. Instead, I’m talking about the different ways that people intentionally — and incorrectly — speak and write about the grocery store.

I personally know a lot of these people. I have friends, relatives, and acquaintances that routinely call Aldi something other than Aldi. In many cases, they’re educated. In some cases, they’ll even admit that what they see on the sign is not what they say or write. But they still keep calling it what they call it, maybe out of habit.

Those misspellings are so common that you don’t have to look far to find them, and in most unexpected places. During my research for this piece, I found a YouTube channel (that I won’t name) with hundreds of thousands of followers that posted a detailed video review about an Aldi product. That video was professionally done, had several hundred thousand pageviews … and consistently used the Aldi name incorrectly: in the title, in the description, and in the video itself.

Why the Store is Called Aldi 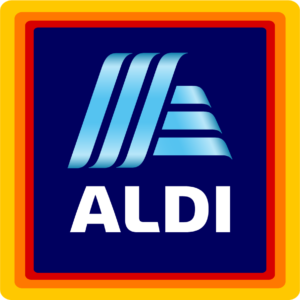 There is a history behind the Aldi name. After World War II, two German brothers — Theo Albrecht and Karl Albrecht — took over a grocery store that their mother had founded. At first, they named it after themselves, calling it Albrecht KG. (KG is a German term for a limited partnership.) As the company expanded in the 1960s, though, Theo and Karl decided to rename their stores. They settled on Aldi, which was a combination of their name along with the German word for discount. Albrecht Diskont — note the first two letters in each word — was mashed into one word: Aldi.

Aldi isn’t the only company to come up with a name that’s created from multiple longer words. In 1962, around the same time that the Albrecht brothers were splitting up their company, a middle-aged entrepreneur named Sam Walton opened Wal-Mart Discount City in Rogers, Arkansas. Wal-Mart, as it was then known, was a combination of Sam Walton’s last name along with the word mart, a mostly-outdated term for a market. Later, the company would tweak it to Walmart.

Other examples of companies with mashed up names include Hy-Vee, which is a combination of the two founders’ names. There’s Kmart, which, like Walmart, combines an owner name with the term mart. Costco, which is a shortened version of Cost Company, also falls in this list.

Why Some People Call it Aldi’s

There are any number of reasons why a person might call it Aldi’s rather than Aldi. I think one reason is that some people assume in their minds that Aldi is a name.

Since many companies use a possessive noun like that, shoppers may either assume Aldi is also a possessive, or they may just automatically add a possessive like they do with other store names.

Why Some People Call it Aldis

Believe it or not, searches for things related to “Aldis” are not uncommon. This one is a little harder to figure out than Aldi’s, but I have a theory on it, too.

Some companies named after owners do not use an apostrophe. This is most common when an owner name ends in s. One big example is pharmacy giant Walgreens. Some of the most common examples, though, come from the grocery industry, including regional supermarkets Wegmans, Schnucks, and Albertsons.

Because there are a fair number of grocers that end with an s but have no apostrophe, it’s not hard to see shoppers applying the same logic to “Aldis.”

Whatever the reasons, I expect those ways of saying Aldi to be with us as long as Aldi is.