The weekly Aldi ad usually has a Fresh Meat Highlight section that features a rotating array of limited-time special cuts of meat. These are found in the store’s refrigerated meat section, and selections can range from certain cuts of beef, pot roast kits, lamb loin chops, butterflied lamb legs, or really any fresh meat.

When Aldi recently sold stuffed salmon as a fresh meat highlight, I picked up a package to try. My family already enjoys the Mediterranean Herb Atlantic Salmon that Aldi sells fresh all year, so we were eager to try more salmon from Aldi. 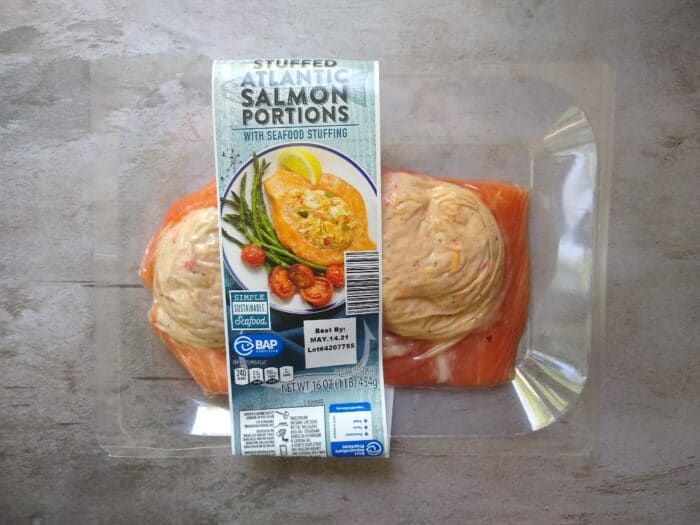 Aldi Stuffed Atlantic Salmon Portions cost $9.99 at the time of publication for a 16-ounce package containing two stuffed salmon portions that serve four people, which comes out to about $2.50 per serving.

As mentioned above, these are found in the refrigerated/fresh meat section and are an Aldi Find, which means they’re only in stores for a short time, and remember that Aldi does not offer online ordering for its specials after they sell out in your local store.

This salmon is Best Aquaculture Practices certified. It was farm raised in Chile and packed in the United States.

If you’re watching out for allergens, this contains salmon (fish), crab, wheat, eggs, dairy, and soybeans. 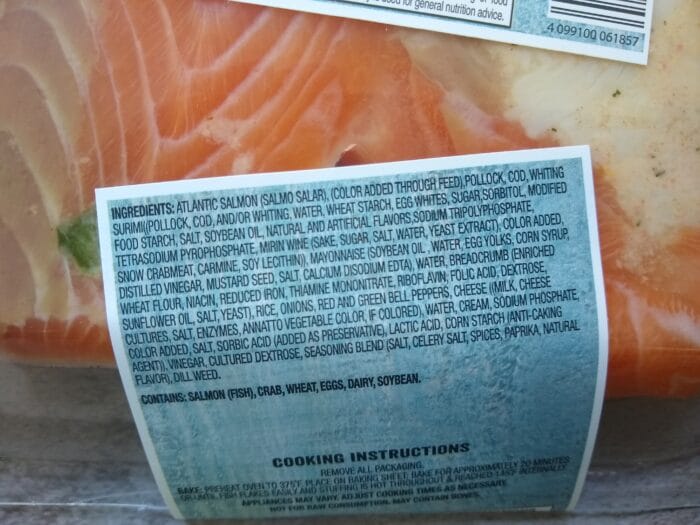 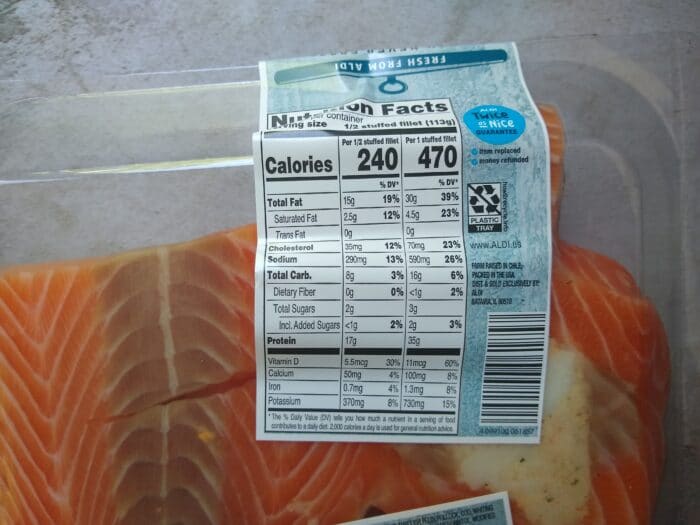 The package has instructions for baking in the oven. First, remove all packaging. Then preheat the oven to 375 degrees Fahrenheit. Place the salmon on a baking sheet and bake for approximately 20 minutes or until fish flakes easily and stuffing is hot throughout and has reached 145 degrees internally. The package states this is not for raw consumption and also warns this may contain bones. 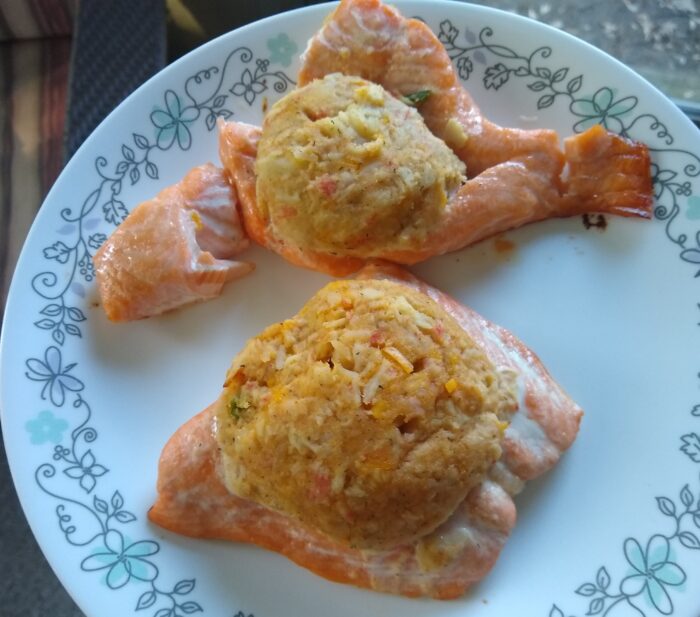 The salmon after baking.

Our salmon was done in the oven after about 19 minutes. My family thought this salmon was all right. The salmon itself does not appear to be seasoned. There’s a generous amount of filling, which is bready with mayonnaise notes and reminds us somewhat of crab cakes or stuffed clams, with small bits of peppers and celery coming through. Any surimi or crab that’s in the filling is in very small amounts. The rice is visible but seems to blend in with the breading, and we didn’t really notice cheese in the filling although it’s listed among the ingredients.

Overall this is good, but no one liked it enough to convince me to buy it again in the future. I think we’ve been spoiled by how flavorful and zesty Aldi’s Mediterranean Herb Atlantic Salmon is, and it’s hard for other types of salmon to compete.

Aldi Stuffed Atlantic Salmon Portions feature salmon fillets filled with bread crumbs with a smattering of surimi, peppers, onions, and seasonings. If you’re trying to get more fish or salmon in your diet, this isn’t the worst way to do it.