Yesterday I bought the Ambiano Egg Cooker that is currently for sale at my local Aldi for $12.99. I tried it out this morning, and so far, it seems to work well … but I’m not sure if it’s worth the price tag. Here are my thoughts. 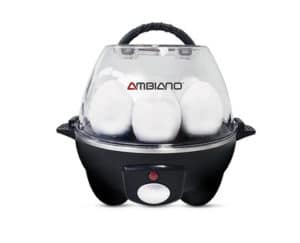 I don’t know why, but I didn’t realize it would be so … cute! It’s smaller than I expected and looks adorably like an egg. All of the accessories fit inside its plastic dome, so if you want to keep it on your counter, it’s very space-efficient.

The machine comes with several accessories, including: 1) a measuring cup that indicates the various water levels for how many eggs and what cooking method you’re using (see photo), 2) an attachment on the cup for piercing the egg before boiling (so it doesn’t “explode,” according to the strongly worded manual), and 3) two plastic holders for making either a 2-egg omelet or poaching 1-2 eggs. 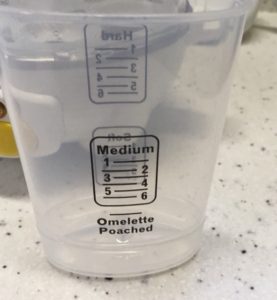 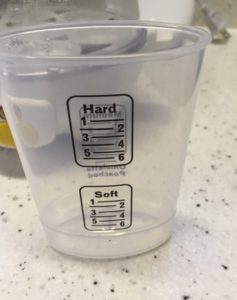 I don’t like cooking in plastic because I worry about the chemicals leaking into my food, so I won’t be using the omelet or poaching attachments. If that doesn’t bother you, then these look to be convenient and easy to clean. 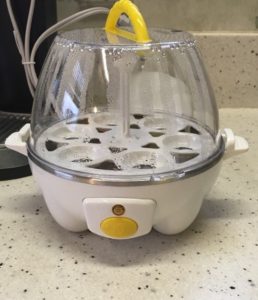 Setting up the machine is easy. Before using it for the first time, you wash the detachable pieces with soap and water and then re-assemble as needed to make a 2-egg omelet, 1-2 poached eggs, or up to 6 soft-, medium-, or hard-boiled eggs.

I tested the machine by making a soft-boiled egg for my breakfast. A perfect soft-boiled egg has a firm white layer with a half-cooked yolk inside. It’s a favorite of mine, but I’ve struggled with getting the exact right level of “doneness” when cooking eggs on the stove because it’s so easy to overcook them and end up with medium- or hard-boiled eggs.

I followed the instructions to make my egg. First, I filled the included measuring cup with the right amount of water (which is clearly and conveniently labeled on the cup itself) and add that to the machine. Then I pierced the egg on the blunt end with the attachment on the bottom of the measuring cup (It has a cover, so don’t worry about hurting yourself when you use the cup — but warn your kids if they are going to use it). I put the egg in the holder, slid the lid into place, and pushed the “on” button.” Now I just had to wait until it beeped to tell me my egg was ready.

It’s important to note that this machine does not cook your eggs faster than a traditional stove top recipe (except perhaps you might wait longer for the water to boil if cooking on the stove.) It took my egg about 8 minutes to cook, and that was only for a soft boil. I made toast while the egg cooked, but it was already cold by the time the egg was done. (Next time I’ll wait a few minutes before starting my toast.)

This is certainly more convenient — and fool-proof — than boiling an egg, but it’s not much of a time saver otherwise. 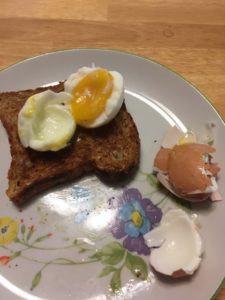 After much anticipation, my egg was ready. The machine gives out a long, high-pitched beep when it’s done. It’s not particularly loud, though. I almost missed it even though I was only a foot or so away because I happened to be running my disposal at the time. If I’d been in another part of the house, I might not have heard it at all.

I used a towel to pick up the hot egg because, as the machine warns you, the egg is very hot when it’s done. But I didn’t consider that it would also be wet and slippery. The wet egg slipped out of my towel and onto the floor, where it cracked. It didn’t go to waste, though, because it didn’t split open entirely. Next time I’ll use tongs!

My egg was hard to peel, thanks to its tumble to the floor, but it tasted perfect. The white was firm but not rubbery, and the yolk had that perfect half-cooked texture that makes it easy to spread on buttered toast. I appreciated that I had almost no clean-up after I was done, since I didn’t dirty a pan to cook the egg.

I liked my soft-boiled egg, but I was disappointed that the only way I could use the Ambiano Egg Cooker for omelets or poaching would be to cook my food in plastic and face potential chemicals leaching into my food. I’m not sure if it’s worth $12.99 — and the valuable space in my small kitchen — for me to occasionally eat soft-boiled eggs more conveniently. I might take it back and just resign myself to learning to properly boil eggs on the stove.