My personal weakness is chocolate, especially chocolate ice cream—BUT the one thing that can compete is lemon! My daughters have attempted lemon bars from scratch a few times recently but never quite managed what we were wanting.

When we walked into Aldi one day, this box mix was right by the door. For $1.99, I was excited to give it a try! 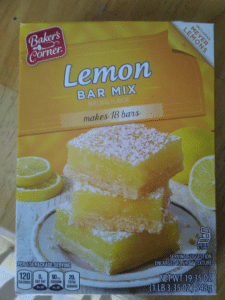 Baker’s Corner Lemon Bar Mix, which comes in a box that is just under 20 ounces, is an ALDI Find, so it’s only in the store for a short time. Inside this box, there are two separate packages for the crust and the filling. This mix requires water, eggs, and butter, which is very similar to boxed brownie mixes. 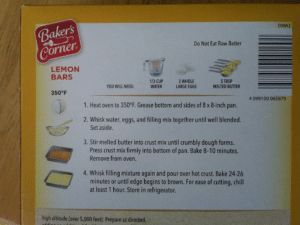 These went in the oven to bake when we sat down to dinner and were ready to eat before bedtime. It took a bit longer because they are to be chilled for an hour before serving. The serving size for these makes 18 bars, which we found to be a perfect size. Each bar is 160 calories, including 20 grams of sugar, when prepared according to the directions on the box. 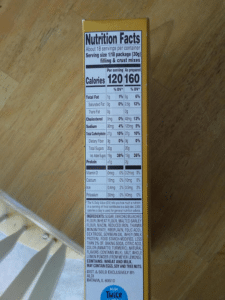 We decided to do a little comparison the next time we walked down the baking aisle at Walmart. While the Baker’s Corner Lemon Bars were similarly priced to the two versions we found on the shelf, the nutrition facts and required ingredients were surprisingly different. The Aldi lemon bars have more calories, fat, and sodium than the lemon bars from Betty Crocker and Krusteaz.  In addition, those from Betty Crocker even have a larger serving size! The last difference we noticed is that both the Betty Crocker and Krusteaz boxed mixes required fewer ingredients.

Overall, the Baker’s Corner Lemon Bars were good. The crust was crisp but still tender like a cookie. The filling was just the right combination of tart and sweet, and when we followed the directions it set up to a perfect consistency. We did add the powdered sugar on top, something that wasn’t in the directions but was in the pictures. They would probably taste fine without, but it just makes the bars more attractive. These are just what we wanted, and we consider this $1.99 well spent.

But after baking the mix from Betty Crocker and finding it indistinguishable from Baker’s Corner Lemon Bars, we have decided to buy that instead in the future. For the same price and taste, but fewer calories, fat, sodium, and ingredients, it just seems the better purchase.