EDITOR’S NOTE: Updated with a two-year progress report below.

Bauhn is the Aldi house brand for certain home entertainment electronics. An Australian-based company, Bauhn seems to focus mostly on speakers and headphones, with the occasional TV thrown in. (Other Aldi home electronics, like computers and tablets, fall to the German-based Medion.) Reviews of Bauhn products, as best as we can tell, tend to be mixed; their TVs in particular, tend to attract more than their share of concerns.

But when we saw Aldi was carrying Bauhn earbuds for $7, we decided to give them a look. 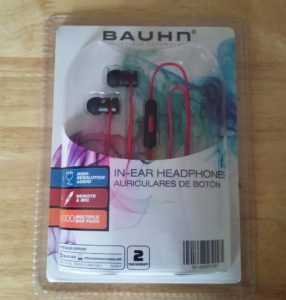 A note: the week these little things went on sale, Aldi was selling both in-ear headphones as well as earhook headphones for those who want something that will hang over the ears. We haven’t tested out the earhooks so we can’t speak to them.

So, on to the earbuds.

The Bauhn In-Ear Headphones come in your basic clamshell packaging, boasting, among other things, “high resolution audio” and a 2-year warranty. (Be careful cutting the packaging, as the manual and warranty card are big enough to accidentally chop up.) The contents include the headphones and three different sizes of eartips. The headphones feature buds at one end, a 3.5 mm audio jack at the other end, and a remote / microphone piece in between. The cable is flat, which helps to cut down on tangles. The manual doesn’t say, but the earphone casing feels like wood; more on this in a moment. 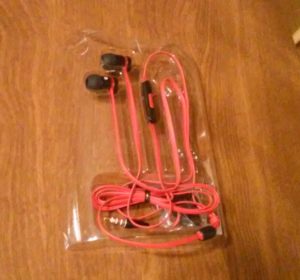 The remote / microphone piece deserves a bit of mention. It’s designed to work with both Apple products (iPod, iPhone, iPad) as well as Android ones. The top and bottom buttons control volume, while the middle button is a multifunction button that varies with the device. On my Android phone, tapping the middle button started and stopped music, while holding it down and releasing it opened up Google voice search. We also tested the microphone: it’s adequate but not stellar.

Before I start talking sound, a disclaimer: I’m not a professional audiophile. I’m just a normal guy who uses earbuds from time to time. I’m also pretty budget-conscious, so I’m in no position to compare these to, say, a $25 or $30 (or higher) pair of earbuds. My current buds are Phillips SHE3580, which I bought for around $10 after seeing rave reviews over at Head-Fi. In other words, I’m comparing these to another pair of budget buds.

That all said, in my experience, the Bauhns compare pretty well. Highs sound decent, and the base is strong and resonant without (to me, at least) being overbearing. (Mids came out okay, too.) I flipped back and forth between the Bauhns and my SHE3580s, and I found them similar, with perhaps a little more bass from the Bauhns. I should also add that this was during the early stages of use; this may be important since there is some evidence that earbuds sound better after being used for a bit. It’s quite possible these might get better with time, and they’re not bad right out of the box. If these are wood — and they feel like it — that may account for some of the quality.

UPDATE (June 2019): The cord appears to have developed a short right at the point of the 3.5 mm plug. If I jostle it around I can get it working, but any movement causes the left ear plug to go out, so it’s not really viable for using on the go, and in my experience these things typically get worse. It’s about 3 months outside its 2-year warranty, so there isn’t much I can do about it at this point.

With tangle-free cords, a microphone / remote combo, and — most importantly — a pretty full sound that includes good bass, the Bauhn In-Ear Headphones are a competent pair of earbuds, especially for the $7 price tag. The 2-year warranty is a nice bonus.