Bauhn has been a regular in the Aldi universe dating back to before the beginnings of our site. A private label out of Australia, most Bauhn products fall in the category of consumer technology or technology accessories. In Australia, that has included the likes of televisions, while in the United States it’s mostly been about small electronics like phone chargers, tablet cases, headphones, and earbuds.

And clocks. In recent years, we’ve seen Aldi sell a number of clocks under the Bauhn brand. Some of those clocks have been borderline ridiculous in their complexity, while others have been simple and (mostly) effective. But never before had we seen a so-called “mood light” alarm clock, until now. 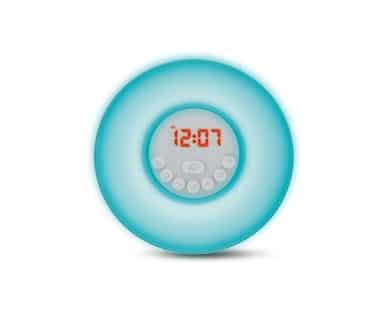 The Bauhn Mood Light Alarm Clock (product code 11619) is an ALDI Find (Special Buy), which means it’s only around for a short time. It retails for $17.99, a price well below other clocks of this type. Of note, it’s not just a mood light alarm clock, as it also will play nature sounds as well, a common feature in clocks like this one.

Notably, although it does have the ability to run on AAA batteries, Aldi doesn’t include any.

According to Aldi, the features include:

One of the big unknowns about the clock is its complexity: in the past, we’ve had issues with Bauhn clocks that can be difficult to navigate, although that seems to have improved of late. We also don’t know about the quality of the speaker in this device, which has also been a consideration in previous clocks. Finally, at the time of this post, Aldi has not yet posted a warranty on this clock, so we don’t know how good that’s for, or who services it.

Have any experience with this clock? Let us know in the comments!