I once had dinner with two French scientists who were working in the United States. I asked them what people in France thought of Americans, and one of them replied that the stereotype was of people who ate hamburgers and French fries. (Yes, the French associate French fries with Americans, not themselves.)

They have a point. Burgers and fries are as American as any food: if you don’t believe me, look at any business district and count how many restaurants serve burgers as either part of the menu or as the main part of the menu. From fast food to upscale dining, it’s not hard to find a burger in the United States if you want one.

Virtually every grocery store sells burgers. Most grocers use local brands or sell burgers under a store brand. You can often find them in one of two places: either in the fresh meat section, pressed into ground beef patties, or in the frozen section. While your average purist probably would say that fresh burgers trump frozen ones, as a burger fan I like both of them. And as a cook, I find frozen burgers to be a little easier to cook over the grill because they hold together better, although I’ve worked with both.

Aldi sells both fresh meat patties and frozen burgers. The frozen patties come in a few different varieties, but two of the most visible are the simply named “Beef Burgers,” which come in resealable plastic pouches. 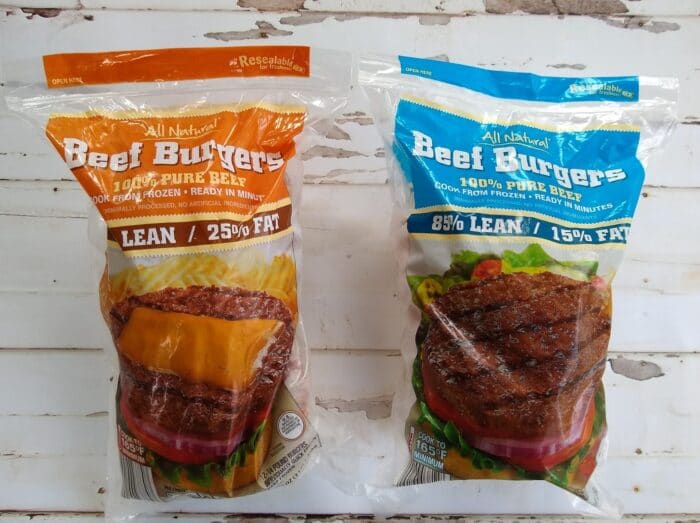 There is also a nutritional difference between the two burger types. The orange label is higher in fat and calories, while the blue label is a little higher in protein. Both bags list just one ingredient — beef — and point out that they’re “minimally processed” and contain “no artificial ingredients.” 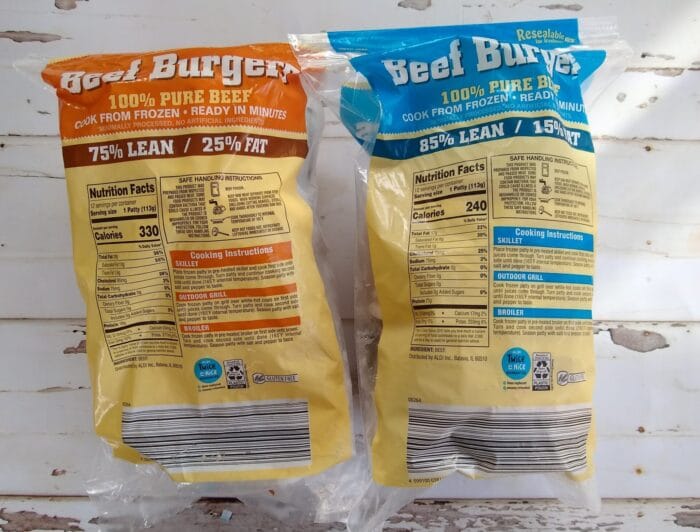 A Brief Note About Sourcing

My bags both listed the establishment number as 18076 and the beef as a product of the United States. According to the USDA, that establishment number refers to Green Bay Dressed Beef out of Green Bay, Wisconsin. Green Bay Dressed Beef is a subsidiary of American Food Group, which in turn is a division of Rosen’s Diversified, a holding company specializing in beef processing. According to Forbes, Rosen’s Diversified is one of the largest privately held companies in America.

I don’t know how Green Bay Dressed Beef runs its operations. My guess, though, is that this isn’t a free range operation. If things like pasture-raised beef are important to you, these may not be the burgers you want. Of course, if grass-fed beef is important to you, you probably aren’t going with a store-labeled bag of beef.

I sometimes have some trouble pulling the burgers apart, especially after they’ve been in the freezer for a while. I end up gently and carefully prying them apart with a butter knife. Each burger has a paper lining to help keep patties from being melded together, and the paper is usually pretty easy to remove.

In all cases, the instructions advise cooking to an internal temperature of 165 degrees Fahrenheit. While experienced cooks will have an idea when the burger is done, I prefer using an instant-read thermometer myself. It takes some of the guesswork out of making sure the burger is safe to eat without being overcooked. Your mileage may vary, but both the orange label and blue label burgers took me 10-12 minutes to cook through on a medium-high propane grill.

Not surprisingly, the higher-fat orange label burgers flared up more than the blue label ones. 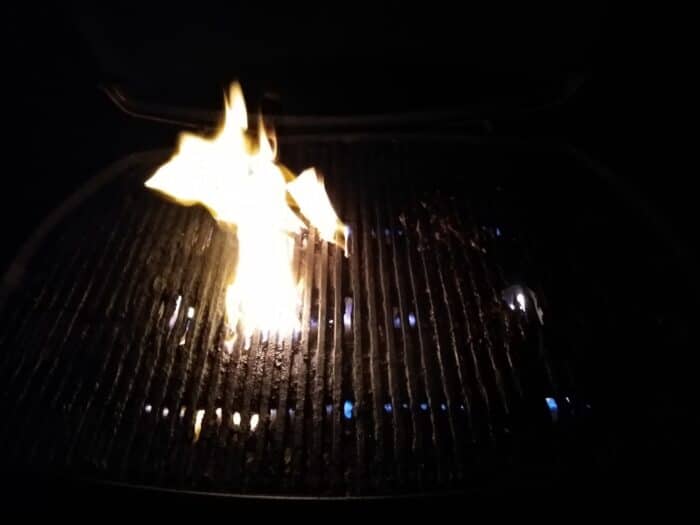 My grill (at night) after removing the burgers. The orange label burgers cooked on the left, while the blue ones cooked on the right. It’s not hard to see which one caused the bigger grease fire.

Our family members aren’t the only one who likes these. I’ve served these burgers — the blue label, in particular — to visitors in the past, and they’ve always been a hit. One of the more memorable examples came from a friend of my wife’s, who said she really liked the burgers … and she’s a farmer’s daughter. 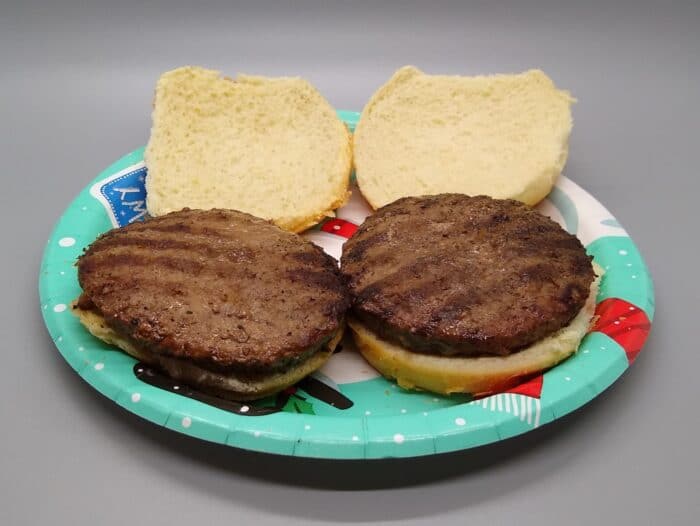 Aldi Beef Burgers are a reliable choice for cookouts when you need burgers. They’re reasonably priced, easy to cook, and taste great. The blue label bag is the more expensive of the two, but it’s also lower in calories and fat and is more popular with our family. The orange label bag is less expensive and has a taste not far off the pace of the blue label, but it’s higher in calories and fat. For my money, I’d go with the blue label in most cases.