For whatever reason, the French, if not the French language, seem to hold a monopoly on pre-meal foods. You don’t have to be particularly sophisticated to have heard the word hors d’oeuvre, a word that became so commonplace in the English-speaking world that the English tried — with some success — to counter with a word of their own.

In recent years, another word has gained attention: charcuterie. Technically it refers to the cooking of prepared meat products, but among American consumers it has become its own form of appetizer spread. Charcuterie boards have become quite the fad, with homes preparing spreads for all kinds of occasions.

Like many grocers, Aldi sells most of the components you would use to make your own charcuterie board. Or, on occasion, you can find a premade board at Aldi.

Columbus Craft Meats Charcuterie Tasting Board is a Seasonal Item. That means it’s around for part of the year and is restocked during that time. Our board appeared around the time of the winter holidays.

At the time of this post, the board costs $10.99. Like most pre-assembled items such as this one, you may well be able to make it cheaper if you assembled the components yourself. This, though, is one of those items you are likely buying because of the ready-to-go convenience factor.

Columbus Craft Meats is not an Aldi brand. Instead, it is a company that specializes in prepared meats. The company was founded a century ago in San Francisco, and in 2017 it was purchased by food giant Hormel Foods. According to the package, it is a product of the USA.

This particular board contains:

If you’re looking to match the board with an alcoholic beverage, the package suggests pairing it with Pinot Noir, Sauvignon Blanc, Pale Ale, or Amber Lager. 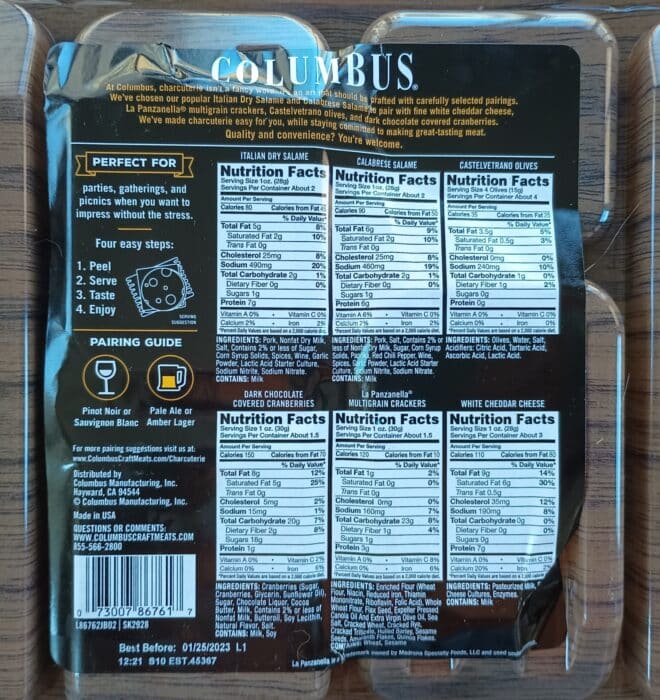 Using the board is as simple as peeling off the top plastic layer and setting it out. It should be refrigerated when not out for eating, and the plastic cover doesn’t reseal, so if your crowd doesn’t eat it all in one session, you’ll want to cover it with plastic wrap before putting it back in the fridge. 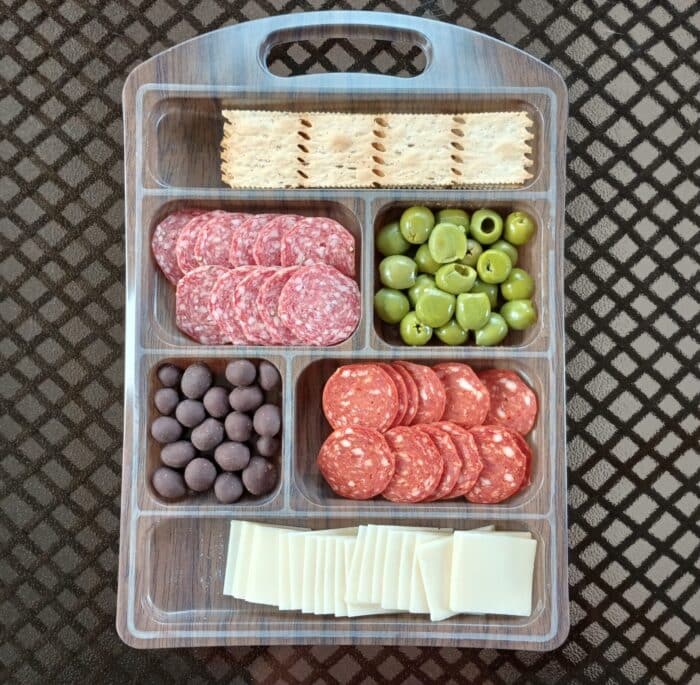 Out of the wrapper.

It’s a fun little spread. The various offerings are tasty, whether it’s the salty salames or the sweet dark chocolate covered cranberries. Your guests can layer the meats and cheese atop the crackers, pop an olive, or create a small variety plate of all of them. It’s a relatively small collection of options compared to a big charcuterie board, but what it does, it does well.

For $10.99, Aldi sells a peel-and-serve charcuterie board. It’s not a huge spread, but as a quick component to a party it’s easy. We liked all of the different parts, and while we’d probably prefer to buy the components ourselves, in a pinch this isn’t a bad accessory for your holiday gathering.