There are a number of ways to make macaroni and cheese. The best way, in my opinion, is the homemade baked stuff. Time doesn’t always allow that, though, so the next best option is to get the stuff that comes in a box.

Aldi sells different kinds of mac and cheese, both as Regular Buys and ALDI Finds (Special Buys). Among the Regular Buys, Aldi sells both a traditional boxed mac and cheese with powder, as well as a shells and cheese with a cheese sauce. Both are pretty good, and the powder version deserves some special note because Aldi has improved a not-so-good old formula and transformed it into something much better.

Those versions of mac and cheese, though, have limitations. For one, they require a stove top. For another, they make more food than one person should eat in one meal. Reheating it in the microwave later isn’t always ideal either, as mac and cheese can dry out a little that way.

For those who need portable mac that can be made in a microwave, Aldi sells it. 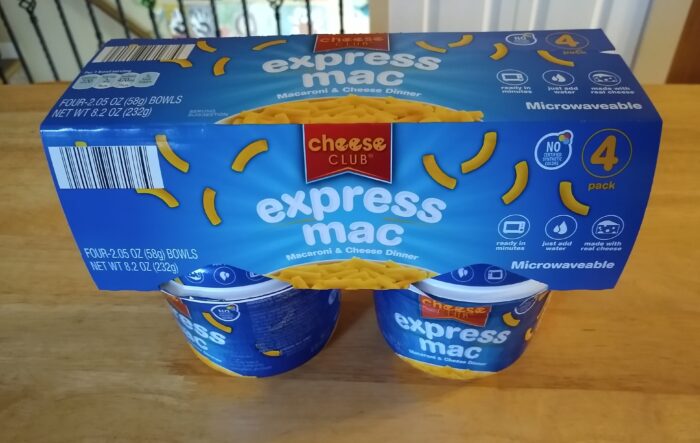 Cheese Club Express Mac Macaroni and Cheese Dinner is a Regular Buy, so you can find it in stores all the time. It comes in a pack of four 2.05-ounce bowls and retails for $2.75. That’s a fair bit more per ounce than Aldi boxed mac and cheese, but, at 33.5 cents an ounce, it’s less than Kraft Easy Mac, which runs at least 40 cents an ounce over at Walmart. And, of course, it’s portable. 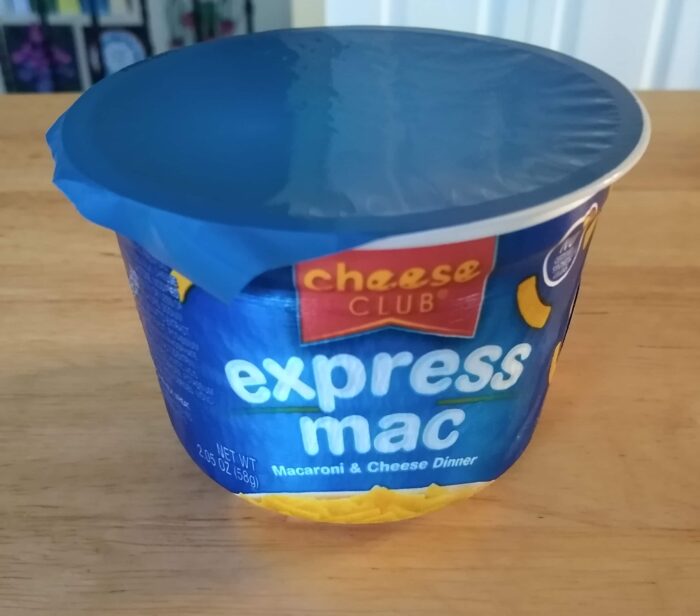 Making it is easy, and the only things you need beyond the package itself are some water and a utensil. To cook, you first remove the wrapper on top. Two, you remove the cheese packet inside and set it off to the side for now. Three, you add water to the bowl, filling it up to the fill line marked in the bowl. Four, you stir the water and uncooked noodles together — you’ll note there is a little powder in the noodles as well. Five, you microwave the water and noodles, uncovered, for 3 1/2 minutes.

When you remove the noodles from the microwave, you’ll notice there is a fair amount of standing liquid. Don’t drain it. Instead, add the powder and stir. The powder and water will thicken. It may be a little hot; you might let it sit for a minute or so before eating.

I wasn’t sure how this instant mac would taste. I was impressed, though. The noodles were soft and I thought the cheese mix had a nice flavor, enough that I didn’t feel like it needed any doctoring.

An instant mac like this is a processed food, and it’s got a label like you would expect a processed food to have. It’s moderately high in sodium — although a little less per serving than the boxed mac and cheese — and it has a pretty long list of ingredients. 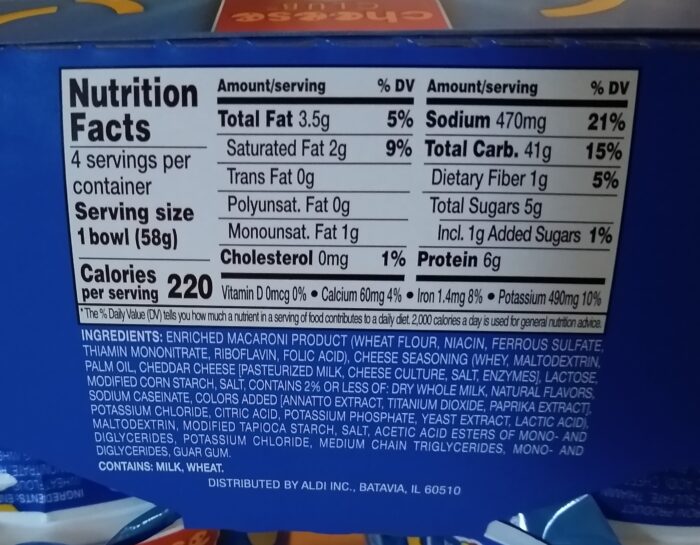 If you need a quick and easy single-serve macaroni and cheese meal, this is it. It’s easy to make, tasty, and cheaper than Kraft. It’s not the healthiest option, but it gets the job done in a pinch.