EDITOR’S NOTE: A year later we gave Cheese Club Macaroni and Cheese another try. You can read about it here.

Macaroni and cheese is an American staple. There’s no substitute for the homemade kind, but since making it that way takes some time, faster alternatives are pretty much available in every grocery store. In our experience, this is an area where the brand-name versions are usually superior to store-brand ones. In our house, when we can’t make it homemade, we buy Kraft; we’re particularly fond of their three-cheese version.

Nevertheless, Aldi dutifully sells mac and cheese, so we made it one day for lunch. 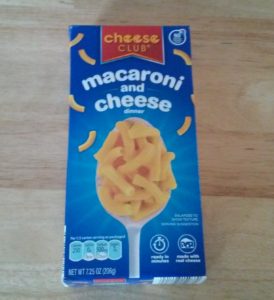 Cheese Club Macaroni and Cheese Dinner comes in your typical cardboard packaging, a little over 7 ounces of uncooked noodles and powdered cheese. The box claims three servings of a cup each, while also boasting that the cheese is real and the colors aren’t synthetic. This won’t be confused for a health food, though; once prepared, each serving has 390 calories and at least 500 mg — almost all of your daily allowance — of sodium. (An identically sized serving of Kraft Macaroni and Cheese has 350 calories and 570 mg of sodium.)

If you’ve cooked mac and cheese before, you pretty much know the preparation instructions. The box calls for bringing 6 cups of water to a boil, then stirring in the pasta. After 7-10 minutes, including occasional stirring, you drain the pasta (no rinsing, of course), then return it to the pot, and add 1/4 cup of margarine or butter along with milk (the box recommends 2% milk) and the contents of the “sauce packet,” which is less a sauce and more the powder you see with other mac and cheese recipes. You then mix it all up and serve.

Aldi’s mac and cheese is … rather plain. The noodles are okay, but the cheese sauce adds only a modest amount of flavor. My first instinct was to add salt, but as loaded as this is with sodium already (although not as much as Kraft puts in theirs), that didn’t seem like a good idea. A little pepper doesn’t hurt, but it doesn’t remedy its underlying lack of taste.

UPDATE (4/22/2017): After we first published this review, some readers suggested that we add cheddar cheese to the mix. So we decided to take a second stab at Cheese Club, this time with Happy Farms Shredded Mild Cheddar. 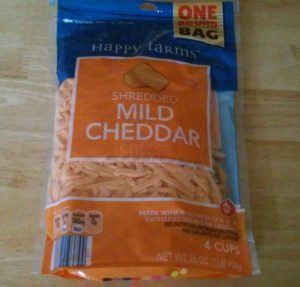 We mixed in a full cup of shredded cheddar with the butter, milk, and powder. 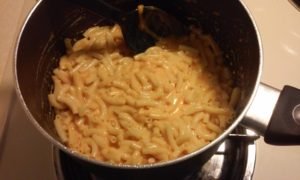 Was the second time the charm? Well, it was a little better, although we found it a little average on the taste side of things, which led us to finally break down and add some salt. With added salt and shredded cheddar, we think it begins to approach decent (and our kids liked it), although we still think it falls short of, say, a three cheese Kraft. Still, even adding shredded cheddar to Cheese Club Mac and Cheese is probably cheaper than Kraft, so it might be at least worth the tradeoff.

Cheese Club Macaroni and Cheese Dinner stacks up about like most store-brand stove top mac and cheese boxes: it’s very cheap, but it’s also rather light on flavor. For our money, we’d rather spend a little more on Kraft or another major brand, especially if we’re serving more than our immediate family, but if you’re on a tight budget you can doctor this up with some seasonings of your own, such as the shredded cheddar recommended by our readers, which does improve its overall quality. Even with added ingredients, though, this isn’t our first choice.