Skip to content
Home Features Does Aldi Have a Bakery?

Does Aldi Have a Bakery? 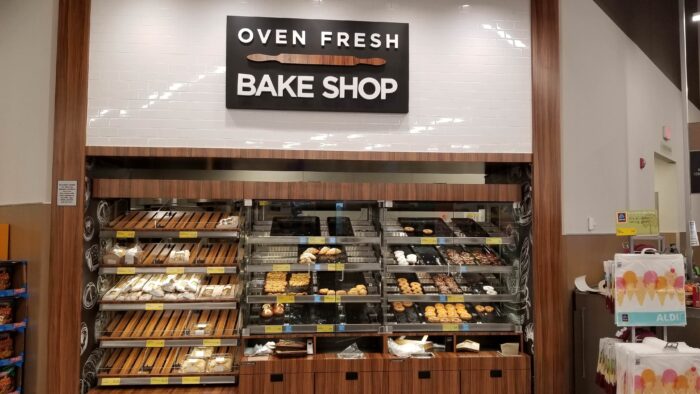 Aldi stores are known for being no-frills. They don’t have dedicated deli or meat counters with employees ready to dish up potato salad or slice your ham for you. They don’t have pharmacy counters or floral departments with their own staff. All of those things require additional employees, and Aldi likes to keep its operations lean. Most Aldi stores don’t have bakeries either.

But actually, some Aldi stores do have bakeries.

Sometime in 2018 or possibly earlier, select Aldi stores in Illinois, Wisconsin, and Maryland got bakeries as part of a test project to gauge consumer interest, with an Aldi store in Batavia, Illinois, where Aldi’s U.S. headquarters are located, being one of the more highly profiled stores with a bakery. According to Clark, other stores with bakeries include Elk Ridge, Glen Burnie, and Silver Spring in Maryland, and Greenfield, Pewaukee, and Oak Creek in Wisconsin. A Reddit thread also offers a more updated list with additional stores with bakeries, including some stores in Virginia.

These stores have a section with self-service glass wall cases filled with individual fresh-baked doughnuts, rolls, pretzels, bread, and other specialty baked goods that customers can purchase a la carte. Presumably, the goods are baked from frozen in store, as they are in large traditional grocery stores; so it’s not the same as buying from a dedicated bakery where items are made from scratch on location. According to the grocery industry site brick meets click, the cases at Aldi are stocked from the store’s rear production area, and customers put the items they want into a box or bag, similar to how other grocery stores operate their bakery departments.

At this point, we don’t know if Aldi plans to add bakeries to additional stores, and if Aldi does intend to add more bakeries, we don’t know what the timetable would be. In the meantime, if you find yourself traveling in an area that has an Aldi with a bakery, such as the Chicago suburbs, you might be tempted to drop in to see what all the hype is about.