In the 1930s, a British company called Rowentree’s developed a four-finger chocolate-covered wafer. Originally called Rowentree’s Chocolate Crisp, the sweet treat was renamed Kit Kat Chocolate Crisp in 1937, and the name was shortened further to Kit Kat after World War II. During the 1940s, Kit Kat was introduced into a number of English-speaking countries, including Canada, South Africa, and Australia. In 1988, Swiss company Nestlé acquired Rowentree’s and the Kit Kat brand.

Nestlé, though, doesn’t sell Kit Kat bars in the United States. The reason: in 1970, Rowentree’s contracted with the Hershey Company to distribute Kit Kat in America, with the license lasting as long as Hershey was not sold. Hershey has not been sold, so the Kit Kat license — which now exists between Nestlé and Hershey — remains in effect. At the time of this post, you can even find reference to the license in the fine print at the bottom of the Hershey Kit Kat website.

Success tends to breed imitation. While I haven’t seen too many attempts at a Kit Kat, I do sometimes see chocolate-covered crisps that aren’t Kit Kats at gas stations and big box stores. We even recently spotted some at the Godfather of brand imitation, Aldi, and with a name that borrows shamelessly from the famed Kit Kat jingle.

The Choceur Break Time Chunky Bar is, at least for now, an Aldi Find, which means you can only find it in stores for a limited time. Once they’re gone, they’re gone, and they won’t be back unless Aldi chooses to stock them again, whenever that might be. One can hope that someday Aldi will sell these as Regular Buys or even summertime Seasonal Favorites. In the meantime, Aldi does not offer online ordering if these bars aren’t in stock at your local store.

At the time of this post, a single 1.3-ounce bar costs 69 cents. That comes out to 53 cents an ounce. A standard brand-name Kit Kat bar runs about 65 cents an ounce, although you can get them in larger quantities for 35-45 cents an ounce. The Aldi bar, then, is cheaper than a single Kit Kat but more expensive if you’re buying a bunch of Kit Kats.

According to the packaging, the Choceur bar is a product of Turkey and contains cocoa that is Rainforest Alliance Certified. Like some other Choceur bars, it contains milk chocolate and hazelnut paste, which gives it a distinct flavor. (And one, I might add, that my family has come to like, especially in our s’mores chocolate.) It also has a number of potential allergens, including hazelnut, milk, egg, soy, and wheat, and with the potential for tree nuts and peanuts. 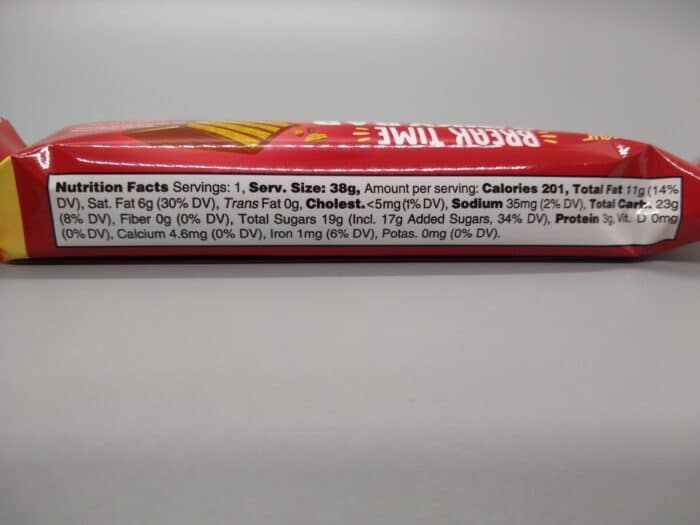 Our family liked these bars. They’re not identical to Kit Kats — they’re more chocolatey, with hazelnut, and are less crisp — but they’re really good. I’d go so far as to say that I like them better than a Kit Kat, and that’s saying something. Not everyone in my family had quite as high an assessment, but they all thought these Choceur bars were good. 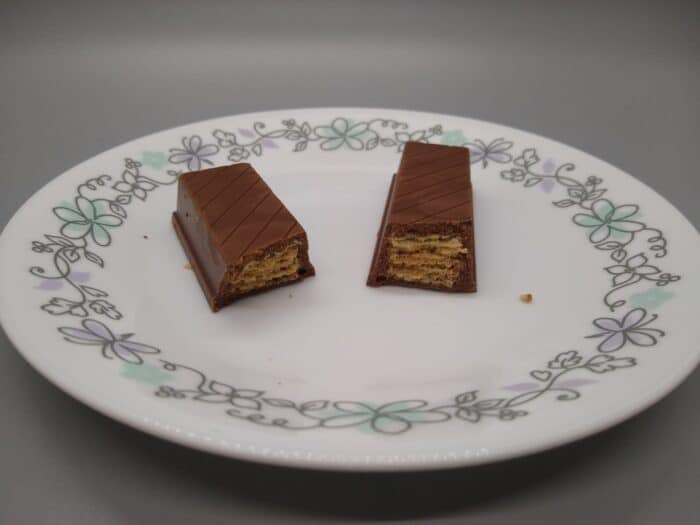 Aldi has made a really nice Kit Kat-inspired chocolate bar that also stands well on its own. It has a rich hazelnut chocolate flavor with a solid crispy texture. While I wouldn’t mind seeing Aldi make this an everyday Regular Buy, I’m not sure my waistline would agree. It’s worth a buy, though, if you’re a Kit Kat fan.