A while back, we learned of a new Aldi that had just opened in our area. We traveled down that way, marveling at the bigger aisles and larger selection, including a couple of things we’d never seen before. 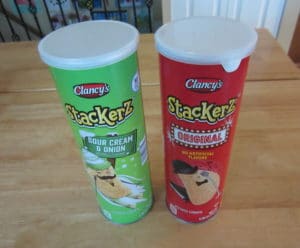 It might be tempting to assume from the shameless can design that these are the Clancy’s version of Pringles. Not quite. Instead, these are more of an imitation of Pringles’ lesser-known competitor, Lay’s Stax, which are thicker than Pringles and have flavoring on the inside curve of the crisp rather than the outside. Clancy’s Stackerz share both of those qualities with Stax. While that means Clancy’s Stackerz are thicker than Pringles, they’re also less of a mess to eat than Pringles. (One difference between Stackerz and Stax: Stackerz come in Pringles-style cardboard-and-aluminum cans rather than the plastic packaging Lay’s uses.)

At the time of this post, Clancy’s Stackerz come in two varieties: Original and Sour Cream and Onion. They run $0.99 a can. Curiously, the two varieties have different quantities: Original is 5.68 ounces (17.4 cents an ounce) and Sour Cream and Onion is 5.96 ounces (16.6 cents an ounce). Not sure why there’s a difference, but both are cheaper than the Pringles or Stax we found at our local grocers, so overall, they’re a good deal.

No one really eats these for their nutrition, but it is worth noting that the Stackerz are a little better for you than Pringles or Stax. All have 150 calories per 1-ounce serving, but Stackerz are lower in saturated fat (1 g to 2.5 g) and sodium (130 g to 140 g and 150 g) than the competition. Also, if gluten-free is important to you, both Stackerz flavors are — unlike Pringles — gluten-free. (At least some flavors of Lay’s Stax are gluten-free; be sure to check the packaging, though.)

In terms of taste and texture, these are a lot like Stax. If you’ve only done Pringles, that means that these have a thicker texture, but the taste is similar to Pringles, both with the Original and the Sour Cream and Onion. That said, if you really want your Pringles fix, Aldi sells name-brand Pringles in a limited selection of flavors alongside these. You’ll just pay a little more.

They look like Pringles cans, but the Clancy’s Stackerz are really impersonations of Lay’s Stax. And good impersonations, with the classic tastes we associate with Original and Sour Cream and Onion. Plus they’re cheaper than the name brands, they’re slightly lower in saturated fat and sodium, and also (unlike Pringles) gluten-free if that is important to you. Overall, we like them … but if you don’t, Aldi carries name-brand Pringles too.