While eating at a Mexican restaurant not long ago, a fellow diner who has been to Mexico several times mentioned that one dish on the menu — huevos rancheros — is a popular dish in that country. I didn’t order it at the time, but Aldi caught my attention recently when a jar of Cook House Huevos Rancheros Breakfast Sauce showed up as a Special Buy (ALDI Find). I bought a jar to try at home. 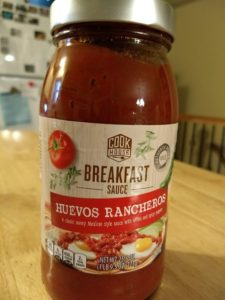 Aldi’s Cook House Huevos Rancheros Breakfast Sauce comes in a 25.5-oz. glass jar and is described as a “classic savory Mexican style sauce with onions and spicy peppers.” Huevos means eggs in Spanish, by the way. The sauce is described as mild, and I would agree; it is not spicy.

The jar contains a recipe/serving suggestion.

Salt and pepper to taste

This recipe makes one serving. The entire jar makes about 12 servings.

The jar also suggests drizzling sauce over the dish for a “fabulous finishing touch” or recommends that you “dip or dunk to jazz up your dish.”

I followed the suggested recipe, but I used flour tortillas instead of corn because my family prefers them. I warmed the huevos rancheros sauce in a sauce pan on the stove top and spooned it over the top of warmed tortillas topped with refried beans and fried eggs. I then topped it all with sliced avocado and served a prepared box of Old El Paso Spanish rice on the side. (Aldi used to sell a Spanish-style rice, but I can no longer find it in stores.) I bought all the other ingredients for this meal at Aldi. 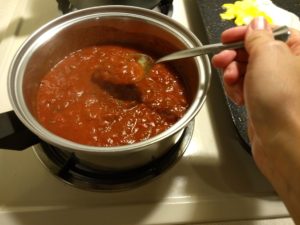 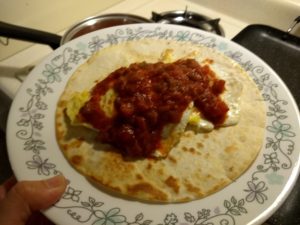 I put two fried eggs in each tortilla (if I had used corn tortillas, which are smaller, I would have put one egg in each tortilla). My family found that one tortilla was very filling and packed a protein punch with the two eggs and the refried beans. Instead of eating this meal for breakfast, we had it for dinner, or brinner.

The sauce tasted like a cross between salsa and a typical red sauce that tops burritos/enchiladas in Mexican restaurants. I cannot speak to how authentic the taste is because I’ve never had huevos rancheros before, but my husband, my 10-year-old, and I all enjoyed this dish. My picky 7-year-old didn’t care for the sauce and filled up on eggs instead. It could perhaps use a little salt — which the recipe recommends — and which I did not use but probably will next time.

The jar of sauce, by the way, is large. Our family of four only ate about half of the sauce, and I put the rest into a plastic container in the freezer to use later.

Aldi’s Special Buy (ALDI Find) Cook House Huevos Rancheros Breakfast Sauce comes with a suggested recipe on the back of the jar that involves fried eggs, refried beans, and tortillas. I have never eaten huevos rancheros before, so I cannot say how authentic Aldi’s sauce is, but my family found this to be a tasty and filling meal. The jar contains enough sauce that we will get more than one meal out of it. If you like Mexican food, this is worth a try.