Aldi probably isn’t the first place you think of when you think of golfing supplies. Nevertheless, the grocer rotates in a small stock of golf-related accessories as part of its limited-run ALDI Find (Special Buy) section, usually during the late spring and early summer. While some of those accessories are only the kinds of things golfers would buy, other accessories might have some value on or off the links. 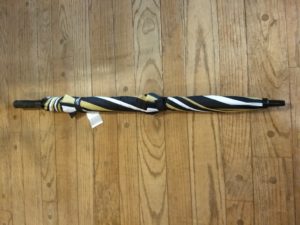 The Crane Large Vented Golf Umbrella, which ran $7.99 at the time of this post, is an ALDI Find, which means it’s only in stores for a short time. It comes in a few different colors and styles. The price is, as you might expect from Aldi, much cheaper than most other golf umbrellas we’ve seen online. The packaging does not indicate who manufactures the umbrella, nor is there any sort of warranty or after-sales support attached to the umbrella.

If you’re used to golf umbrellas, this is about middle-of-the-road for size. If you’re not used to golf umbrellas … well, chances are, this is bigger than any other umbrella you own. Fully retracted, it’s about 39 inches long. The packaging says the canopy is 53 inches wide when open; when we measured the canopy ourselves from end to end (just straight across, not accounting for the curve of the umbrella) the canopy had a diameter of right at 48 inches, or 4 feet. 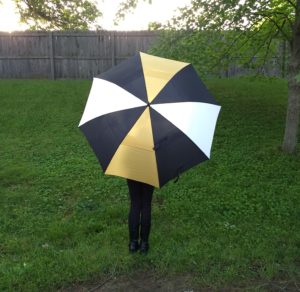 The umbrella in the hands of an upper grade school student. (Click to enlarge.)

The canopy is 100% polyester and can be strapped down with two Velcro straps. It is vented, which allows air to pass through the umbrella — rather than pull it like Mary Poppins — while still keeping rain out, While the packaging does not indicate what the shaft is made out of, it appears to be fiberglass. The spring and arms at the top appear to be made of metal. The umbrella has a hard plastic ergonomic handle with an automatic open button. 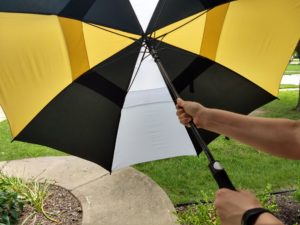 The umbrella is pretty simple to use: push the button to open, and pull the metal ring along the shaft down until it clicks to close.

A few observations. One, it is definitely big; a person and gear (or two or three people) could fit under this umbrella and stay relatively dry.

Two, because it is big, it is heavier than smaller umbrellas. I found that, if I just held it out in one hand, that the weight of the umbrella would become noticeable after a while. Holding it with two hands or resting it over one’s shoulder helps, but be aware that if you’re outside with this umbrella open for extended periods, you’re going to notice it. 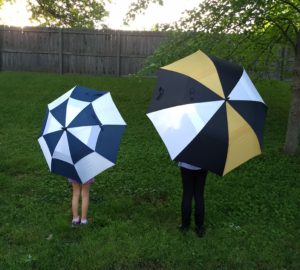 Three, it’s a nice looking umbrella. Aldi has been selling Crane golf umbrellas for a while now, but this model looks good. One related touch: in years past the word “Crane” was printed prominently on the umbrella, but that was not the case here. (It is printed on one of the small Velcro straps.)

Umbrellas don’t always have a reputation for longevity, so we can’t say how long this one will last. It does seem well-built, though, and for the price, longevity may not be the biggest consideration anyway.

At $8, you won’t likely find an umbrella this large for this cheap many other places, if anywhere else at all. The Crane Large Vented Golf Umbrella is easy to use, functional, and even a little stylish. It is a little heavier for its size, but if you need something wide enough for a lot of equipment, or a small crowd, this may be worth a look.