In most parts of the United States, rain is a possibility — or even, in some places, a fact of life — for much of the year, including spring, summer, and fall … or even winter. While there are a number of ways to brave the rain, from ponchos to whatever random object you happen to be holding, the standby for most people is the umbrella.

Now, umbrellas come in various sizes, and they each have their strengths and weaknesses. On one end, you have the mighty golf umbrella, which is large enough for a small crew (or a golfer and his or her gear) and is vented so that the user won’t get pulled away by the wind, Mary Poppins style. The downside to this umbrella is that it is wide and heavy, making it a poor choice if you need to stow it in a small space or if you’re in a particularly large crowd. Aldi sometimes sells such an umbrella, in the Crane Large Vented Golf Umbrella.

At the other end of the spectrum is the compact umbrella. It’s small and lightweight, so you can fit it in a small bag, and it’s always at the ready if you need it, and it’s a lot less likely to hit a fellow traveler if you’re out and about. The downside to this umbrella is that it’s good for one person and not much else, and it likely isn’t built to withstand high winds the way a larger umbrella is.

Nevertheless, I think there are benefits to keeping a compact umbrella close at hand. And Aldi sometimes sells one of those, too. 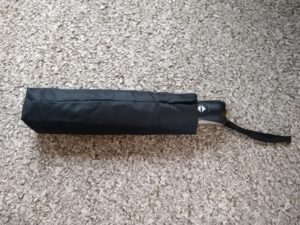 The Skylite Automatic Umbrella is an ALDI Find, meaning it’s only in stores for a short time. At the time of this post, it cost $6.99, which was the same price this umbrella was the year before. Skylite is one of those names that might almost make you think it’s a name brand, but it’s not … it’s an Aldi private label, one used for a few varieties of travel gear, including suitcases and travel pillows.

The Skylite umbrella comes in various colors, although I opted for a simple, classic black. The umbrella comes with the umbrella itself and a fabric slip case that you can store it in if desired. When fully closed and packed, it measures about 11 1/2 inches long and about 2 1/2 inches in diameter, which made it small enough to fit in one of the small side pockets of my Adventuridge Premier Backpack. When opened, the canopy is about 37 inches wide, or roughly 3 feet. There are smaller versions out there, but this one is still pretty small.

One thing the umbrella does not come with is any sort of support services or warranty, although I wouldn’t expect it to. In my experience, small umbrellas, regardless of brand, don’t usually last as long as bigger ones.

Using the umbrella is pretty simple. Once you’ve taken it out of the slip case and removed the Velcro strap, the button on the bottom extends the umbrella to its full height. To put it away, you hit that same button, which releases the umbrella, allowing you to push the umbrella down into the packed position, where it will click when done. I can report that I was able to get the umbrella back in the slip case, something I can’t always easily do.

One small note: I found that if I hit the button after releasing the umbrella from its open position, I had to push it back to its fully closed position to reopen it. In other words, I couldn’t just manually push the umbrella back to the open position.

By timing, it rained pretty hard the day I sat down to review this umbrella, so I was able to take it out in the rain. It worked about like I expected it to — it offered decent, if not totally complete, protection from the rain. As a compact umbrella, parts of me still got a few drops, but it did the job as advertised.

If you need a big umbrella, this Skylite Automatic Umbrella is probably not going to cut it. (A Crane golf umbrella might.) But if you need a small, compact umbrella for those times when you need some protection from an unexpected bout of rain, this should fit the bill.