In 1963, an entrepreneur and inventor named Ronald M. Kasperzak founded a kitchen cookware and accessories company called Commercial Aluminum Cookware. The company initially marketed to restaurants and professional food services, aiming to provide more high-end products for people who worked with food for a living.

Five years later, Kasperzak invented and marketed a process known as hard-anodized aluminum. It was a process derived from the aerospace industry, designed to make cookware more durable, including making it more resistant to corrosion and warping. Kasperzak called his new product Calphalon.

In 1992, the company renamed itself after the product, and today Calphalon is synonymous with high-quality, durable cookware. I’ve owned a couple of Calphalon skillets over the years and they are as advertised: sturdy, long-lasting, and good at distributing heat. In other words, they’re great at what they do.

Aldi sells cookware throughout the year, from budget skillets to cast iron Dutch ovens. One recurring piece of cookware is this item: a hard-anodized nonstick skillet. 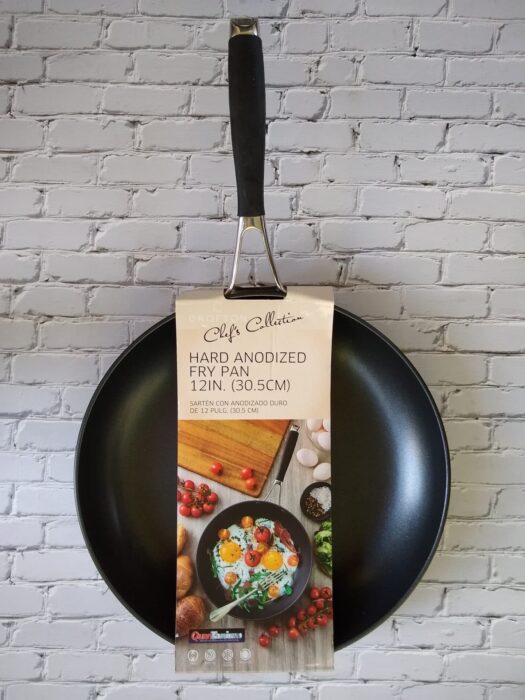 The Crofton Chef’s Collection Hard Anodized Fry Pan (Product Code: 804952) is an Aldi Find, which means it can only be found in stores for a limited time. Once it’s gone, it’s gone, which means you can’t order it online. At the time of this post, the skillet runs $19.99. I couldn’t easily find any other hard-anodized skillets at that price, so overall this looks to be a pretty good deal.

The packaging says that the skillet is made in China. The skillet is backed by a two-year warranty, serviced by Protel (Hegele Logistic), a frequent Aldi warranty provider. 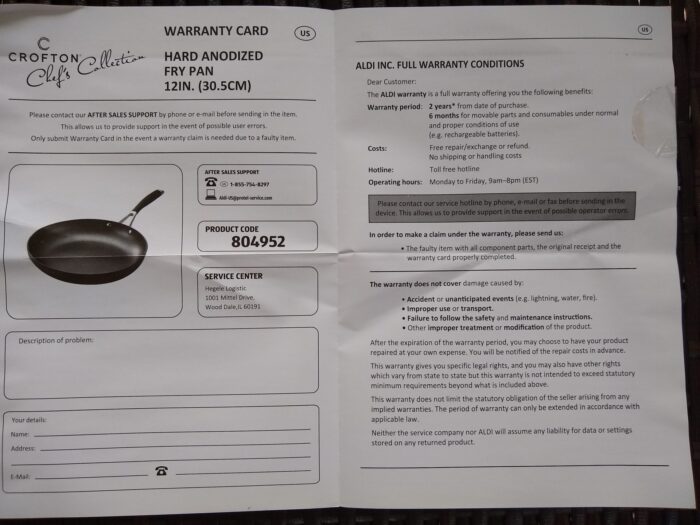 The skillet is 12 inches in diameter, which is typically classified as a large skillet or extra-large skillet. That makes this a good size for someone who is cooking family-sized meals. The skillet is composed of a double-riveted stainless-steel soft grip handle, a hard-anodized skillet, and a nonstick coating.

The nonstick coating consists of Quantanium, a common nonstick chemical. It functions much like Teflon, although, unlike Teflon, it is not made using PFOA. PFOA is a chemical used in the application of Teflon, and although it burns off in the process, some consumers worry about residual amounts. That is not a consideration with Quantanium. 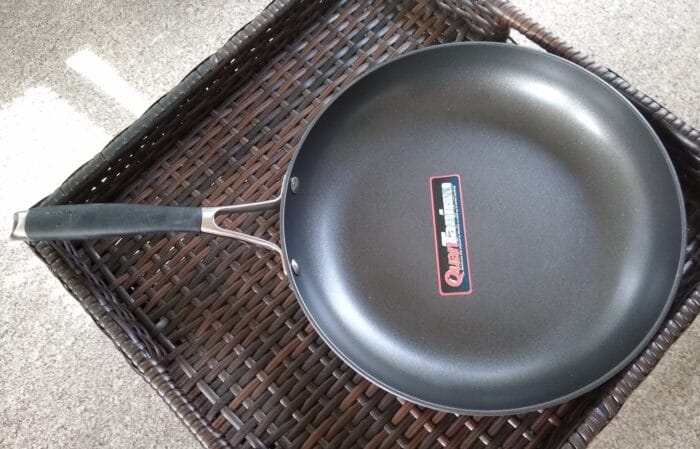 There are a handful of recommendations and warnings in the packaging. This skillet, for example, should be washed by hand with warm soapy water rather than put in the dishwasher. Users should also avoid using metal utensils on the nonstick surface when possible. This skillet should be heated gradually rather than placed on a pre-heated burner.

Our initial tests of this skillet were positive. We first used it to make Big Mac sloppy joes with all-Aldi ingredients. It heats evenly, has a quality nonstick coating, and it is simple to both cook with and to clean up afterward. It is a heavier skillet than some, so if you don’t have a lot of arm strength you might hold it for a moment in the store to be sure you’re fine with the weight. My Calphalon skillets were all heavier, so I find that weight to be a positive sign of build quality.

The Crofton Chef’s Collection Hard Anodized Skillet looks the part of a quality skillet. It feels like a substantial skillet, and its 12-inch diameter and nonstick coating make it an attractive option for family cookware. Time will tell how long it lasts, but it certainly feels like something that should stick around for a while. The two-year warranty adds some extra peace of mind.