A few years ago, my children attended school with children from a family that operates a local restaurant specializing in Middle Eastern and Mediterranean food. They serve delicious shawarma, and when I was invited to the family’s home, or when we all attended gatherings or school events where food was involved, I was often treated to foods such as baklava, tabbouleh, and hummus. One of my favorite foods was the falafel.

Generally made from ground chickpeas or fava beans and deep fried, falafel tastes good on its own as a snack, or it can be served sandwich-style in pitas or flatbread. It’s often topped with various veggies and tahini-based sauce.

Aldi sometimes sell falafel under its Earth Grown private label product line, which encompasses mostly vegan foods. I picked up a few boxes when I found falafel in stores recently. 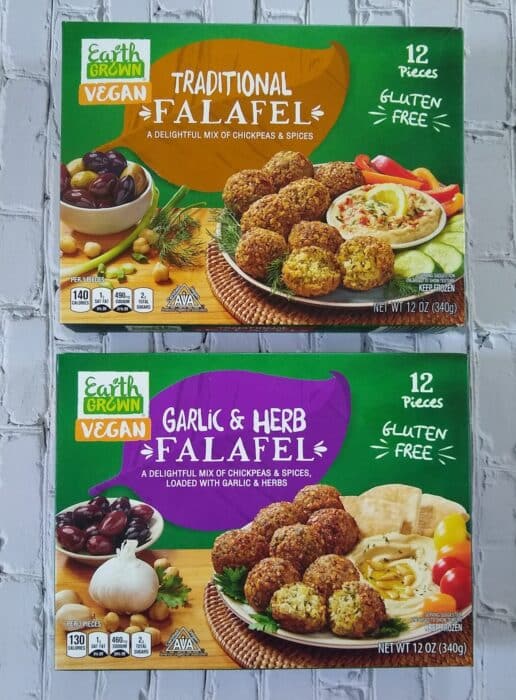 Earth Grown Vegan Falafel cost $3.99 for a 12-ounce package at the time of publication. It comes in two varieties: Traditional or Garlic & Herb. I bought a box of each. You’ll find these in the Aldi Find freezer aisle.

These are Aldi Finds, which means they’re only in stores for a short time. Each store gets one shipment, and after it sells out, it’s gone unless Aldi decides to bring it back in the future. Aldi does not offer online ordering for products that are not in stock at your local store.

This falafel is gluten free and is certified vegan through the American Vegetarian Association.

These should be kept frozen until ready to bake. The boxes have directions for baking these in a conventional oven. Preheat the oven to 400 degrees Fahrenheit. Remove all plastic packaging and place the falafel half an inch apart on a parchment-lined baking sheet. Bake for 10-15 minutes on the center rack in the oven until thoroughly heated to an internal temperature of 165 degrees. Let stand a few minutes before serving.

I opted to bake some of these in my oven and some in my air fryer. For the air fryer, I heated it to 400 degrees and cooked for about 10-11 minutes. They came out of the air fryer nicely crisp on the outside. The falafel I baked in the oven was fine, but slightly less crispy on the outside. In the future, I will probably air fry these.

I served the falafel atop some mini naan from Aldi along with diced tomatoes, cucumber, and onions. I drizzled it all with Aldi tzatziki salad dressing (because I didn’t have any tahini sauce). My family also enjoyed eating these falafel balls on their own without all the sandwich fixings. 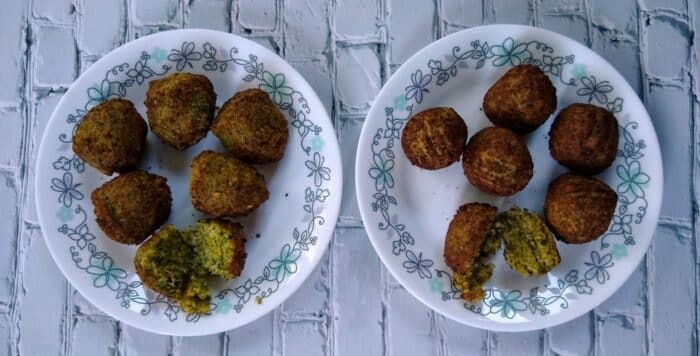 Traditional on the left, Garlic & Herb on the right.

Both the Traditional and the Garlic & Herb falafel have a slight amount of spicy kick to them, most likely because red pepper flakes are listed among the ingredients. When served sandwich-style with some type of flatbread, veggies, and sauce, I don’t notice the spice. However, when I ate these on their own, they are mildly spicy.

Both varieties include chickpeas, onion, parsley, dill, green onion, coriander, and cumin. The main difference between the two flavors seems to be that the Garlic & Herb variety has cilantro and garlic, so if you don’t like cilantro, you’ll want to stick with the Traditional flavor. I liked both varieties.

Keep reading for nutrition information about each flavor. 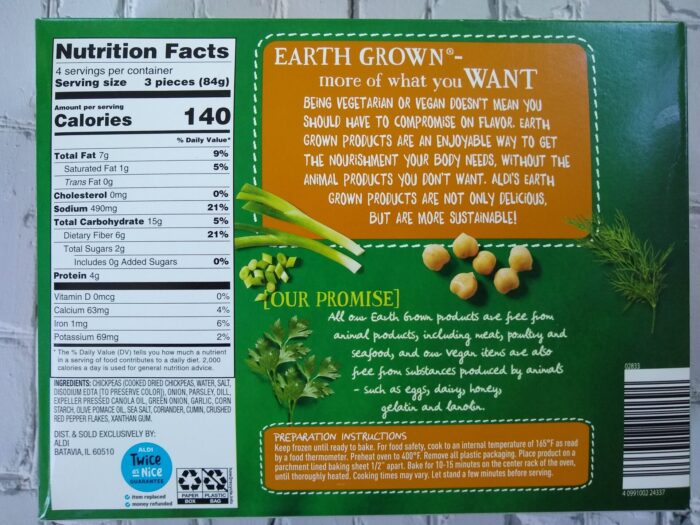 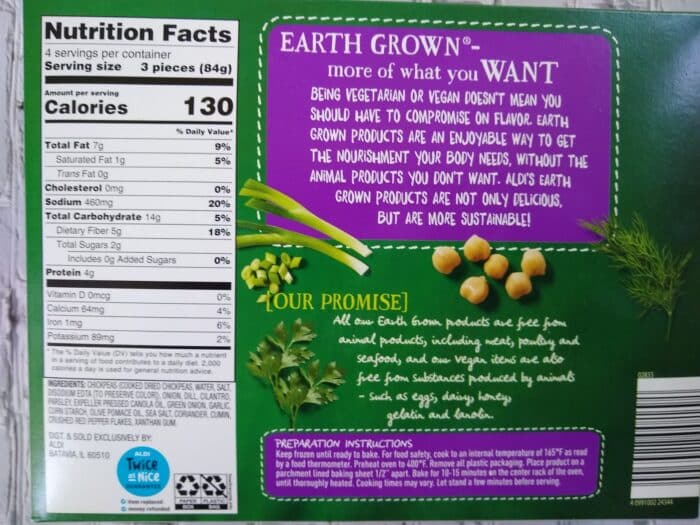 Earth Grown Vegan Traditional Falafel and Earth Grown Vegan Garlic & Herb Falafel feature ground chickpeas and various spices with an outer breading that bakes up slightly crisp. They’re great on their own, served with a dip such as hummus, or served on flatbread or in a pita with veggies and sauce. When we’ve tried falafel from a local restaurant, it has not been spicy, but this Aldi falafel does have a mild spicy flavor. If you like Middle Eastern or Mediterranean food, give these a try.