Depending on your tastes, you may or may not think pizza is something to eat for breakfast. (Some nutritionists think it’s not the worst idea.) Aldi has taken a stab at some interesting breakfast foods before, including a refrigerated take-and-bake breakfast pizza.

This pizza, the Mama Cozzi’s Biscuit Crust Sausage Cheese Breakfast Pizza, isn’t take-and-bake. It’s a frozen pizza, available in the Special Buy (ALDI Find) section of the store. At the time of this post, the 12″ pizza ran $3.99. 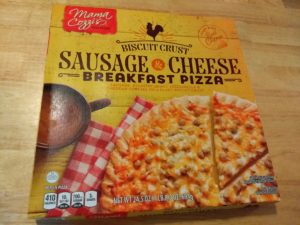 As the name suggests, the pizza uses a biscuit crust. It’s topped with sausage, along with a combination of mozzarella and cheddar cheeses. Instead of tomato sauce, this pizza uses country gravy.

Cooking instructions are the usual. Preheat the oven to 375 degrees, keeping the pizza frozen while preheating. Place the frozen pizza directly on the middle rack. (We used a pizza crisper.) Bake pizza 22-25 minutes or until the cheese in the center is melted and the crust is golden.

The instructions also warn, obviously, not to eat the pizza before baking, and to make sure the pizza reaches an internal temperature of 165 degrees before eating. 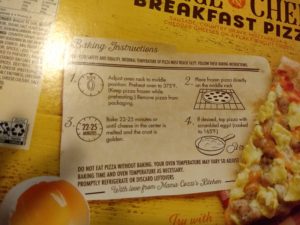 The instructions also add one more suggestion: to top the pizza with scrambled eggs. We took the box up on the offer, whipping up some Goldhen Eggs to top our pie. 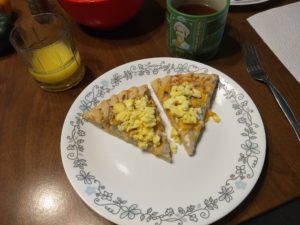 We were impressed. Despite being a frozen pizza, the various components all were solid, from the country gravy down to the sausage and cheese. Also, adding scrambled eggs is a small detail that should not be overlooked — the eggs add a nice additional layer to the taste and make this pizza really good. (It also adds a little more substance, as the pizza isn’t huge.)

A couple of warnings. One, this pizza isn’t a health food. 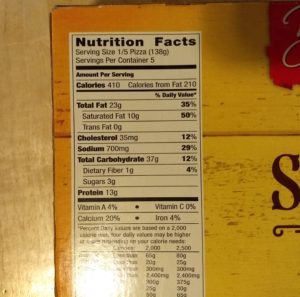 The nutrition information. View at your own risk. (Click to enlarge.)

One slice of pizza — again, this is not a huge pizza — is good for 410 calories, 23 grams of fat, and 700 milligrams of sodium. Put another way, there is enough saturated fat in two servings of pizza to comprise 100% of the recommended amount. We cut the pizza into eight slices (the nutrition information is based on 1/5 of a pizza, but who cuts their pizza into five slices?) and each of us ate two, so, if you’re like us, expect your nutrition information to be a bit higher, as two slices is 1/4 of the pizza. Those two slices, incidentally, didn’t really fill us up, and that was with adding eggs. (None of those nutrition numbers, of course, include the eggs.)

Mama Cozzi’s Biscuit Crust Sausage Cheese Breakfast Pizza is a good-tasting pizza, especially when topped with some scrambled eggs. It’s also really bad for you and, at 12 inches, isn’t very large, either. It’s a fun treat, but it’s also a strictly every-once-in-awhile food … which is probably why it’s good it’s only an ALDI Find.