When I was growing up, I remember sometimes spotting Egg Beaters in the fridge at my house. It was an era when eggs had a bad reputation because the yolks contain cholesterol. Egg Beaters were touted as a *healthy* alternative to traditional eggs. Egg Beaters consist primarily of egg whites along with a few additives, and they come in a pourable carton and, for the most part, can be used just like regular eggs.

Current science indicates eggs may not be the dietary villains we once believed them to be. That’s because the cholesterol in eggs doesn’t actually seem to raise cholesterol levels, and the body’s cholesterol production is stimulated primarily by saturated fat and trans fat in our diets rather than dietary cholesterol. Along with a host of nutrients and vitamins, traditional eggs contain lutein and zeaxanthin, which benefit the eyes, and choline, which benefits the brain and nerves. Studies even indicate eggs may help prevent some strokes and macular degeneration, although there is some speculation that egg consumption may not be good for people with diabetes. But generally speaking, it’s considered safe for healthy people to eat up to seven eggs a week.

If you still prefer to avoid traditional eggs, or if you have specific health conditions that require you to steer clear of eggs, Egg Beaters may be a good way for you to continue to enjoy a popular breakfast food. Egg Beaters can be pricey, though, with a 32-ounce carton at my local regular grocery store costing $6.99 at the time of publication. 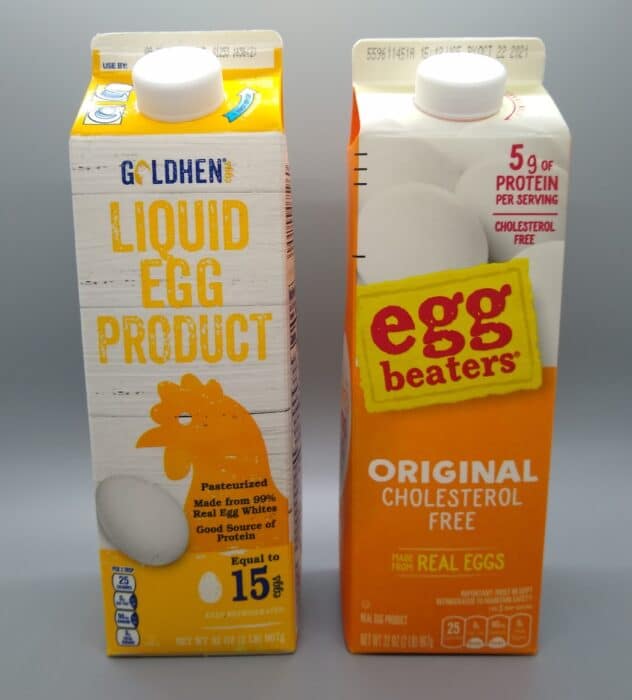 This is where Aldi comes in. The discount grocer sells its own version of knockoff Egg Beaters for less than half the price of name brand. We tried both the Aldi version and Egg Beaters to see how they compare. 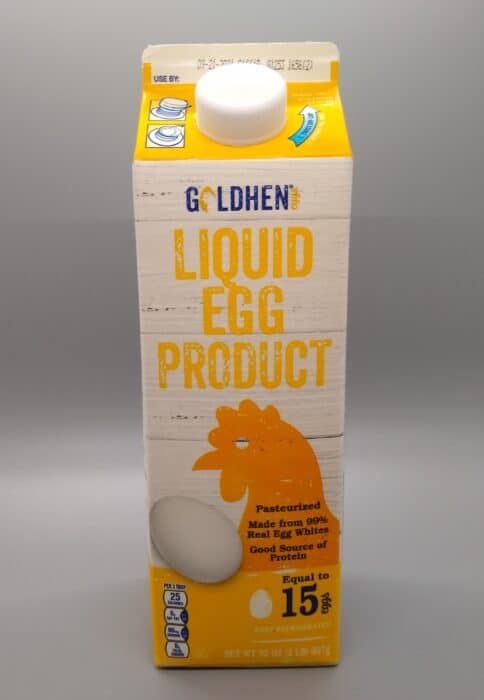 Goldhen Liquid Egg Product costs $2.99 for a 32-ounce carton at the time of publication (about 9 cents per ounce, compared to about 22 cents per ounce for Egg Beaters). This is a Regular Buy, which means Aldi sells it all year. It’s pasteurized, made from 99% real egg whites, and is billed as a good source of protein with 5 grams (10% DV) per 3-tablespoon serving. It’s also gluten free, lactose free, and kosher.

The carton states this product should be kept refrigerated, and the carton contents are equal to 15 regular eggs.

The difference is that the Aldi version also contains salt, onion powder, and natural flavor. However, despite containing salt, the Aldi version has the same amount of sodium as Egg Beaters: 90 mg per 3-tablespoon serving, or 4% of your daily value.

In fact, the nutrition panel is identical between the Aldi product and Egg Beaters. There are about 20 servings per container, and one 3-tablespoon serving has 25 calories, 90 mg of sodium (4% DV), and less than 1 gram of total carbohydrates (0% DV). Neither brand has any fat, cholesterol, or sugar. 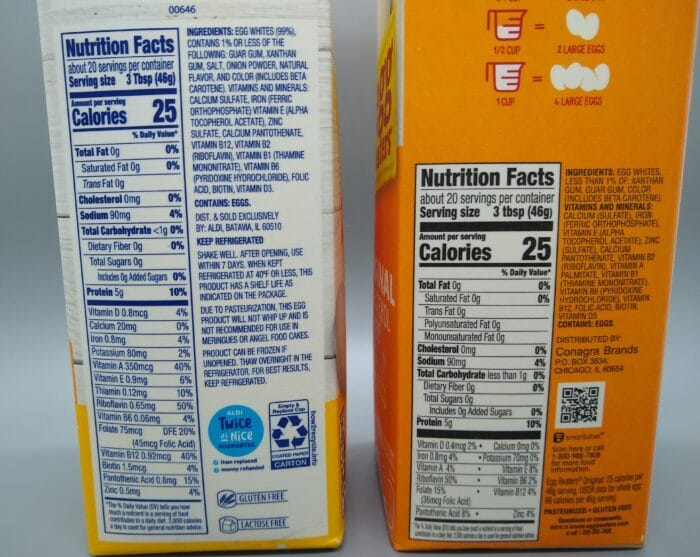 Goldhen Liquid Egg Product on the left, Egg Beaters on the right. (Click to enlarge.)

If you’re put off by processed ingredients such as gums and natural flavors, you probably won’t care for either of these products. The good news is that they comprise a small percentage of the ingredients.

The Goldhen Liquid Egg Product carton I bought had a use-by date of September 9th, 2021, about a month and a half out from the day I purchased it (the Egg Beaters carton I bought was good for about two and a half months from my purchase date). The Goldhen carton says if kept refrigerated at 40 degrees Fahrenheit or below, it has a shelf life as indicated on the package. However, after opening it should be used within seven days. My Egg Beaters carton didn’t say anything about using within seven days after opening, but their website recommends this. The Goldhen product carton says it can be frozen if unopened; thaw overnight in the refrigerator. Yet for best results, it should be kept refrigerated.

When using either one, shake the carton well first. The Goldhen label says that because this product is pasteurized, it will not whip up and is not recommended for use in meringues or angel food cakes. 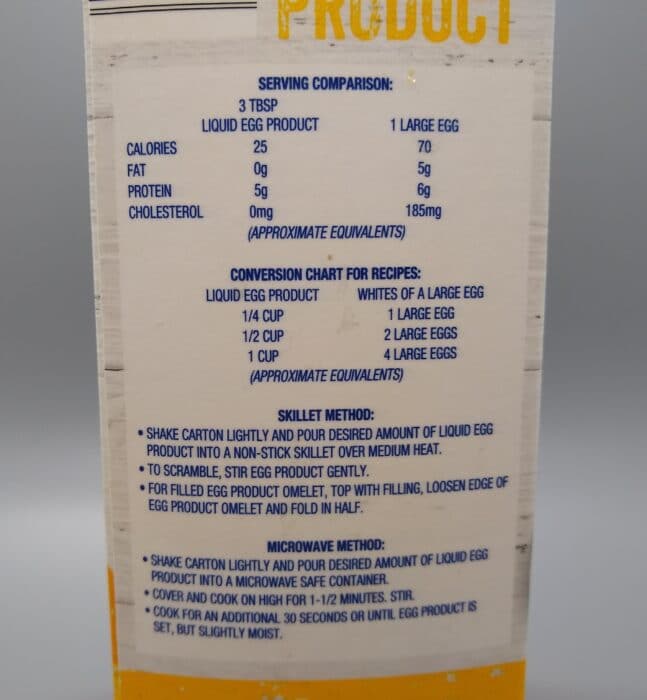 To cook in the microwave, shake the carton lightly and pour the desired amount of liquid egg product into a microwave-safe container. Cover and cook on high for 1 1/2 minutes. Stir. Cook for an additional 30 seconds or until egg product is set but slightly moist.

We prepared both name-brand Egg Beaters and Goldhen Liquid Egg Product in skillets, making them scrambled egg-style with a small amount of butter substitute. Both of them look like regular scrambled eggs and the texture and taste are pretty similar to regular eggs.

I’ll continue to serve traditional whole eggs to my family (I often buy them at my local farmers market during the summer months) for the health benefits and because we don’t have any special dietary needs, but for people who need or prefer yolk-free egg products, the Aldi version is worth a look based on cost.

Goldhen Liquid Egg Product is the Aldi take on name-brand Egg Beaters. These have an edge over Egg Beaters in several ways. First, they cost a fraction of the amount of the name brand. Second, they have more flavor (due to the addition of salt, onion powder, and natural flavor) while having an identical nutritional profile and sodium level compared to Egg Beaters. If you use Egg Beaters, we recommend giving the Aldi version a try.