There was a time when butter was the go-to choice in the kitchen, but in recent decades other substitutes, such as margarine and spreads, have emerged as a healthier alternative to butter. Butter is still usually best for things like baking — and I personally prefer the taste of butter — but when it comes to toast or keeping things from sticking to the skillet, an oil-based spread’s health advantages make it worth a look.

Aldi sells just such a spread. 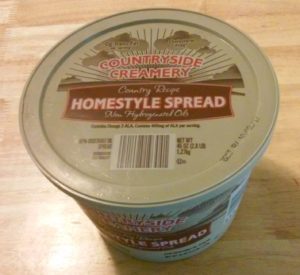 Countryside Creamery Country Recipe Homestyle Spread With Hydrogenated Oils — that’s a mouthful — comes in a couple of different sizes, including the standard large tub. The color and style look suspiciously like the old-style Country Crock Spread tubs, which of course is probably the whole idea (although at the time of this post Country Crock had moved on to a more square design).

Countryside Creamery’s Homestyle Spread is comparable to Country Crock’s Original Spread, although they’re not identical. Both use a combination of oils — soybean, palm, palm kernel — along with water, salt, and various other lesser ingredients that differ slightly between the two products. The Aldi spread is a little less healthy than the Country Crock, with higher calories (60 vs. 50), saturated fat (2g vs. 1.5g), and sodium (110g vs. 100g) per 1-tablespoon serving. The Aldi spread also contains milk (although, curiously, no listed calcium), while Country Crock Original is fortified with Vitamin D to the tune of about 15% of the recommended daily amount.

Taste wise, I was hard-pressed to detect much, if any, of a difference between the two products, and on things like toast it would be even harder to tell. The Country Crock might be a tiny bit softer out of the refrigerator, but again, it’s not significant enough to matter most of the time.

One difference that is detectable is price: the Aldi spread in our area currently runs about $1.80; a nearly identical tub of Country Crock Original runs about $3.50. At just over half the cost of the name brand, the Aldi spread is about as good a value as you could ask for.

If you’re in the market for a spread, Aldi’s Regular Buy Countryside Creamery Homestyle Spread is a great option. It’s a little less healthy than its name-brand counterpart, but it’s also a lot cheaper. Recommended.