A few years ago, I was attending a local festival celebrating all things prairie life. The festival included a concession area selling, among other things, burgers, hot dogs … and bison. I was instantly curious; I’d never had a bison burger before, and wondered how it tasted compared to traditional beef.

I wasn’t the only curious person. The stand sold out of bison burgers before I got my hands on one.

Later on, I was able to try out bison at a local restaurant, and I found it decent, if a bit dry. So when Aldi put bison out as part of a Weekly Fresh Meat Special, I was eager to give it a second try … and to see how Aldi’s version compared to the restaurant version. 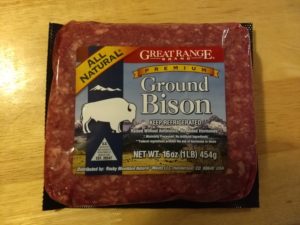 Great Range Premium Ground Bison, an Aldi Special Buy, is not part of any Aldi house brand. Instead, it comes from a company that distributes their bison meat out to various grocers. A one-pound pack retailed at Aldi for $7.99 a pound; we’re not sure how this compares to other grocers, since we’ve never personally seen bison at any supermarkets in our area. We can say that it’s less than we’ve paid for a comparable burger at a local restaurant, although that probably doesn’t come as a surprise to anyone. So if you’re curious about bison, you could do a lot worse than this.

Bison meat — sometimes called buffalo meat* — is a pretty lean meat, with only about 10% fat. One practical result of that is that it can cook faster than many regular beef burgers and can dry out quickly if you’re not careful. (In this way, bison is a bit like grass-fed beef, if you have experience with that.) We recommend that you keep a close eye on your bison meat when cooking it, especially if it’s the first time.

The Great Range packaging doesn’t come with much advice on how to cook the patties, so we did some research ahead of time on how to properly cook the burgers. For our test, we took the one-pound package of meat and formed it into four quarter-pound patties. We then brushed olive oil over the patties on both sides, then preheated the grill to high heat and carefully placed them on the grates.

Our research seemed to suggest that it was going to take about 10 minutes to cook the patties, and that was pretty close to correct. We opted to cook them to 160 degrees internal temperature, one of the few things the packaging suggested. To get there, we grilled them, uncovered, for about 10 minutes, flipping them 5 minutes in for uniform cooking. A couple of our burgers toward the front of our grill needed a bit more time, so we closed the lid and cooked those a couple more minutes to finish the job. In all cases, we kept careful track of the temperature using an instant-read thermometer.

The burgers came out well. I actually liked them better than the one I had previously tried at a restaurant; they were less dry and had more flavor, which may have owed itself to the preparation process. The rest of my family also liked the bison burgers, including some members who are are a little more picky about those things. So all things considered, this was a win.

As far as bison burgers go, Aldi did well. Great Range Premium Ground Bison is quality bison meat that makes for a quality burger. I’m probably still a little partial to beef burgers myself, but if you’re looking to try something different, this is as good a value for bison as you’ll find. Recommended.

* Are bison and buffalo the same? Well, what early American settlers called “buffalo” are what we call bison, but in this the settlers used an inaccurate term that simply stuck. Buffalo are actually a different species found on other continents, so bison is technically the accurate term, which is why you hear people call them “bison burgers” rather than “buffalo burgers.”