Three-wick candles are a cult favorite among Aldi shoppers. Aldi rolls out new scents and varieties frequently throughout the year, in step with the seasons. However, some people don’t like to burn candles out of concern over indoor air quality — because candles can smoke and create soot — or they prefer not to have an open flame burning in their home.

If candles are not your thing but you still want to add fragrance to the air in your home, Aldi also occasionally sells plug-in fragrance warmers and wax melts. After seeing them for years in the weekly Aldi ads, I finally decided to buy a warmer and some melts to try. 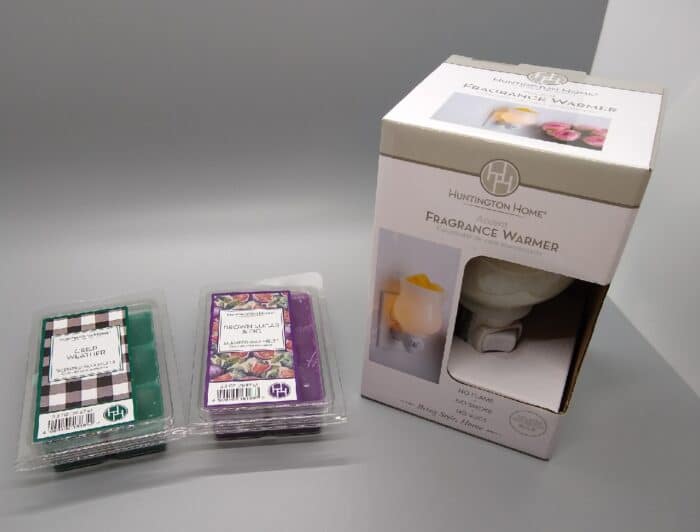 Huntington Home Scented Wax Melts are sold separately and cost $1.69 for a 2.5-oz. package containing six cubes at the time of publication. That’s a pretty competitive price compared to wax melts sold on Amazon, or even at Target or Walmart. 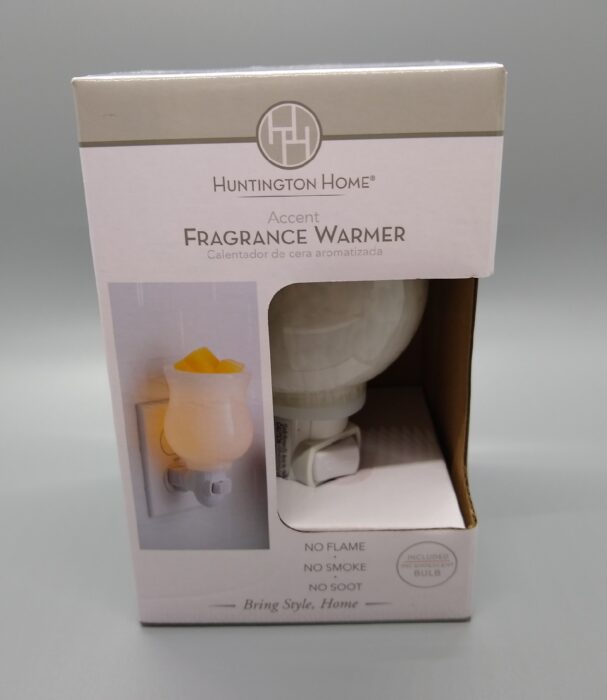 Both the fragrance warmer and the wax melts are Aldi Finds (Special Buys), which means they’re only in stores for a short time. Aldi sells warmers and wax melts throughout the year, so if you miss them, just wait a couple of months and Aldi will probably stock more, although the designs and scents may be different. 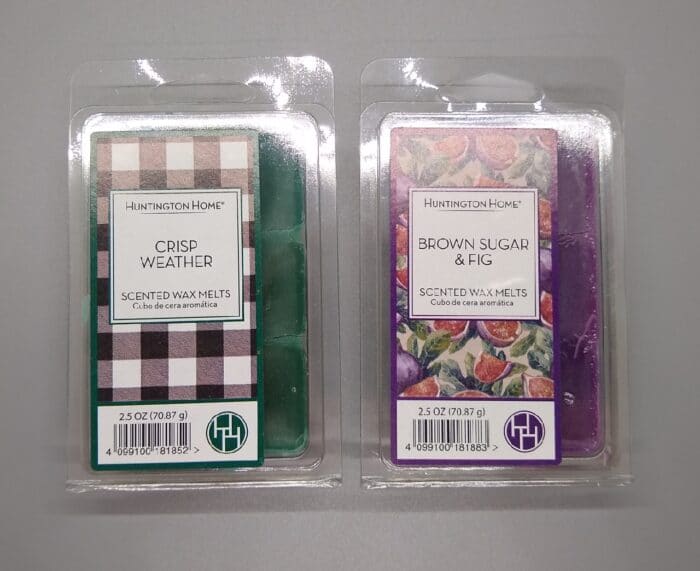 I bought a white accent fragrance warmer, but other options at the time included burnt orange (tortoise) or gray.

The accent fragrance warmer features include:

As mentioned earlier, you’ll have to purchase the wax melts separately from the warmer. As mentioned earlier, the melts are sold in a 2.5-oz. package that contains six small cubes of wax. Scents available at the time when I purchased them included Crisp Weather, Maple Pumpkin, By the Fire, or Brown Sugar & Fig. I bought the Crisp Weather and Brown Sugar & Fig melts. I can buy new wax melts with different scents to use with my warmer when Aldi sells more wax melts in the future, so I can change scents with the seasons.

The wax container says to avoid prolonged contact with skin and eyes, as the wax may cause irritation. The wax may also stain fabric or other surfaces. 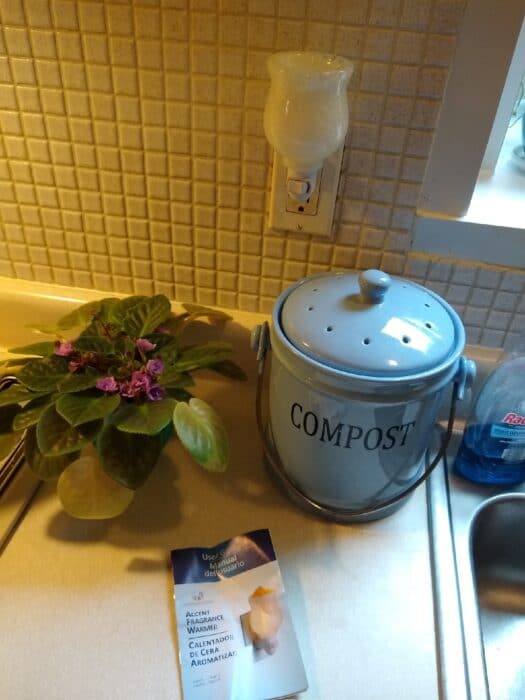 My fragrance warmer plugged into an outlet in my kitchen, with the instruction manual shown.

To use the wax warmer, the box states to plug the warmer into an outlet, add wax, and turn on. 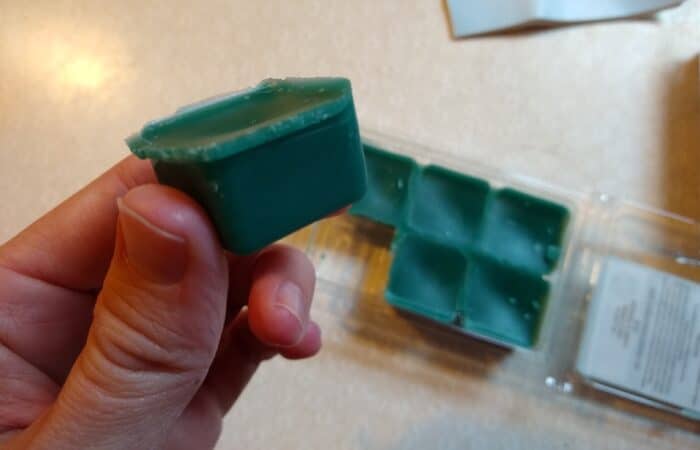 One of the wax melt cubes.

When you want to remove the wax, turn off the warmer and allow it to cool. Then turn the warmer on for just two to three minutes and slip the wax out. To clean the warmer, wipe it with a clean, dry cloth. 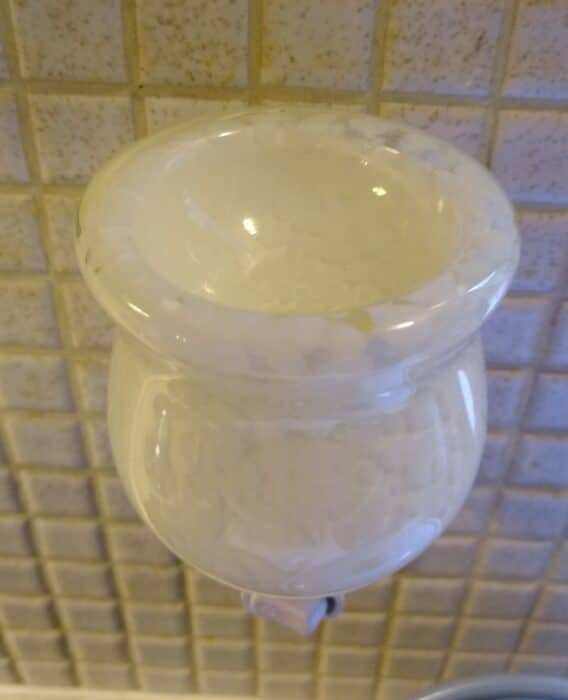 The warmer minus a wax cube.

Among other things, the instruction manual states to only use scented wax that is designed to be used with an electric warmer, and do not warm fragrance oils in the device. Also, always allow the warmer to cool before touching it or moving it. 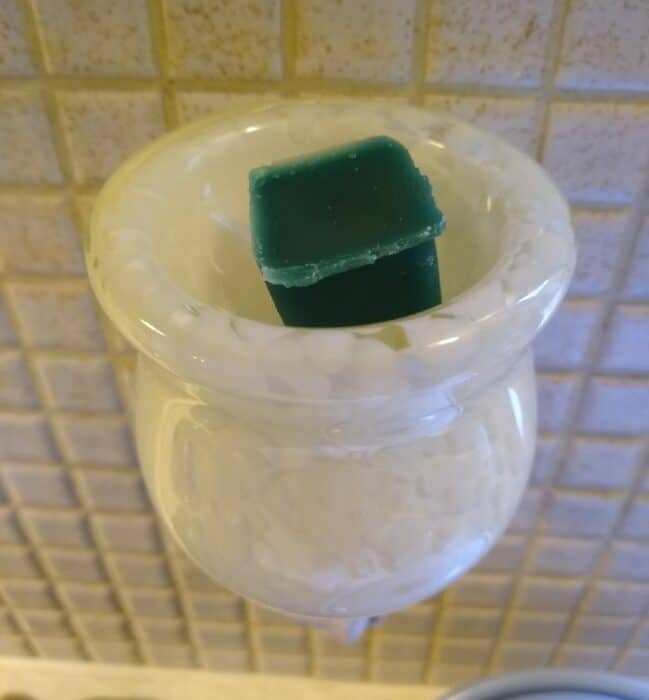 The warmer with a wax cube.

When you need to replace the warming bulb, the manual says to use an NP7 incandescent replacement bulb (15 w). 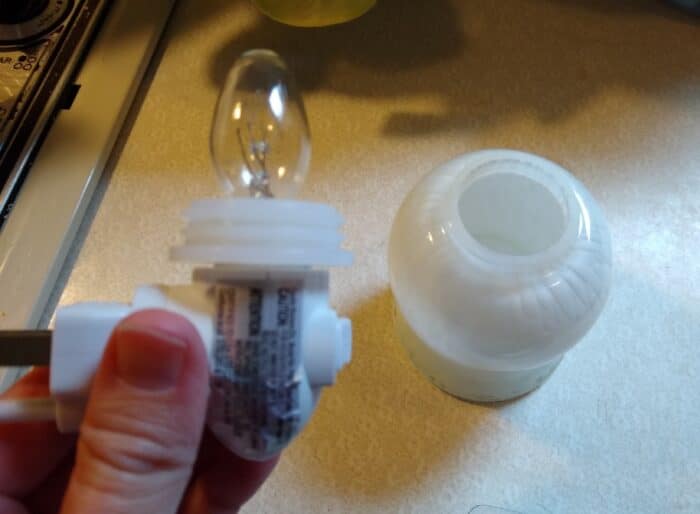 What the warmer looks like disassembled, with the included incandescent bulb.

While fragrance warmers have an advantage over candles because they don’t use an open flame or create smoke and soot, you’ll still want to be careful because the warmers do use heat. The warmer box states  to plug it only into an exposed wall outlet where it is ventilated and cannot contact bed coverings or other materials that might present a fire hazard. It’s also recommended to not use the warmer with extension cords. 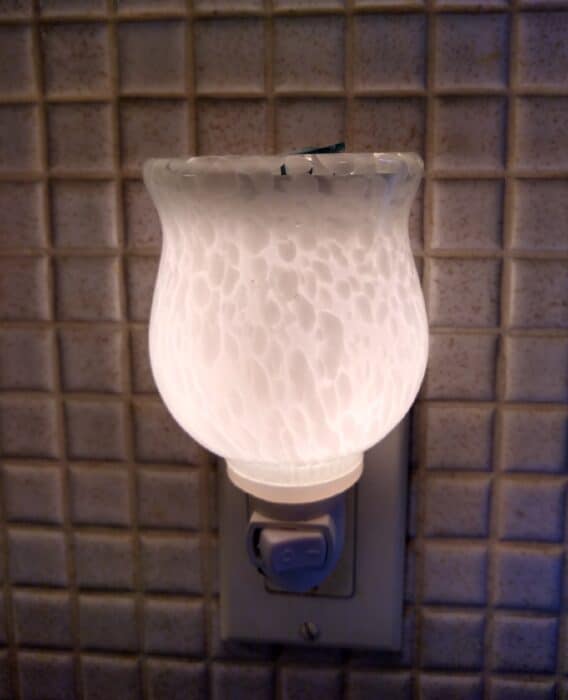 The warmer plugged in and turned on, with the light on.

Just because there is no flame and the wax isn’t burning off into the air in your home does not mean the ingredients in these melts won’t bother people with allergies or asthma either, so that’s something to be aware of.

I like the look of my fragrance warmer from Aldi, and it is easy to use. It took just over three hours for one wax cube to melt completely in the warmer, but of course we could smell it almost immediately after turning on the warmer. The soft glow from the bulb makes it a good nightlight as well. 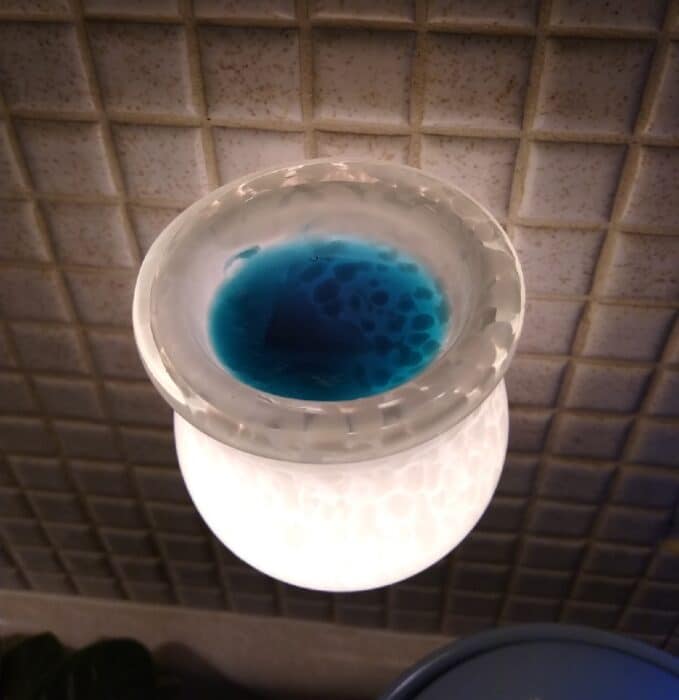 The warmer with a melted wax cube.

I don’t like the scents of the wax melts I purchased as much as I hoped — and that’s just a matter of personal preference — but I’m anticipating that as we approach the winter holidays Aldi will offer a few other scents that I’ll like better. I also think wax melt packs purchased at other retailers would probably work in this warmer.

Stay tuned for updates as I continue to use the fragrance warmer.

The Huntington Home Fragrance Warmer and Huntington Home Scented Wax Melts come in several designs and scents and are competitively priced. If you’re looking for a way to add some scent to your home without lighting any candles, these are worth trying.