When it comes to chicken, Aldi has plenty. On the raw side, Aldi sells everything from whole chickens to drumsticks to chicken cordon bleu. If pre-cooked is your flavor, Aldi sells chicken tenders, chicken patties, and occasionally even chicken fries.

If you sort through the frozen section at Aldi, you might take notice of a small, inconspicuous little red bag of chicken breast fillets. You might also be forgiven for passing them over in favor of, say, chicken patties or chicken fingers. After all, who needs large chicken breast fillets?

Turns out, everyone does. 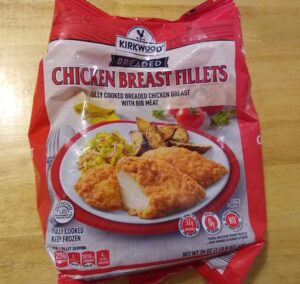 Kirkwood Breaded Chicken Breast Fillets are a Regular Buy, meaning they’re in stores year-round. Keep in mind, though, that they’re pretty popular, so they can sometimes be hard to find. They currently come in a 24-ounce bag that claims to have about 4 fillets. (Ours had 5.) At the time of this post, the bag runs $5.99 total, or about 25 cents an ounce.

There is only one listed way to cook the fillets, and that’s in the oven. Prepare yourself, though, as it’s not a fast process. You first have to preheat the oven to 400 degrees, then cook the fillets for 35-40 minutes, turning them at the 20-minute mark. I was able to cut down the time somewhat by using an air fryer, but be aware that these aren’t a quick-and-easy meal. 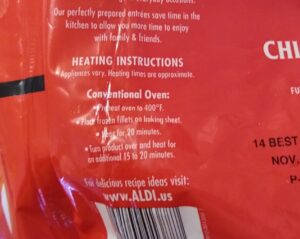 The payoff, though, is that they are excellent. Restaurant quality. They’re crisp, well seasoned, and undeniably tasty. If you have the foresight to put one of these, say, on a toasted brioche bun, you’re going to have something that’s as good as fast food.

Nothing this tasty is going to be all that good for you, and these aren’t. They’ve got some fat, but the real offenders are the sodium and cholesterol. I wouldn’t make a habit out of eating them all the time. Also, since this is a processed food, there’s more than just chicken in here. 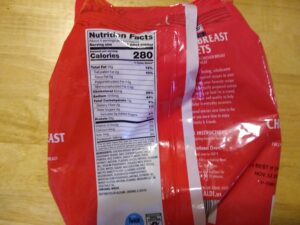 From a taste perspective, Aldi’s red bag chicken, also known as Kirkwood Chicken Breast Fillets, are extraordinary. The flavor is wonderful, they come out crispy, and they make for a dynamite Chik-fil-A impersonation, especially when paired with a brioche bun. The high sodium and cholesterol counts mean you probably shouldn’t have these all the time, but for a sometime treat these are as good as what you’d get from a restaurant. For that reason, they’re sometimes hard to find in stores. Highly recommended, though.