On a recent trip to Aldi, I let each of my sons (12 and 14) pick out something not on our shopping list. My older son selected a loaf of L’Oven Fresh Raisin Cinnamon Swirl Bread. This bread, as well as its close cousin, the L’Oven Fresh Cinnamon Swirl Bread, is an Aldi Regular Buy, meaning that you can pretty much always find it in the store, and it’s covered by the Aldi Twice as Nice Guarantee. I hadn’t tried either bread before, assuming that they would be very high in sugar and unhealthy. I was wrong. 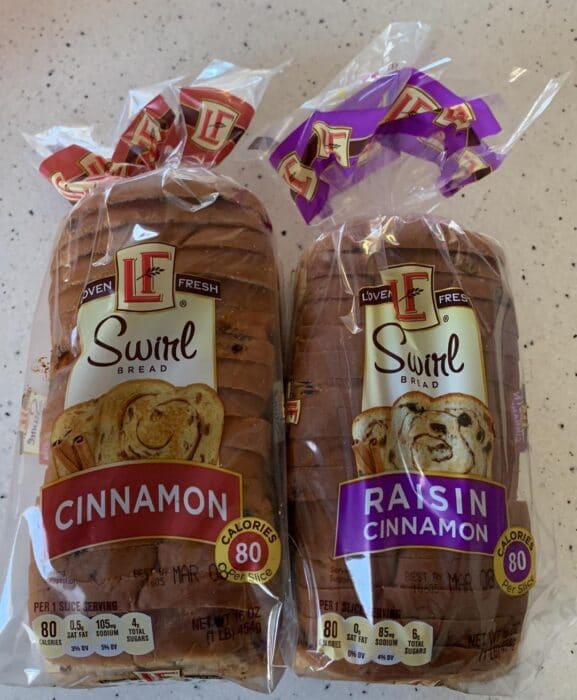 One slice of the L’Oven Fresh Cinnamon Swirl Bread yields 80 calories, 1.5 grams of fat (0.5 grams saturated), 0 mg cholesterol, 105 mg of sodium, 15 grams of carbohydrates, 1 gram of dietary fiber, only 4 grams of sugars (all added), and 2 grams of protein. It has a few trace vitamins and minerals, too. The package warns that it contains milk, soy, and wheat, and it may contain eggs and tree nuts. 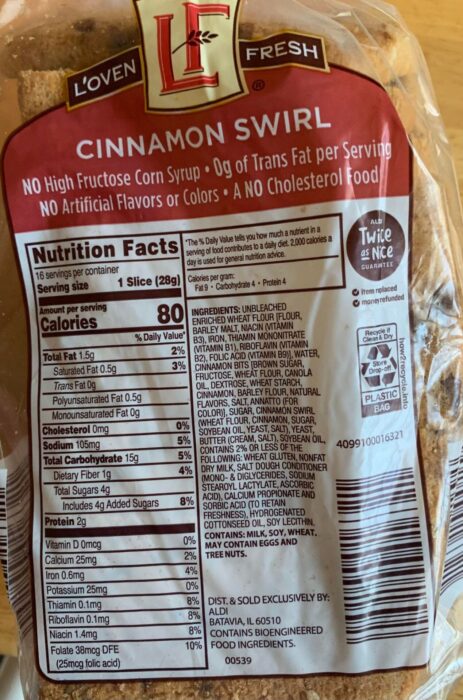 The L’Oven Fresh Raisin Cinnamon Swirl Bread has similar nutritional value but is slightly healthier. One slice also has 80 calories with 1 gram of fat (0 grams saturated), 0 mg cholesterol, 85 mg of sodium, 14 grams of carbohydrates, 1 gram of dietary fiber, 6 grams of sugars (but only 1 gram of added sugar), and 2 grams of protein. It also has a scant amount of vitamins and minerals. This bread also contains milk, soy, and wheat, and it may contain eggs and tree nuts. 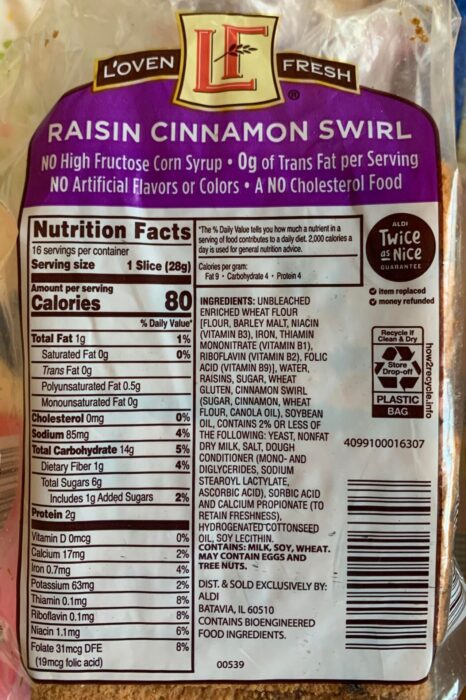 We tried the L’Oven Fresh Raisin Cinnamon Swirl Bread first, and we all liked it. It is slightly sweet with a light cinnamon flavor and a nice amount of juicy raisins. The “swirl” is attractive, reminding me of homemade raisin bread. I tried mine toasted with peanut butter, which I highly recommend for a filling breakfast.

Next we tried the L’Oven Fresh Cinnamon Swirl Bread. Although the slice looks nearly identical to the raisin bread, it has a much stronger cinnamon flavor than its cousin. It tastes like the inside of a cinnamon roll, but less sweet. If you crave cinnamon rolls but are watching your calories/ sugar intake, I recommend this bread as a healthier substitute. 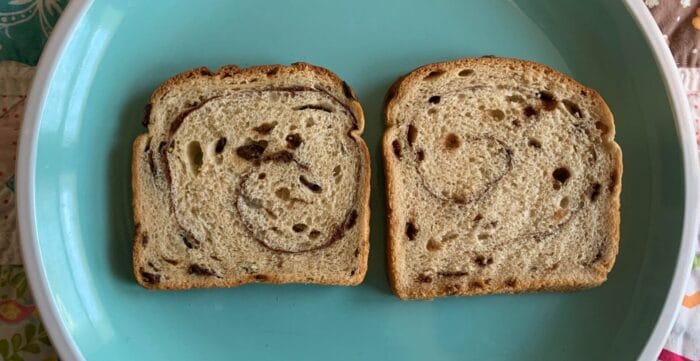 Although my children and I disagreed on which variety was our favorite, we all enjoyed eating both breads as a snack or part of breakfast. They’re not the healthiest variety of bread that Aldi sells, but they still have much less sugar than many of Aldi’s breakfast offerings. The only problem I have with these breads is that we like them so much that one loaf doesn’t last long. I will definitely buy both flavors again soon.