In St. Louis, Missouri, there is a chain of cafe-style fast-casual restaurants that serve a variety of upscale soups, salads, sandwiches, and baked goods. The restaurant is called St. Louis Bread Co., but outside of St. Louis they are known by another name: Panera.

Panini sandwiches can be really good, but they can also cost a bit of money. 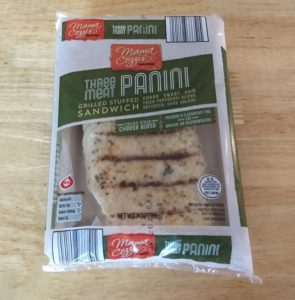 Mama Cozzi’s Three Meat Panini Grilled Stuffed Sandwich, an Aldi Special Buy (ALDI Find), retails for $1.99 for one sandwich. At the time we tried it, it was one of two varieties of panini sandwiches available at Aldi, the other being the Mama Cozzi’s Cuban Style Panini. (We did not try the Cuban Style.) These paninis come one to a packet, weigh 7 ounces, and come with the sandwich and cooking tray. (For the environmentalists out there, the tray is made of paper products and is compostable. The plastic wrap, sadly, clearly lists that it is not recyclable.)

Directions are for either microwave or oven, although in both cases 1) the tray is used and 2) the internal temperature should be 160 degrees. Microwave instructions call for removing the panini from the plastic and microwaving the sandwich on the tray for 60-90 seconds. Oven directions, meanwhile, call for preheating the oven to 375 degrees, then heating the product on the tray in the oven for 15-18 minutes. Be careful, as the sandwich will be hot upon removal.

Both cooking instructions have the obvious tradeoffs: the microwave is faster, while the oven makes the sandwich crispier. We tried both and recommend the oven method if time allows, but the microwave is acceptable if you’re short on time. Also, we placed the sandwich in its included cooking tray on a baking sheet to contain any potential spills or drips, although the instructions do not require this.

The panini is good. The bread is crisp and flaky, the meats are flavorful, and the cheese has good taste and texture. It’s not a huge sandwich, but it’s big enough, especially if paired with a side. It’s not quite as good as a fresh-made sandwich at a cafe, but for being out of the cooler it’s awfully close, and for a lot less money.

All that good taste comes at a steep price, though. 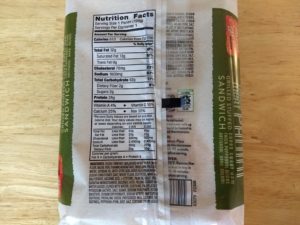 This sandwich is not good for you. And that’s putting it politely: each one has 610 calories, 32 grams of fat (49% of the recommended daily allowance), 70 mg of cholesterol (23%), and 1600 mg of sodium (67%). Of the fat content, 13 grams of it is saturated fat, or 65% of the recommended daily allowance. On the plus side, the sandwich is high in calcium and iron, and it also has some Vitamin A and Vitamin C, but those are pretty poor nutritional consolation prizes. It’s just as well that this is a Special Buy because this is definitely something to eat in moderation.

Mama Cozzi’s Three Meat Panini Grilled Stuffed Sandwich is an excellent-tasting sandwich, top to bottom, and for a lot less than you’d pay to get one at a restaurant. It’s also loaded with calories, fat, cholesterol, and sodium, so it’s best as a once-in-a-while entree.