Aldi sells everything you need to get Thanksgiving or Christmas dinner on the table, and the discount grocery store has what you need to keep food warm once you’ve got it on the table. That includes the Ambiano Buffet Server with Warming Tray. This warming tray has four removable pans or compartments with lids, so you can serve a variety of foods and keep them hot. 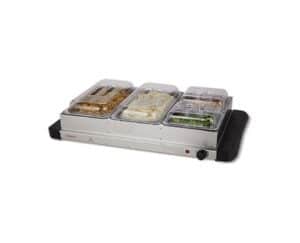 Features for the 2019 model include:

Aldi has sold this buffet server in previous years, but we don’t have any price records. The last time Aldi appears to have sold it was in 2017, and back then it had after-purchase support provided by Protel Service, a German-based company with connections to Hegele Logistic. We also found a manual for the 2016 model here. In previous years, Aldi sold buffet servers under its now discontinued Kitchen Living product line.

We did find a video of an unboxing of the buffet server from 2018, in which a customer opens the box and assembles the server, and he discovers the platform the pans rest in is warped. Hopefully he was able to exchange it, but in any case, the video offers an idea of how big the server is and what kind of space it might take up on a counter or tabletop.

Do you have experience with Aldi’s Ambiano Buffet Server with Warming Tray? Share your thoughts in the comments.