Over the holidays last year, Aldi sold some bacon-wrapped scallops that I served as part of an appetizer-themed Christmas Day dinner. The scallops were so good that when I recently saw Aldi selling other bacon-wrapped seafood — namely, shrimp — I picked up a package to try. 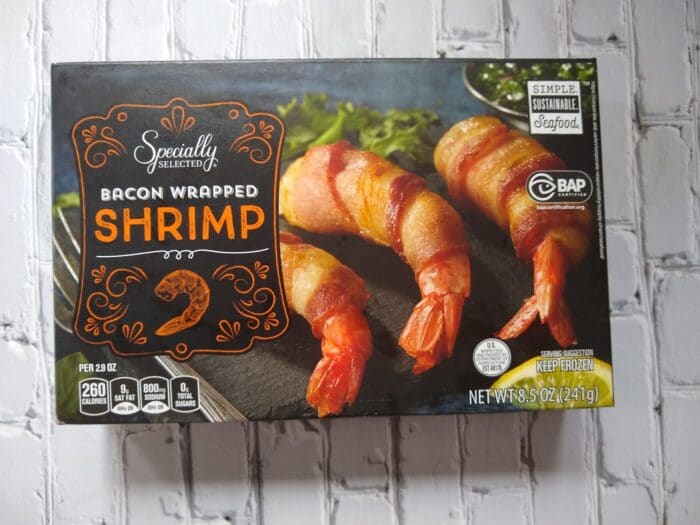 Specially Selected Bacon Wrapped Shrimp cost $6.99 for an 8.5-ounce package at the time of publication. There were six fairly large tail-on shrimp in our package, so that comes out to about $1.17 per shrimp.

These are an Aldi Find, which means they’re only in stores for a short time, and you can’t order them online after they sell out at your local store.

The shrimp were farm raised and are Best Aquaculture Practices Certified, and they were processed in the U.S. 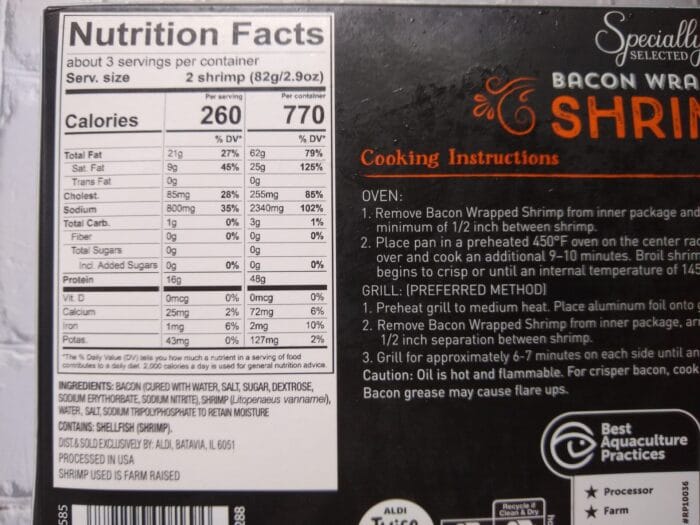 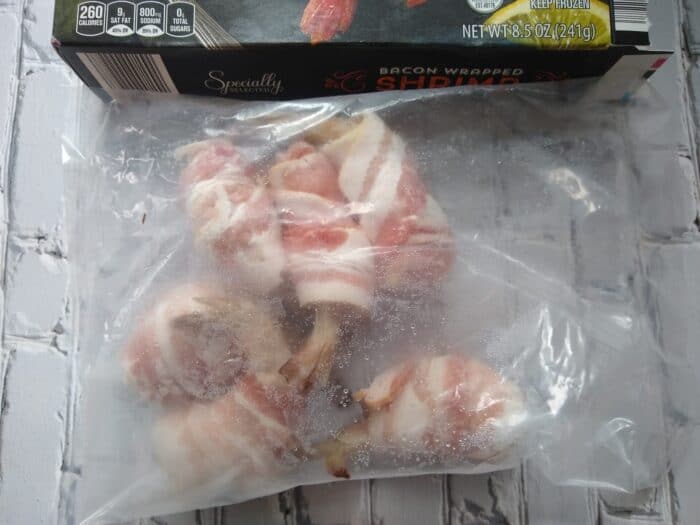 Frozen, uncooked shrimp in the package.

The shrimp can be baked in the oven or grilled, with grilling being the preferred method.

To bake, remove the bacon wrapped shrimp from the inner package and place on a nonstick sheet pan, allowing a minimum of half an inch between shrimp. Place the pan in a preheated 450-degree oven on the center rack and bake for 9-10 minutes. Then turn shrimp over and cook an additional 9-10 minutes until the bacon begins to crisp or until an internal temperature of 145 degrees is reached.

To grill, preheat the grill to medium heat. Place aluminum foil onto the grill’s surface. Remove the bacon wrapped shrimp from the inner package and arranged wrapped shrimp on the foil, allowing half an inch of separation between shrimp. Grill for approximately 6-7 minutes on each side until an internal temperature of 145 degrees is reached. For crisper bacon, cook directly on the grill grates, turning frequently. Be careful because bacon grease may cause flareups. 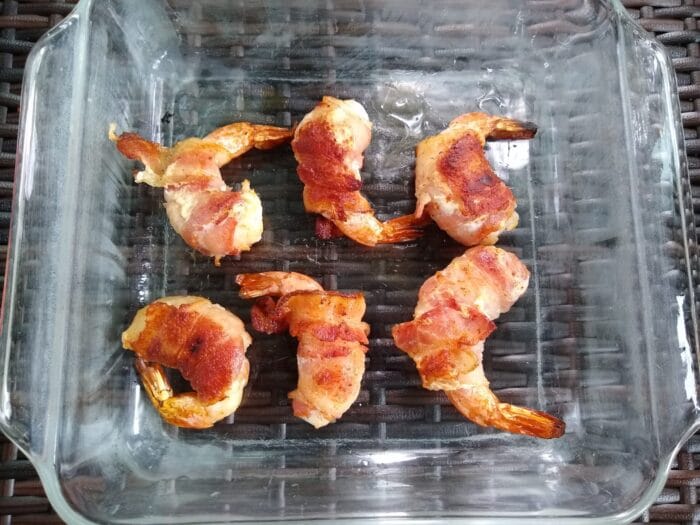 We chose to cook our shrimp on our Aldi Range Master Kettle Charcoal Grill, using charcoal we also purchased from Aldi. It took about 5 minutes longer than the directions indicated to fully cook our shrimp, but they were pretty easy to grill. We didn’t grill them directly on the grate but instead put a layer of heavy duty aluminum foil on the grate and then put the shrimp on top. It meant the bacon didn’t come out quite as crispy, but it was all right.

I served these alongside some butterflied lamb leg and Caesar salad, and everyone in our household liked these. The shrimp were plump and the bacon was flavorful with just the right amount of saltiness. These are a bit greasy, so keep some napkins handy. They are on the pricier side for an everyday meal, but I wouldn’t hesitate to buy these again to serve as appetizers for a special dinner.

Specially Selected Bacon Wrapped Shrimp are excellent when cooked on the grill. The shrimp are decent-sized and the bacon adds lots of delicious salty flavor. If you’re a fan of shrimp and bacon, we recommend these.