In my family, mashed potatoes are pretty much required at any and all holiday functions. My favorite kind of mashed potatoes are the ones where you boil them, blend them up (skins and all), and then season them with unholy amounts of butter and salt, and maybe some garlic, too. More commonly, the family tends to go the fast route with flakes that you combine with water, although those work okay, too.

I don’t mind my mashed potatoes plain, but I will admit that gravy gives them something a little bit extra. It enriches the flavor, and it also can double at giving seasoning to, say, a turkey. And if the turkey is dry, gravy isn’t just optional: it’s crucial to saving the meal.

Making gravy from scratch is ideal, and there are plenty of ways out there to do it. But convenience does matter, and when you’re juggling a host of meats and side dishes you might not have time to concoct your own gravy. There are, fortunately, mixes that can do a competent job whipping up a gravy, and Aldi sells them. 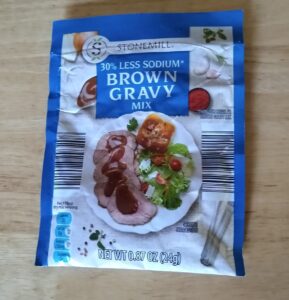 Stonemill Brown Gravy Mix is a Regular Buy, so you can find it in stores any time of the year. It comes in a tidy little .87-ounce non-recyclable pouch and runs, at the time of this post, 29 cents. We’ve seen two varieties of this mix on shelves: regular and low sodium. Our pictures are of the low-sodium version, although we have experience with both, and we’ll talk about both here. More on this in a moment.

Mixing both the regular and low-sodium versions is easy. You start by pouring the powder mix into a saucepan. Then you slowly add 1 cup of cold water, mixing the water into the powder with a whisk. (A fork or spoon would probably also work in a pinch.) Once mixed, you then fire up the stove to medium heat, stirring frequently until the mix comes to a boil. Once that happens, reduce the heat and simmer for 1 minute. The gravy will thicken upon standing.

The packet also points out that you can add 1/4 cup of roasting pan drippings and 3/4 cup water if you want a deluxe gravy. We haven’t tried this ourselves, but it would seem to be a nice way to incorporate drippings from a turkey into the gravy, giving it a richer flavor while also effectively doubling the total amount of gravy.

If you prepare it without drippings, it makes about a cup or so of gravy. This is adequate for, say, four people but you’ll probably want more gravy if you plan to host a crowd.

This gravy tastes good and has a solidly thick consistency. The flavor pairs well with potatoes or meats, just like you would hope it does.

We’ve tried both the regular and lower-sodium versions, and we liked both of them. In fact, we didn’t detect a huge taste difference between the two. We figure a lot of people will want to indulge in the full-sodium version if they’re cooking up a family feast, but we thought the low sodium is perfectly fine. 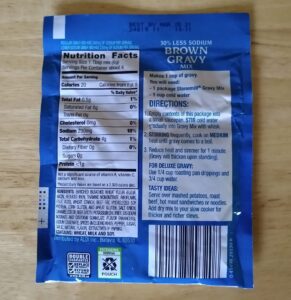 As far as cheap gravy mixes go, this one does a good job, and it adds just the right flavor to a meat-and-potatoes meal. You can even add pan drippings to give it a more homemade feel. Recommended.