I love ice cream. I’ve reviewed several ice creams before, including mini ice cream sandwiches from Aldi and Hold the Cone! mini cones from Trader Joes. Ice cream is one of my favorite foods. I also love the fall because my birthday happens then, and I just like cooler temperatures better than hotter. So when I saw some Sundae Shoppe Pumpkin Spice and Apple Cinnamon ice creams at Aldi recently, I decided they looked worth trying out and reviewing. 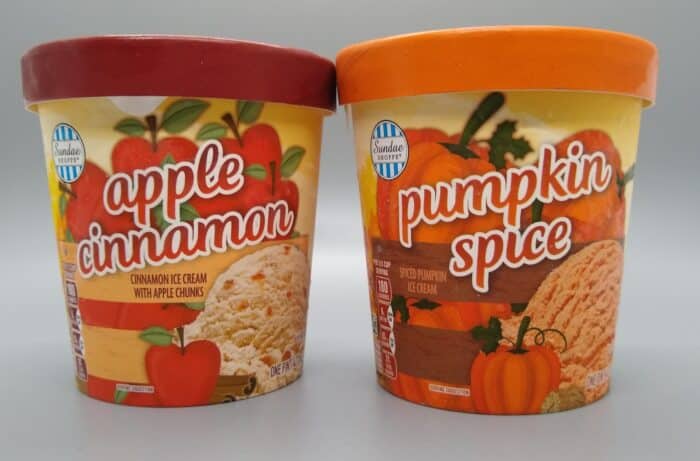 The ice cream comes in two flavors: Pumpkin Spice and Apple Cinnamon. They both come in small one-pint containers that can make about one serving if you’re really hungry for ice cream. These cost $1.99 each at the time I bought them, which is about 50 cents more than what you’d pay for a pint of Great Value store-brand ice cream at Walmart, but it’s cheaper than name-brand pints.

These are Aldi Finds, so you can only get them in stores for a limited time. Each store gets one shipment, and after that sells out, they’re gone until possibly next year. Aldi doesn’t offer online ordering for products that aren’t in stock at your local store.

Sundae Shoppe is not a separate company but instead is a private label Aldi puts on its ice cream and frozen dessert products. 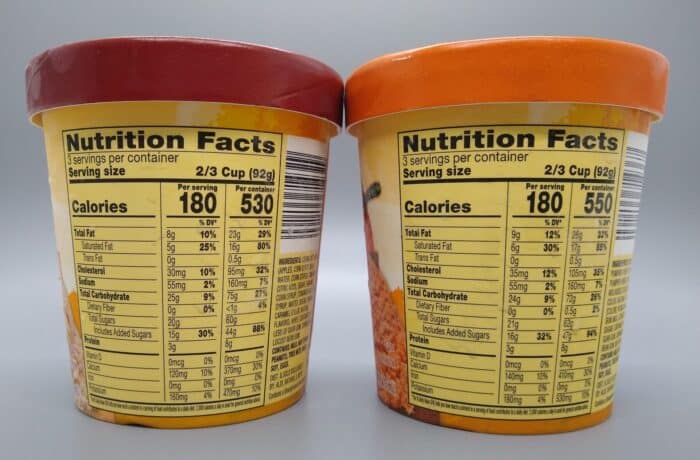 They both contain milk and may contain peanuts, tree nuts, wheat, soy, and eggs.

The first ingredient for both flavors is cream, and the apple cinnamon flavor contains real diced apples, while the pumpkin spice flavor has pumpkin puree. These do contain some more processed ingredients including natural flavor, guar gum, and carrageenan, which are common in many flavored grocery store ice creams. 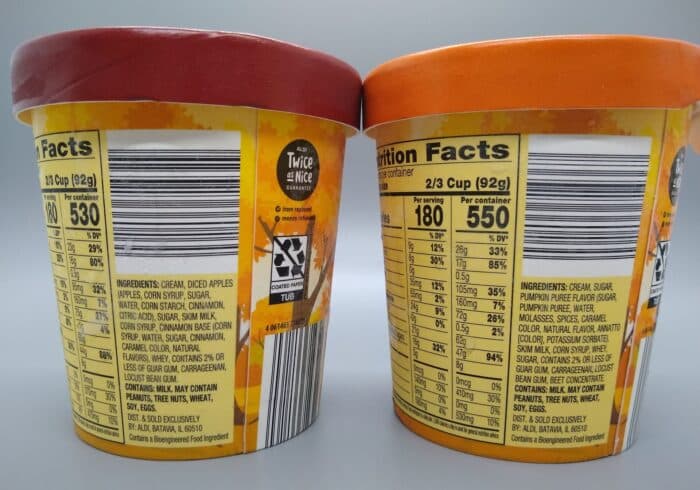 One thing of note is that when we bought this ice cream, we put it in a freezer and left it there for a full day before taking it out and scooping it, so it had plenty of time to harden up after its trip home from the grocery store. However, when we got it out to eat, it was easy to scoop and very soft. When we ate it, it was already melting quickly. We’ve guessed that it has a lot of air whipped into it, which is common with many inexpensive ice creams.

However, if you’re like me and prefer soft, soupy ice cream, this isn’t a big deal, and it saves the time it takes to scoop hard ice cream, which can be difficult to do.

These ice creams are pretty good, in my opinion. The apple cinnamon has real bits of apple in it that aren’t tiny like some foods, and if you look around in the ice cream you can find the small apple chunks. We thought the apple cinnamon ice cream tasted a bit like apple pie a la mode. The pumpkin spice ice cream tastes like pumpkin pie or pumpkin bread. These are a great seasonal snack and I recommend them if you’re looking for an autumn food that’s small and tasty.