Ice cream is one of the most popular deserts that I can think of. There are a lot of flavors, and with so many options, it’s no surprise people love it. Whether it’s an ice cream cone or a sandwich, people love it everywhere.

Ice cream can be bought at a lot of places. It’s sold at gas stations, restaurants, and, of course, grocery stores. Aldi is one of those stores. It sells ice cream in containers, ice cream bars, and ice cream sandwiches. Like these: 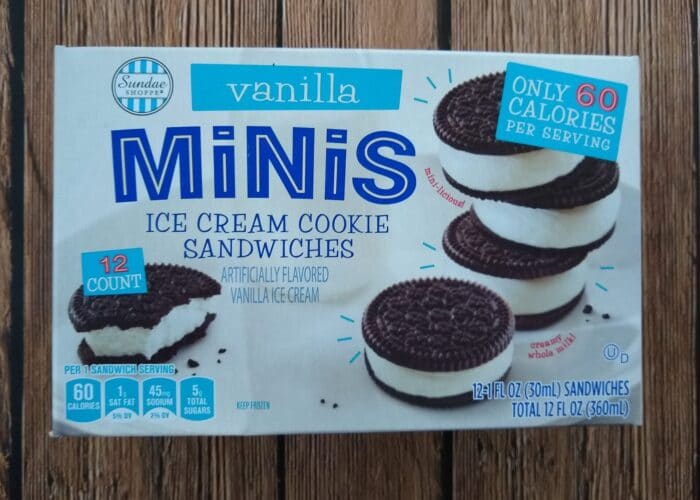 Sundae Shoppe Vanilla Minis Ice Cream Cookie Sandwiches are an Aldi Regular Buy. That means you can find them in stores all the time. They cost $4.29 for a 12-ounce box that contains twelve individual sandwiches. That comes out to about 36 cents per sandwich.

I’ve reviewed one other ice cream product from Aldi so far, Sundae Shoppe Ice Cream Bars, and they cost $3.99. Though the price difference is small, the ice cream bars cost less and you get bigger bars compared to these little ice cream sandwiches.

The ice cream sandwich cookies have 60 calories per one-cookie serving. Each cookie also has 2 grams of total fat, 1 gram of saturated fat, 9 grams of total carbohydrates, and 5 grams of added sugars. They contain milk, soy, and wheat, and they may contain peanuts, tree nuts, and eggs.

They’re very small, as advertised. They remind me a lot of Oreos, because they’re basically Oreos with ice cream instead of frosting in the middle. They’re about as big as Oreos, too. These wouldn’t be very good if you had a large group of people over for a gathering, unless you were willing to buy a couple of boxes of them, which could easily get a bit pricey. 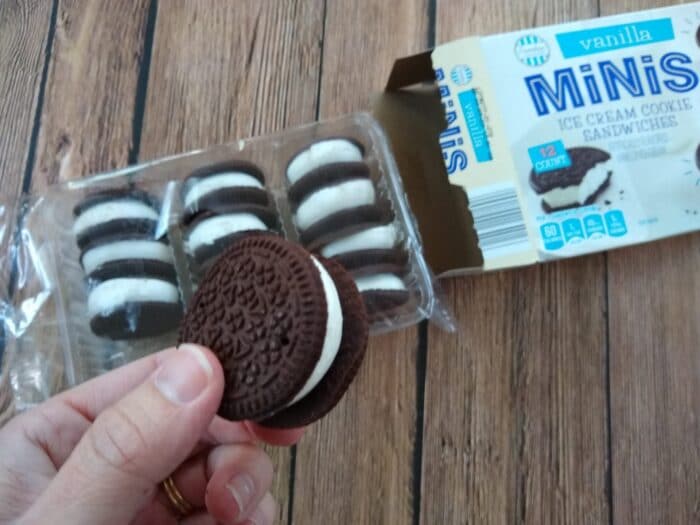 Also, it would be nice if they made ones with chocolate and strawberry ice cream on the inside, too, but as far as I know, it’s just vanilla.

Despite the size and lack of variety, though, I generally liked the cookies. I don’t always like chocolate and vanilla together, and I like Aldi ice cream bars better than these, because I feel like they have more flavor than the cookies. I like these enough, however, that I would buy these again.

I think Aldi could’ve put more ice cream sandwiches in the box because these are small, but they’d be worth buying again. If you’re just doing something small, like celebrating a birthday with a small, quiet gathering, then these would be very good. They’re also nice if you want a small treat that’s not high in calories.