Aldi can be a bit like a mini international grocery store with foods inspired from different countries. They sell various types of Indian food, and sometimes Mexican food or Thai-inspired food, or even Greek food. And of course, twice a year, Aldi sells a wide range of German foods.

The discount grocery store also has an Italian week every once in a while, when they sell limited-edition pastas, sauces, pastries, and more that are from Italy or inspired by Italy. Occasionally, some of these products that are originally sold as limited-time specials get brought on board as products that are sold year round at Aldi. This usually happens with items that are very popular among customers.

One instance where we’ve seen a limited-time product eventually get stocked full time at Aldi is with gelato. Several years ago, we reviewed a couple of gelato flavors that were Aldi Finds. A while back, we noticed that Aldi now sells certain flavors of gelato all year. (In addition, they still sell some unique seasonal gelato flavors as Aldi Finds during the winter months.) 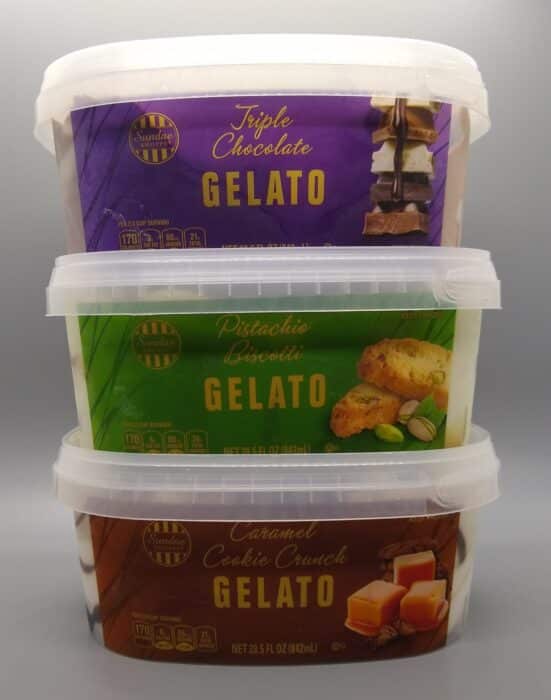 Sundae Shoppe Gelato cost $4.29 for a 28.5-ounce container at the time of publication. That comes out to about 15 cents per ounce. This is 40 cents more per container than what it sold for when we last wrote about Aldi gelato in 2019. Still, a 16-ounce pint of Talenti brand gelato from Walmart cost 34 cents per ounce at the time of publication, so the Aldi gelato remains the better deal unless you can find larger containers somewhere that might possibly have a lower price per ounce.

This Aldi gelato is a Regular Buy, which means that, as mentioned above, you should now be able to find it at Aldi all year.

While gelato has its origins in Italy, this Aldi gelato is not a product of Italy. It’s most likely a product of the United States.

Gelato is an Italian frozen dessert that’s become popular in the United States. It looks and tastes a lot like traditional ice cream. I’ve had it a few times from grocery stores, restaurants, and dessert shops, and it does have some differences from its cousin, ice cream.

Here are a few key distinctions between gelato and ice cream, according to the Food Network.

Gelato has a softer consistency compared to ice cream, and it is traditionally scooped into individual servings using a device that looks like a spade rather than using a standard ice cream scooper. You can use whatever you need to get this gelato into your bowl or cone, though.

Keep reading for more information about each gelato flavor at Aldi. 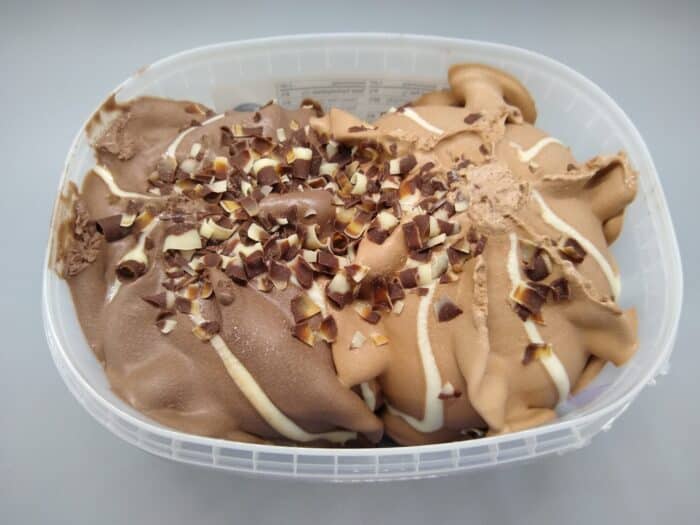 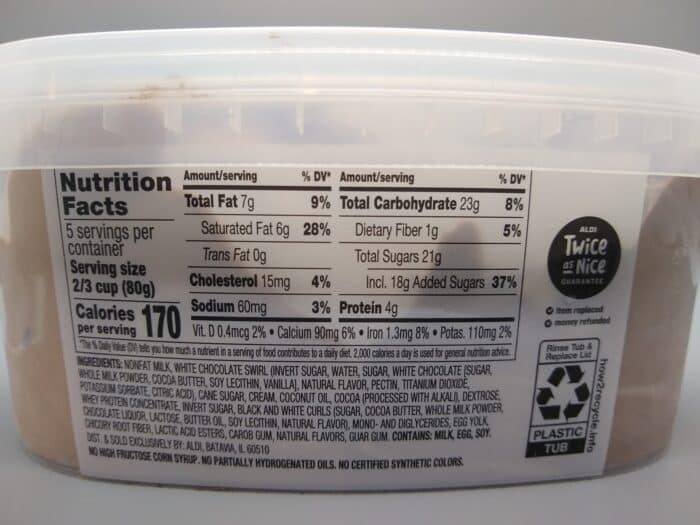 If allergens are a concern, this flavor contains milk, egg, and soy. 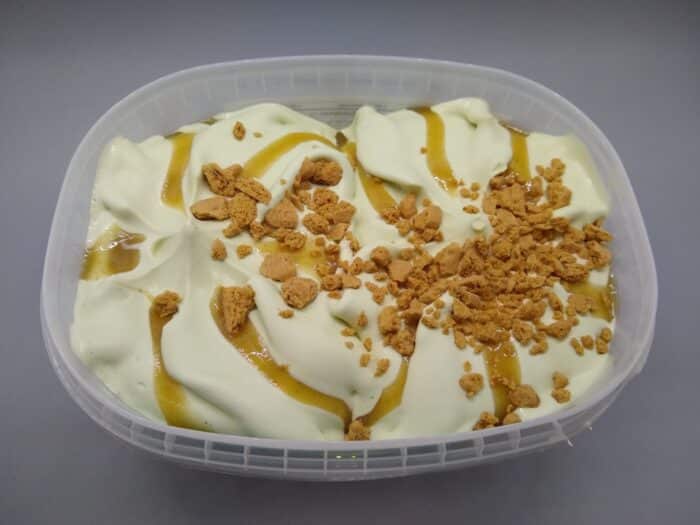 This Pistachio Biscotti gelato features pistachio-flavored gelato topped with biscotti crumbs. It also has some ribbon-like swirls of syrup on top that almost look like caramel, but the actual taste was harder to identify. The swirls have a mild flavor that sort of tasted like the types of spices you might put in certain cookies or biscotti. There are no visible or noticeable pistachio pieces in this; it’s just smooth pistachio-flavored gelato with some cookie bits on top. I’ve seen some people complain that the pistachio flavor tastes artificial in this gelato, but my family thought it was okay. 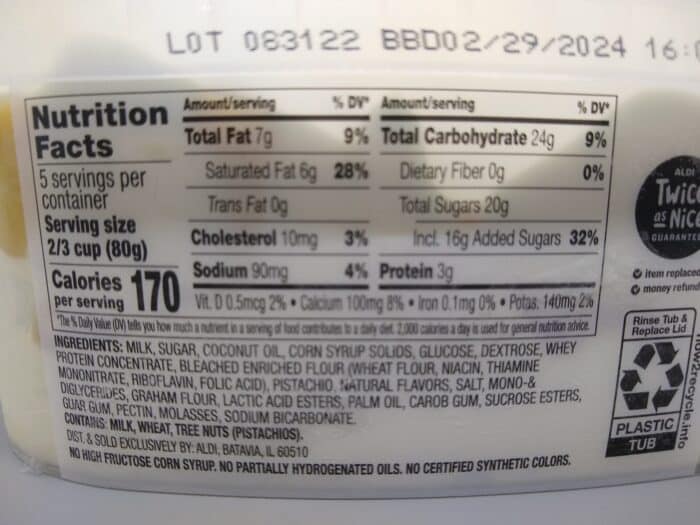 If allergens are a concern, this flavor contains milk, wheat, and tree nuts (pistachios). 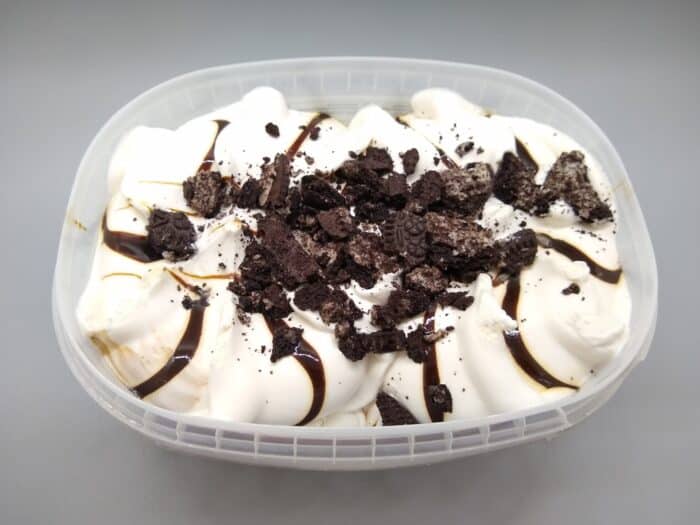 This Caramel Cookie Crunch gelato features creamy vanilla-flavored gelato with swirls of caramel, and it’s topped with chocolate cookies similar to Oreos. This was probably my favorite flavor of all the gelato flavors Aldi regularly stocks. The vanilla gelato is spot on, the caramel swirls add a nice touch of sweetness, and the chocolate cookie pieces add some texture and flavor. 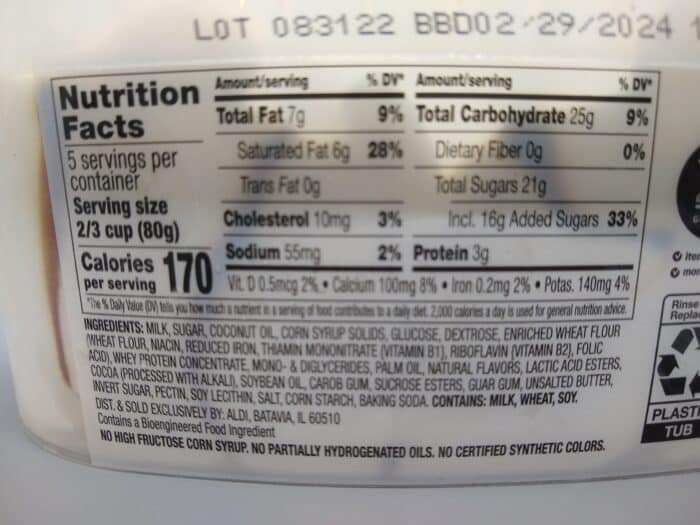 If allergens are a concern, this flavor contains milk, wheat, and soy.

Sundae Shoppe Gelato comes in three flavors: Triple Chocolate, Pistachio Biscotti, and Caramel Cookie Crunch. They’re all good, and my family may now prefer gelato over traditional ice cream. The Caramel Cookie Crunch might be my favorite, but you can’t go wrong with any of these flavors. If you’re a fan of Italian-inspired desserts, drop one (or all three) of these gelato cartons in your shopping cart during your next Aldi trip.