Guacamole is one of my favorite dips. When I was younger, my mom used to make it using fresh avocados and those little envelopes of guacamole seasoning from the grocery store, and she’d serve it with Fritos for dipping.

These days, when I serve guacamole it’s often entirely homemade and I don’t use a recipe with specific measurements. I make it using fresh avocados, fresh minced garlic and onions, some salt, a generous sprinkling of cumin, and a squirt of fresh-squeezed lime juice. I serve my homemade guacamole with tortilla chips as part of taco or nacho nights in my house.

But sometimes when I’m busy, or when I don’t have time to let rock-hard avocados ripen on my countertop, I buy ready-made guacamole dip from the grocery store. Aldi sells some pretty good guacamole. Trader Joe’s, which is a cousin to Aldi, also sells several types of guacamole to choose from.

I tried some TJ’s guacamole recently when I wanted a dip to go with some Trader Joe’s Organic Elote Corn Chip Dippers with Mexican-Style Street Corn Flavored Seasoning. I went with a chunky dip that — interestingly — contains Greek yogurt. 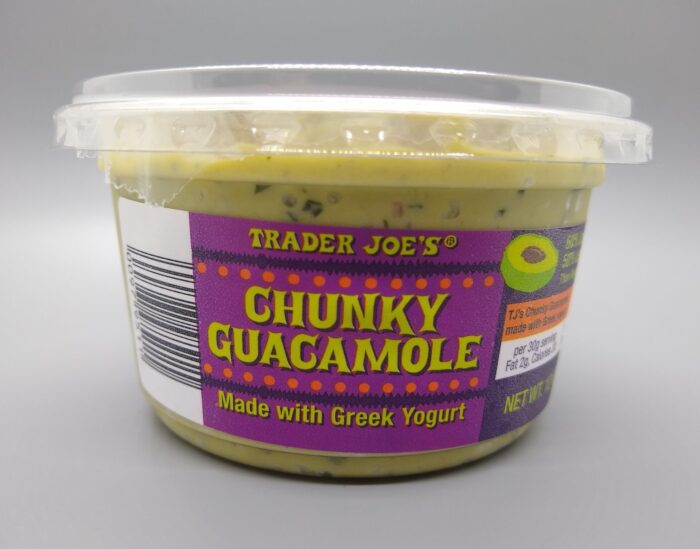 Trader Joe’s Chunky Guacamole cost $3.99 at the time of publication. This appears to be a product that Trader Joe’s stocks regularly all year. It’s found in the deli section, and it should be kept refrigerated. The guacamole I bought on May 13th had a best-by date of June 9th, so it’s good for a decent amount of time. 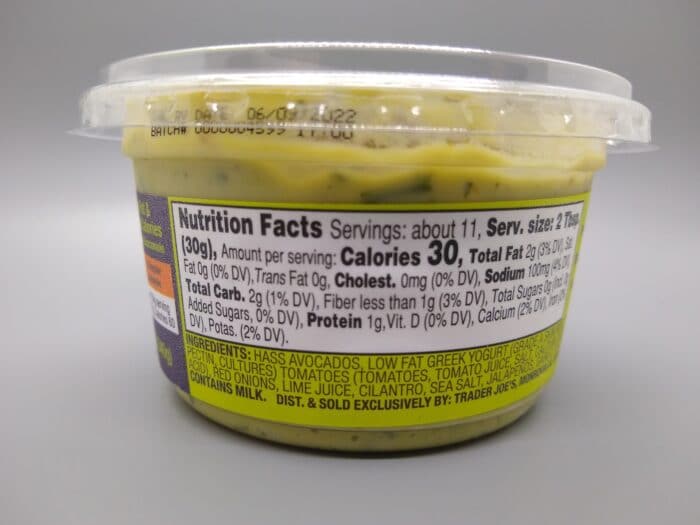 Nutrition information and ingredients, part one. (Click to enlarge.) 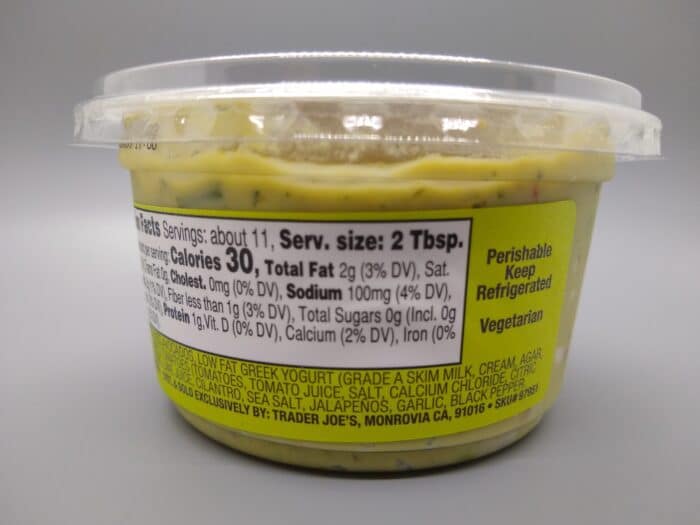 What that means is that this guacamole doesn’t have the consistency of regular guacamole my family is accustomed to eating. The yogurt gives it a smoother, creamier texture, so I’d consider this more of a guacamole-style dip rather than a true guacamole. It tastes good, with just the right amount of zest from the onions, cilantro, jalapenos, and garlic. It’s not overly chunky and was easy to scoop up with corn dipper chips. While it’s a little different from our usual guacamole, I’d buy this again.

Trader Joe’s Chunky Guacamole features all the classic components of guacamole, including avocados, garlic, cilantro, onions, and jalapenos. It also has one less common ingredient: Greek yogurt. The addition of Greek yogurt appears to be an attempt to reduce the calories and fat, and it gives this dip an interesting creamy consistency. It’s not traditional guacamole, but it’s good nonetheless.