In 1984, General Mills introduced Cinnamon Toast Crunch. That much I know. What I’m not sure is exactly how or why, and the General Mills site devoted to the cereal doesn’t offer any help. Several sites, including Wikipedia, claim that it was invented by General Mills employees after getting the idea from a kid in a “give us your best idea for a cereal” radio contest the company held.

I reached out to General Mills to see if this story was true, but I have not heard back as of press time. For now, I can only chalk it up to lore.

Regardless, Cinnamon Toast Crunch consistently ranks among the top 5 cereals in the United States. It’s no wonder, then, that grocers have tried to imitate that success. Aldi, for example, makes a pretty good imitation. Aldi’s distant cousin, Trader Joe’s, also has its spin on the bestseller. 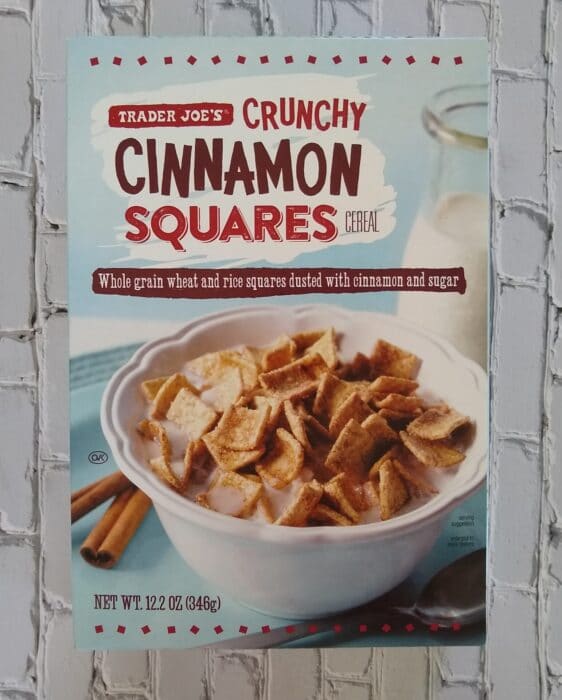 Trader Joe’s Crunchy Cinnamon Squares can be found in the store’s cereal section. At the time of this post, the 12.2-ounce box costs $2.99. That comes out to around 25 cents an ounce. Despite its upscale reputation, Trader Joe’s isn’t always the most expensive store … but in this case, this product is. Brand-name Cinnamon Toast Crunch currently costs about 19 cents an ounce, and the Aldi version is a lot less than that. Strictly on price, the TJ’s version is an inferior deal.

The Trader Joe’s cereal also doesn’t taste like the name brand. It has a lighter, less crunchy texture, and it has less cinnamon and sugar flavor. It’s a decent enough cereal, but if you’re used to the more sugary taste of the General Mills cereal, the difference here will be noticeable. 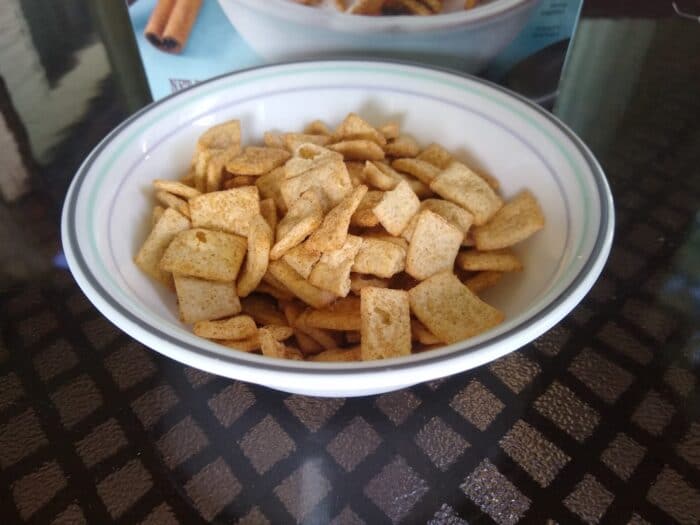 TJ’s has some some advantages on nutrition. Trader Joe’s Crunchy Cinnamon Squares have 10 fewer calories per 1-cup serving than the name brand, as well as 1 gram fewer carbs and 2 grams fewer added sugars. The TJ’s version also offers a bit more dietary fiber, has a somewhat simpler ingredients list (no maltodextrin or dextrose), and is stronger on some of the vitamins and minerals. On the other hand, Trader Joe’s cereal has about 70 more milligrams of sodium per serving than Cinnamon Toast Crunch.

On the allergen front, the Trader Joe’s cereal has wheat, compared to soy and wheat for General Mills.

Trader Joe’s Crunchy Cinnamon Squares are a decent cinnamon-sugar cereal, and like many TJ’s products, it accomplishes this with a somewhat simpler ingredients list compared to its brand name counterpart. However, the nutritional advantages over Cinnamon Toast Crunch aren’t huge, and if you’re used to the brand you’ll likely notice the less crunchy texture and less sweet taste. Moreover, this Trader Joe’s cereal is significantly more expensive than either the brand name or other generics. It is worth trying if you’re a TJ’s regular, but given the difference in both cost and taste, I’m not sure this would be a long-term buy for us.