We usually get olives from Aldi or our local regional supermarket, but during a recent trip to Aldi’s distant cousin, Trader Joe’s, we stumbled upon some different olives and we decided to try them out. 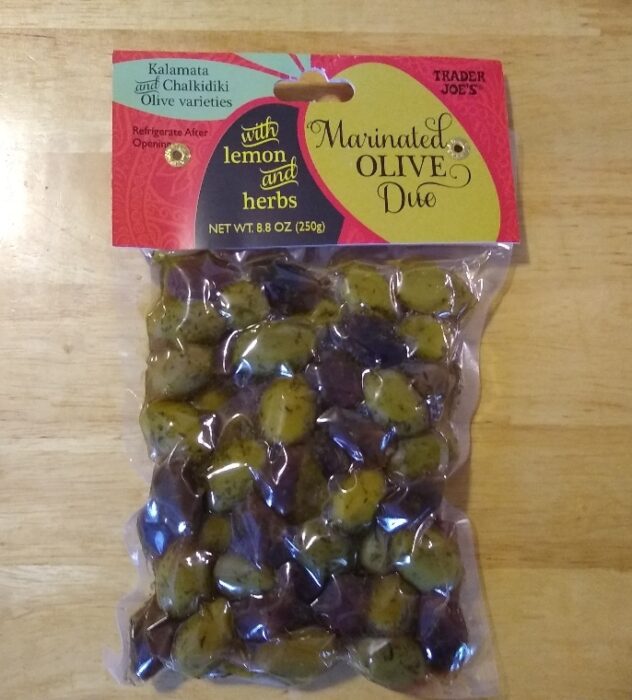 Trader Joe’s Marinated Olive Duo costs $1.79 for an 8.8-ounce package. That comes out to about 20 cents an ounce — that’s the same amount per ounce as the canned Aldi olives. They come in a vacuum-sealed shrink-wrapped package at room temperature, but you should refrigerate them after opening.

If you’re used to traditional canned olives, there are a couple of major differences to these.

One, these have pits, something the package only notes in tiny print on the back. Olive pits, also known as olive stones, are a hard part in the middle of an olive that protects the seed. Olive pits are hard enough that you can crack a tooth if you bite too strongly into them, something a person used to “pitted olives” — olives where the pits have been removed — may not realize. There is an art to eating unpitted olives, although if you’re at home you can probably get away with being less elegant than if you’re in a restaurant.

Two, the lemon and herb seasoning on the olives gives them a somewhat different flavor than canned olives. The core olive taste for the black and green olives is there, but the marinade definitely is there, too. They’re salty and a little bitter, but they also have a richer taste and a slightly firmer texture than canned olives.

Our olive fans were split on these. My one child who likes olives hated these, both in taste and with the challenge of dealing with the pits. I found them a little off-putting at first, but they grew on me as I ate them and as I figured out how to navigate the pits. I’m not an upper-crust expert on olives or anything, but as an average guy I thought these were okay. I’m not sure I’d serve them in my middle-class circles, at least not without fair warning, but they do feel more upscale than my traditional olives. 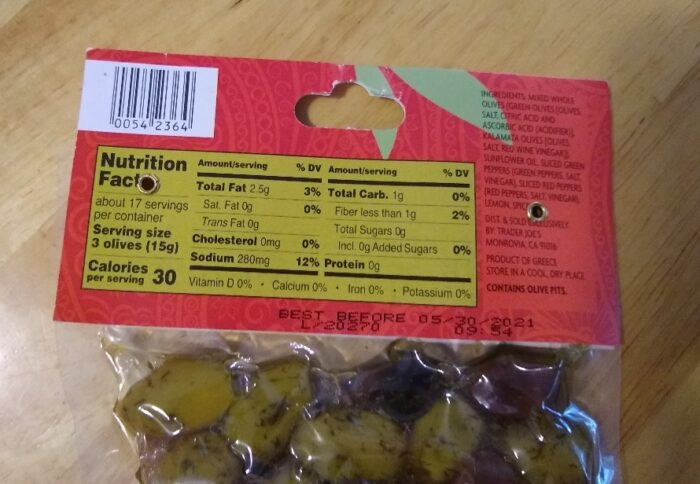 If you’re in the mood for a more upscale kind of olive, these TJ’s olives are more upscale. They have olive stones in the middle and have a marinade that gives them a more complex texture and flavor than canned olives. They’re also surprisingly inexpensive, which makes them a lower risk if you’re feeling adventurous. Just don’t bite down too hard.