EDITOR’S NOTE: Following our review of these olives, we received an email directly from the supplier of the olives. That email, as well as updated impressions, have been added to the end of this review.

Olives are one of those things you either like or you don’t. My wife is not a fan, but I like them. (Interestingly enough, my daughter likes them, too.) I like them on a supreme pizza or in the right kind of salad, but I also like them as a simple hors d’oeuvre alongside things like cheese and crackers.

Aldi sells black olives in a can. This is not a surprise. Aldi also appears to have tweaked its olives recently, though, because there are now two subtly different olive cans on shelves. This isn’t a surprise either, as we’ve seen Aldi tweak other products, sometimes without even changing the packaging. Sometimes those tweaks are for the better, while other times they are not.

With the olives, there is definitely a clear winner and a clear loser.

First off, it’s worth noting that Tuscan Garden Large Olives are a Regular Buy, which means they’re in stores all the time. At the time of this post, they run $1.19 for a 6-ounce can, or about 20 cents an ounce. That’s about half the cost of the olives sold at our local large inventory grocery store.

Right now, Aldi is selling two slightly different cans of olives in our stores. One of them has a silver lid while the other is a copper color. We believe the copper one is the more recent of the two. 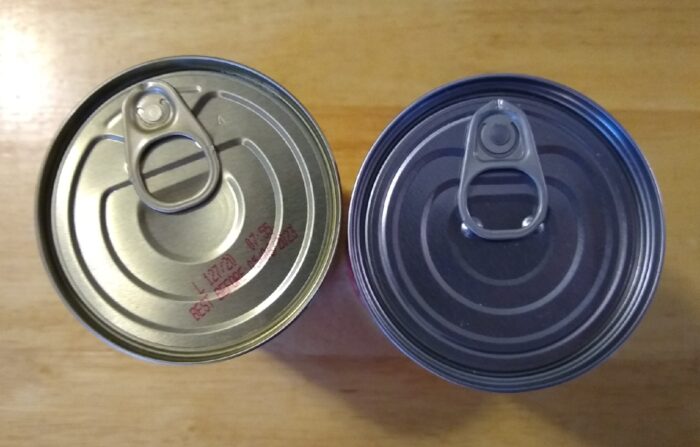 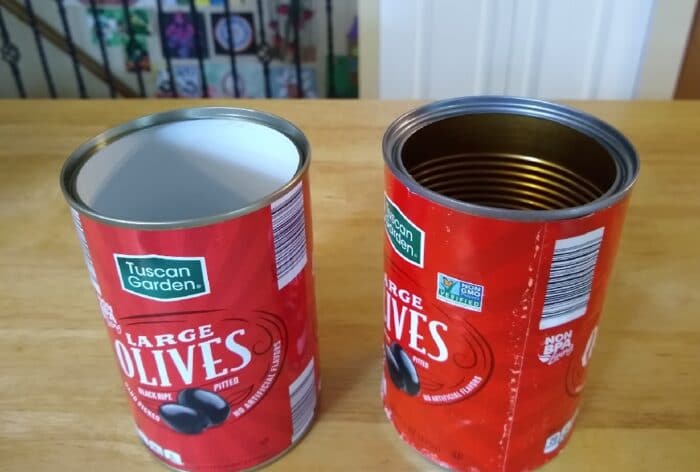 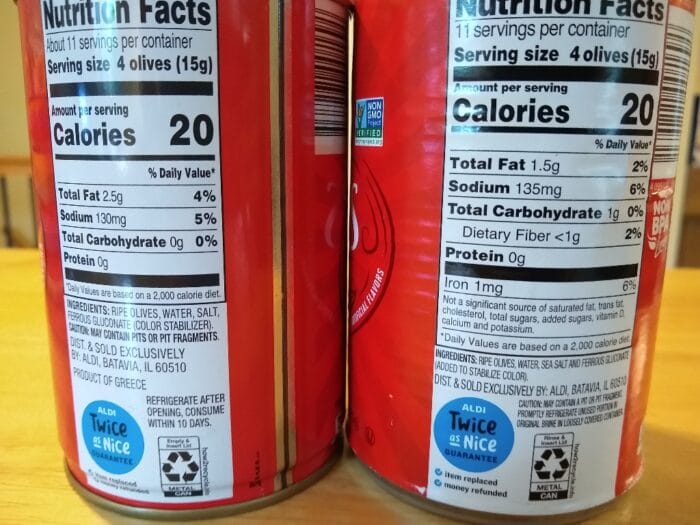 This is all fine and good, but what about taste? Do they taste any different?

The silver lid olives have a thin skin that breaks easier in the mouth. They also have a lot of flavor, punctuated by a generous saltiness.

While the two different versions of Tuscan Garden olives look mostly the same on the outside, they have different tastes and textures. We prefer the older silver lid olives to the newer copper lid ones ourselves. The copper lid ones are palatable, but we think they’re inferior. In our view, if you have a choice, look for the silver lid, at least while you can.

UPDATE (October 2020): Following our publication of this review, we received this email.

I am writing you about your review of the Tuscan Garden Ripe olive products at ALDI on your ALDI reviewer website, written in August 2020. I sent another message through your other site as well, so I apologize if this is being received twice.

We are the supplier if the item you did not enjoy.

Specifically, I’m reaching out because I believe you may have gotten one of the first loads that arrived to ALDI of this new item from Greek olives, which were a bit lower in salt. Since this point, the item has been adjusted accordingly and I believe it will better align with your taste preferences and hopefully perform well in a side by side sampling. If you would please give the item another opportunity to re-review, we would greatly appreciate (we can send you a new jar or you can find in stores for all expiry dates AFTER 05/10/2023). I doubt they’ll be such a clear winner this time around.

We decided to take up the challenge. (On our own dime, I should add.) We found a can with an expiration date after June of 2023.

We’re pleased to report that these olives are improved. They taste a little saltier, have a better texture, and are just better overall. It’s hard to accurately compare them to the silver can olives without tasting them again side-by-side, but we can at least report that the copper lid olives appear to have been tweaked to be better than they were before.