On any given week when I walk into Aldi, it’s pretty much a guarantee there will be at least a few specialty pizzas in the Aldi Find freezer aisle. I’ve gotten some good ones over the years, including cauliflower pizza, broccoli and cheddar crust pizza, deep dish pizza, some amazing pan pizzas, and an impressive breakfast pizza.

Most recently, I found some artisan crust pizzas at Aldi and decided to try them. 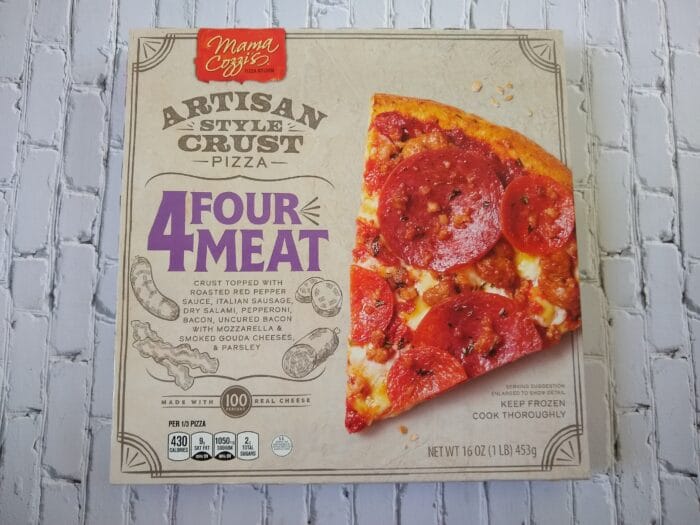 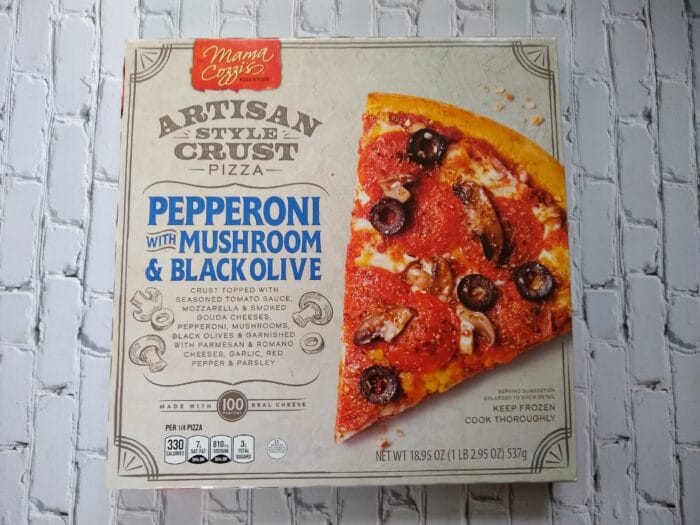 Mama Cozzi’s Artisan Style Crust Pizza cost $4.99 at the time of publication. The pizza was available in two varieties: a 16-ounce Four Meat or an 18.95-ounce Pepperoni with Mushroom & Black Olive.

My family liked the Four Meat pizza enough that I went back a few days later and bought the other variety with pepperoni, mushrooms, and black olives to try as well. That one consists of “crust topped with seasoned tomato sauce, mozzarella & smoked gouda cheeses, pepperoni, mushrooms, black olives & garnished with Parmesan & Romano cheeses, garlic, red pepper & parsley.”

These pizzas are Aldi Finds, which means they’re only in stores for a short time. Aldi does not offer online ordering on its specials, so once these sell out at your local store, they’re gone.

To bake either pizza, preheat the oven to 400 degrees Fahrenheit. Remove the pizza from its packaging and place the pizza directly on the middle rack (I used a special pizza pan with holes). Bake for 16-19 minutes until the cheese is melted and edges are golden brown. Both pizzas were done after about 14-16 minutes in my oven. 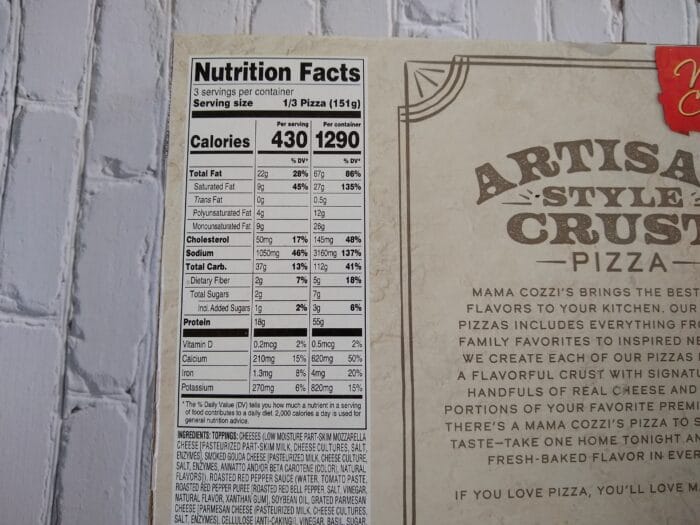 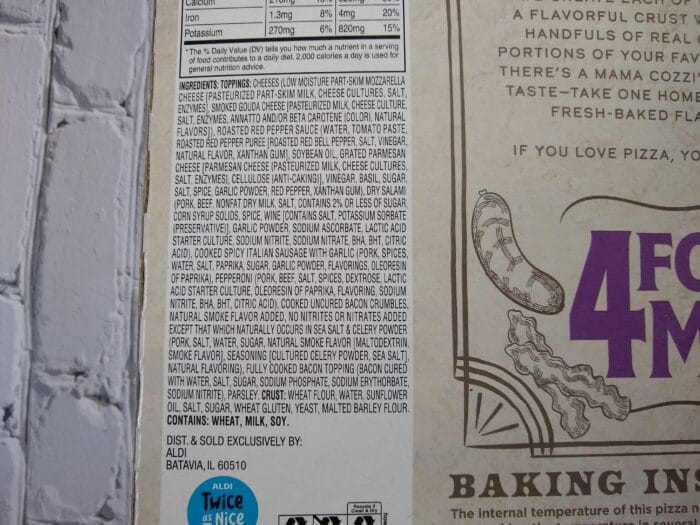 If you’re looking out for allergens, the Four Meat pizza has wheat, milk, and soy. 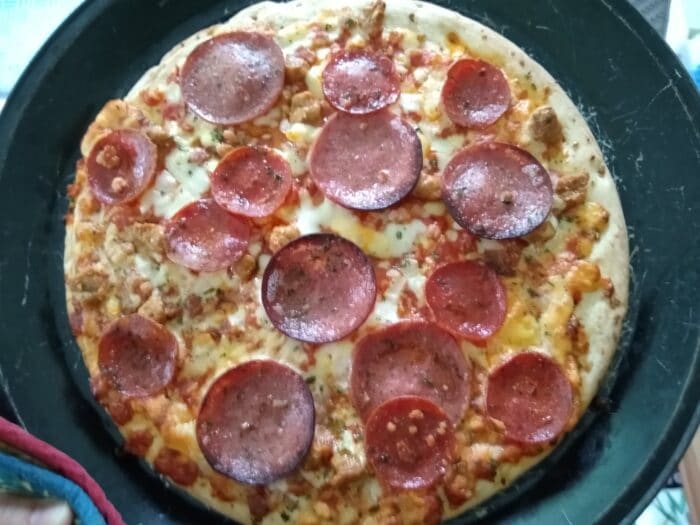 This pizza crust was crisp, the toppings were generous, and the roasted red pepper sauce was savory-sweet and delicious. I wasn’t sure if I would like the pepper-based sauce, but the pepper flavor was mild. Everyone in my house who tried this pizza liked it, and some family members asked me to pick it up again if it’s still in stock during my next Aldi run. 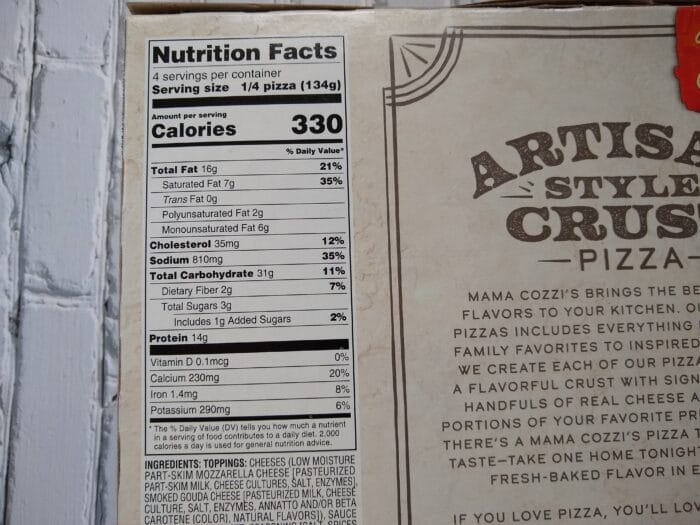 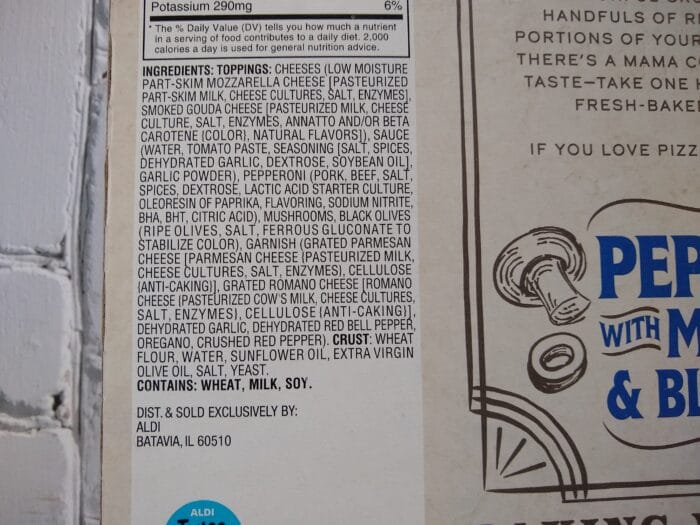 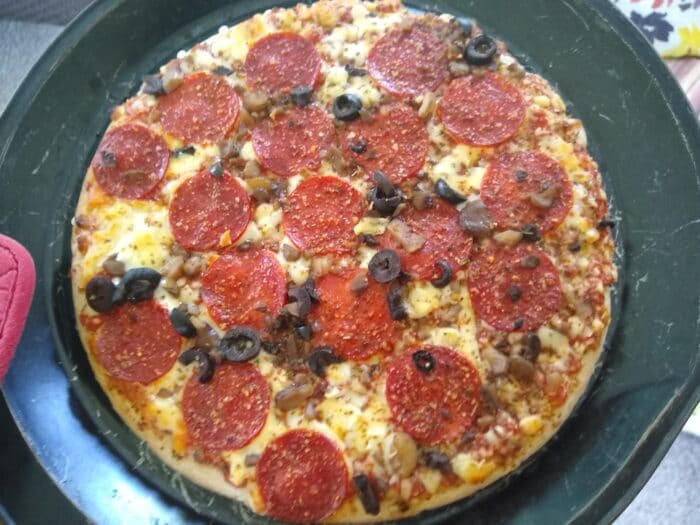 Once again, the crust baked up nice and crisp with this pizza. The sauce tastes more like traditional pizza sauce with no roasted red peppers. The mushroom pieces are all on the small side, and my family thought this pizza was light on the olives. Otherwise it’s a good pizza, with noticeable seasonings sprinkled atop all the other toppings and good flavor.

Mama Cozzi’s Artisan Style Crust Pizza comes in Four Meat or Pepperoni with Mushroom & Black Olive varieties. We tried both types and everyone gave them two thumbs up. These pizzas have crisp crusts and flavorful sauce and toppings. Our only minor complaint is that if you like olives, the pizza variety with olives doesn’t have quite as many as you might want. Despite that, these are good pizzas.