I’m a fan of mushrooms. I especially like them sauteed in butter, then placed on top of a burger, but I also will take uncooked ones as a salad topping. I’m also not opposed to eating sauteed mushrooms just own their own.

Most often, when we want mushrooms, we’ll get the fresh kind, taking care of the rest ourselves. However, we also noticed that Trader Joe’s, which is Aldi’s distant cousin, sells a mushroom medley in its frozen section, so we decided to try it out. 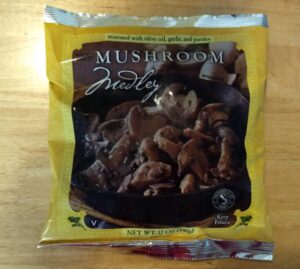 Trader Joe’s Mushroom Medley comes in a 12-ounce bag. At the time of this post, it cost $3.79. The packaging notes it’s a product of Italy, and it contains the following mushrooms:

In addition, they are served in extra virgin olive oil and sunflower seed oil, along with parsley, salt, and garlic. Like some other Trader Joe’s products, these are pretty “whole foods,” with no strange additives or preservatives. 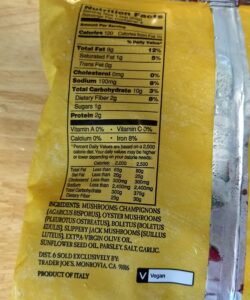 The bag instructs users to keep it frozen, and it notes that the mushrooms can be cooked from frozen. There are two cooking methods: stove top and microwave.

To cook on the stove top, pour the desired amount into a skillet and saute over medium heat for three minutes, then increase the heat to high, saute for one additional minute, and serve.

To cook in the microwave, pour the desired amount into a microwave-safe dish, then heat for 3 minutes, stir well, and then continue heating for 2 minutes and serve.

We thought the mushrooms were okay. I can’t say they were the best mushrooms I’ve ever had: the taste was so-so and the texture was a little more slimy than we’re accustomed to. I suspect part of this was due to the fact that they were frozen. I served them on a steak, and while they were adequate, I would say they’re not a substitute for fresh mushrooms.

Trader Joe’s Mushroom Medley is, in our view, a pretty so-so mushroom experience. Despite a nice ingredients list that doesn’t have any additives or preservatives, the mushrooms don’t come out all that great in terms of texture or taste, probably because they’re frozen. If you need a mushroom medley that you can keep in the freezer for a while, this will work, but I don’t think it’s as good as fresh mushrooms.