I’ve learned the hard way that there aren’t usually shortcuts on taste. Diet soft drinks don’t taste like regular soft drinks. Keto ice cream doesn’t take like regular ice cream. And anything that is reduced fat often tastes like it.

That’s why, most of the time, I don’t eat reduced fat foods. I’d rather eat in moderation and enjoy what I’m eating than suffer through a snack food or dessert that is mediocre (and then feel tempted to eat still more to compensate). I still hold out hope, though, that manufacturers can create foods that are both a little better for you and also taste good. And I figure that if anyone can do it, Trader Joe’s can. 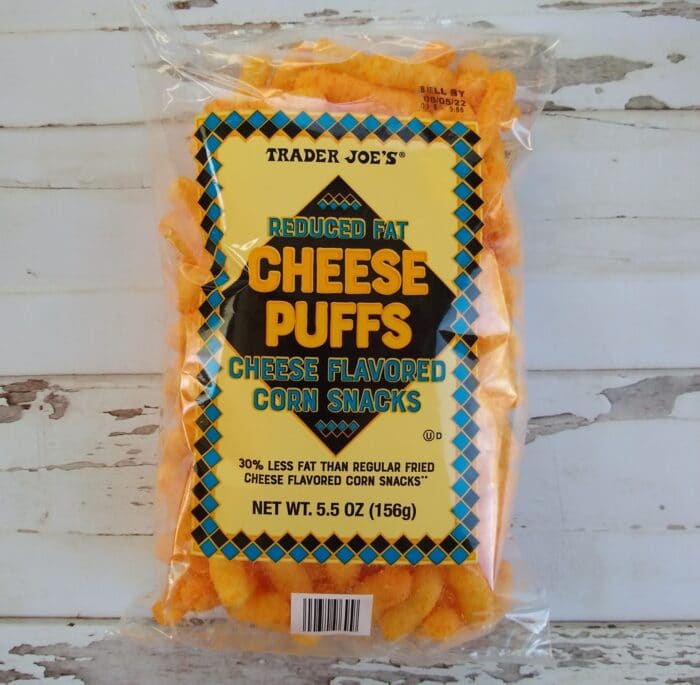 Trader Joe’s Reduced Fat Cheese Puffs can be found regularly among TJ’s snack foods. They come in a 5.5-ounce bag and cost $2.49, or about 45 cents an ounce.

How good the price is depends on how you look at it. Compared to regular cheese puffs, it’s high. While name brand puffs run similar in price to TJ’s, store brand puffs at Aldi and Walmart run around 16-19 cents an ounce. Also, because grocers don’t seem to carry as many reduced fat cheese puffs options, it’s not as easy of an apples-to-apples comparison. 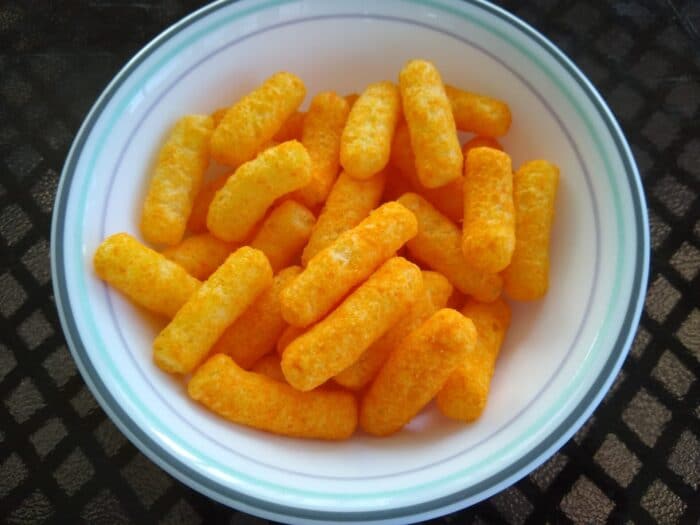 We thought these puffs were okay. As expected, we didn’t like them as much as regular cheese puffs: the texture was fine, but they’re lighter on cheese flavor than what we’re used to. They taste more like corn snacks dusted with some cheese rather than the cheese-laden puffs that turn your fingers bright orange that we would get for a cookout or other gathering.

Of course, the tradeoff is that they’re better for you. Not only are they lower in fat than a typical puff, but the ingredients list isn’t too long and is mostly understandable. That’s a plus, especially when foods like this often contain so many odd components. These aren’t entirely guilt-free, though: they still have some fat, and there are plenty of carbs and sodium like other cheese puffs. 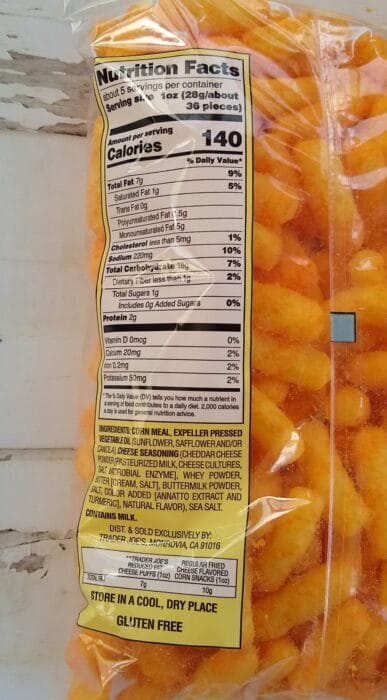 Nutrition and ingredients. Note that milk is a potential allergen. (Click to enlarge.)

Trader Joe’s Reduced Fat Cheese Puffs are a mixed bag. (No pun intended.) On the positive side, they’re lower in fat than normal cheese puffs, taste decent, and are made with fewer ingredients than many other cheese puffs. But they’re also not quite as good as regular cheese puffs, and they’re on the pricey side to boot. That said, if you want your snack fix at a lower fat count, these might be worth a look.