A favorite lunch meal in our household is grilled cheese sandwiches and tomato soup. We make the combination at all times of the year, but we’re particularly partial to it during the colder months.

While we can and do make homemade tomato soup for dinner from time to time, when it comes to a quick lunch we usually default to a canned tomato soup. Our default option always has been Campbell’s Tomato Soup, as it is a tried-and-true brand with us. On the other hand, we’ve also tried out our share of Aldi soups, including those in the chunky and homestyle lines.

We decided, then, to try out Aldi tomato soup, and we put it head-to-head against Campbell’s. 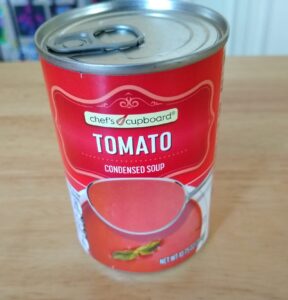 Chef’s Cupboard Tomato Condensed Soup is a Regular Buy, meaning you can find it in stores all the time. It comes in a single 10.75-ounce can. (We’re guessing this is an instance of product shrinking, and it isn’t just Aldi — our Campbell’s soup can is also 10.75 ounces.) The Aldi tomato soup costs 49 cents a can, which is a lot less than the $1.79 or so that we regularly pay for Campbell’s soup when it’s not on sale (we rarely find it on sale for as low as $1 a can). Aldi doesn’t sell the large cans of soup the way Campbell’s does, but we wouldn’t be surprised if the Aldi soup was a better deal even against those.

If you’ve made condensed soup out of a can before, you know the drill. The instructions allow for either stove top or microwave preparation, and the directions are identical to the Campbell’s soup cans we use.

For stove top, you put the can of condensed soup plus one can of either water or milk in a saucepan, then heat until simmering, stirring while it heats.

For the microwave, you pour the can of condensed soup plus one can of either water or milk in a microwave-safe container, then cover and heat for 2 1/2 to 3 minutes. Then you leave it in the microwave for 1 minute, stir, and serve.

Of note: we prefer using milk in our soup, and whole milk at that.

We went with the stove top method. We went to peel the pop top off the Aldi soup … and the tab came off without the lid. 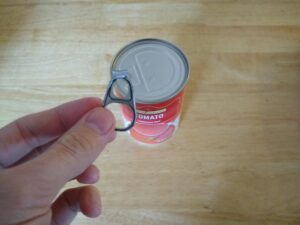 We had no such problem with the Campbell’s soup. Note the differences in the tabs in a picture taken before we tried to pop them open: the Aldi tab is smaller, which may account for the problem. 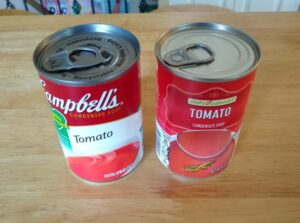 After using a can opener to get the Chef’s Cupboard lid off, we placed the mix in a saucepan, simmering it side-by-side with Campbell’s Tomato Condensed Soup. We noticed that the Campbell’s soup paste seemed a little lighter and thicker, and it seemed to mix more readily with the milk. It took us longer to get the milk and Aldi soup to come together. 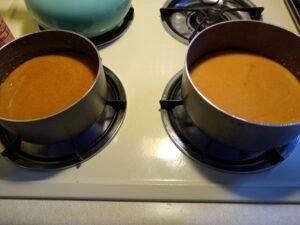 Chef’s Cupboard at left, Campbell’s at right. (Click to enlarge.)

We then served the soup to our tomato-loving family of four.

The results were unanimous: both adults and kids alike preferred the Campbell’s over the Chef’s Cupboard. One tester, a kid, disliked the Aldi soup so much she quit after the first bite. The other three testers thought the Aldi soup was fine on its own merits, but everyone agreed the Campbell’s was superior. The Campbell’s was described as creamier, richer, smoother, with a slightly sweet taste, while the Chef’s Cupboard was described as more tomato-like, less sweet, thinner, and less creamy. 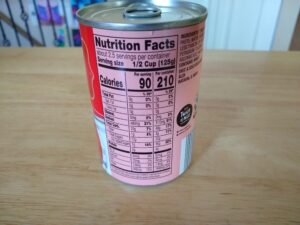 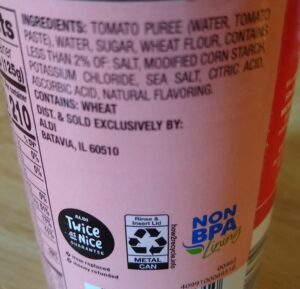 Chef’s Cupboard Tomato Soup is a very inexpensive option for canned soup, and three of our four testers said they liked it. All four of us agreed, though, that Campbell’s Tomato Soup, while more expensive, is a superior soup. If you need cheap, Aldi is the place to go. But in this instance, if quality is your top priority, then we think name brand is the way to go.