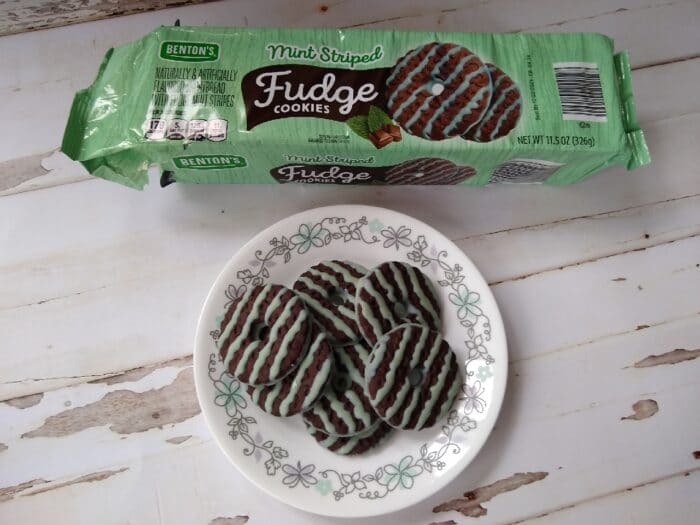 Just before St. Patrick’s Day this year, Aldi advertised some limited-edition mint striped fudge cookies in a green package. They showed up in the weekly ad among other St. Paddy’s Day products like green-iced cupcakes and cookies and Irish cream cheesecake.

I didn’t plan to buy any of the green-tinted sweet goodies. I’ve been trying to limit my consumption of sugary foods after indulging during the Christmas season, so I passed them by during my shopping trips during late February and through mid-March.

But then several readers began telling us how excited they are about the mint striped fudge cookies at Aldi because they are so similar to the imitation Girl Scout Thin Mint cookies Aldi used to sell. For reference, Aldi sells several types of Girl Scout cookie knockoffs all year, including ones that are dead ringers for Tagalongs and Samoas. Aldi also used to sell knockoff Thin Mints called Benton’s Fudge Mint Cookies, but sometime in 2019 they stopped carrying them, much to fans’ disappointment. (You can also get your generic Thin Mint fix at Dollar Tree.)

It’s important to note that Aldi did not actually bring the knockoff Thin Mints back, because these new mint striped fudge cookies have some key differences, including:

Also important: while the old Benton’s Fudge Mint Cookies used to be available all year, the new mint striped fudge cookies are only around for a short time. They are marketed as an Aldi Find (Special Buy), which means stores usually only get one shipment, and once they sell out, that’s it, and you can’t order them online after they’re gone from your local stores.

I finally caved and added the new cookies to my shopping list to see what all the hype was about. I wasn’t sure there would be any left at my store because they’d already been out on shelves for several weeks, but my store still had plenty.

I was surprised at how much the striped cookies actually do resemble Thin Mints in terms of taste and texture, if not appearance. Based on how they look, I assumed they would be more like Keebler Fudge Stripes, with a softer buttery shortbread cookie coated with fudge, but that is not the case. If I were blindfolded and couldn’t see the green stripes, there’s a good chance I’d think these were Thin Mints.

Benton’s Mint Striped Fudge Cookies cost $1.49 for an 11.5-ounce package at the time of publication. The package describes these cookies as “naturally and artificially flavored shortbread with fudge mint stripes.”

If you’re watching out for allergens, these contain soy and wheat. They may contain milk, peanuts, and coconut. 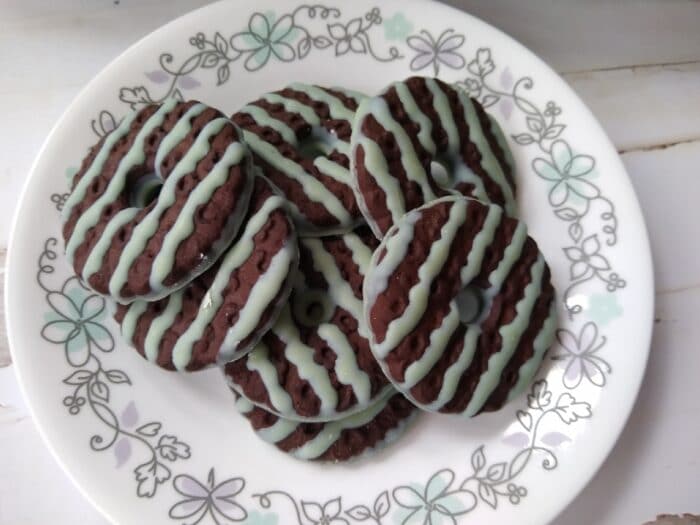 They are very crisp and chocolatey. The cookie base is very close to what Thin Mints or the old Benton’s Fudge Mint Cookies used to be, while the fudge stripes are smooth and melt in your mouth.

These were an instant hit in my household, so it’s a good thing I bought two packages. Just remember, we don’t expect these to stick around at Aldi, so if you like them, don’t put off buying them if you see them.

Benton’s Mint Striped Fudge Cookies look like Keebler Fudge Stripes cookies but taste a lot like Girl Scout Thin Mint cookies, much to the delight of fans who were disappointed when Aldi discontinued its copycat Thin Mints a couple of years ago. They’re not exactly the same as the old Thin Mint knockoffs, but they’re closer than we expected. These new cookies are Aldi Finds, though, which means Aldi won’t sell them all year, so stock up.