When the holiday season comes around, Aldi stocks plenty of German-made baked goods that include cookies and gingerbread. Many of these treats are under the Aldi Winternacht private label (Winternacht means “winter night” in German), which encompasses Christmas cookies, chocolate, and other treats that show up only around Christmas time. The Winternacht spekulatius spiced cookies are among our favorites, as they’re perfect paired with a cup of hot cocoa, tea, or coffee. I also like Aldi Winternacht Panettone. Most recently, I decided to try another baked good that has a bit of a cult following among Aldi shoppers: stollen imported from Germany.

Stollen has been around for hundreds of years. It originally was a bland bread because butter was not allowed to be used during the time of Advent, which was similar to Lent in that people were required to abstain from indulging in rich foods.

Stollen today is a yeast-based cake-like bread studded with nuts and dried or candied fruit, along with spices. Consider it a cousin to the English fruitcake or the Italian panettone, to name a few similar breads from other parts of the world. After baking, stollen is coated in butter and rolled in powdered sugar. Tradition has it that this is supposed to be reminiscent of the infant Christ being wrapped in swaddling cloths, or the sugar may also remind one of a snowy German scene. Sometimes there’s marzipan in the center of stollen, and sometimes not. Ironically, the longest stollen ever baked was done so by Lidl, one of the biggest competitors to Aldi in Europe. 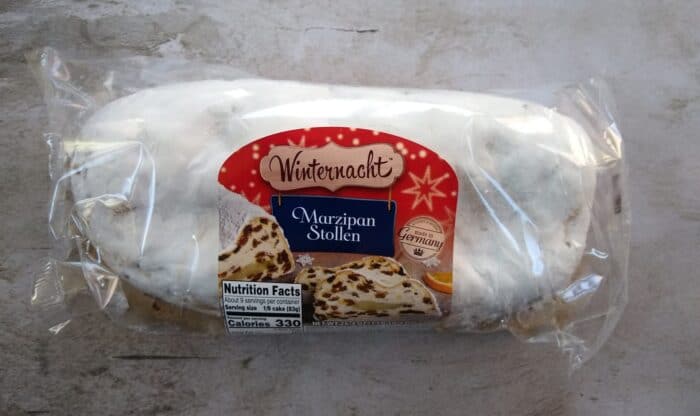 Winternacht Stollen cost $5.49 for a 26.4-ounce package at Aldi at the time of publication. Aldi sells it in several varieties. I bought the marzipan variety based on recommendations from Aldi fans on social media, but there are also butter almond and cherry varieties. As mentioned earlier, this is a product of Germany.

I’m not completely sure, but stollen appears to be a Seasonal Favorite at Aldi, which means it’s in stores for longer than an Aldi Find, but it’s not sold all year. Generally, this shows up in time for the Christmas season.

If you’re looking out for allergens, the marzipan stollen contains wheat and tree nuts (almonds). It may contain other tree nuts, eggs, and milk. 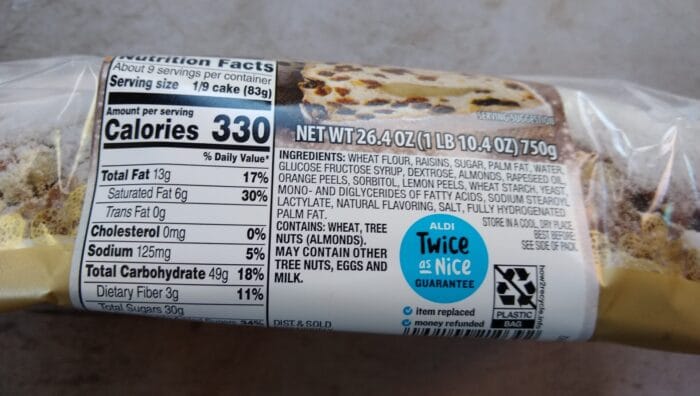 Full disclosure: no one in my household has ever tried traditional stollen like this, or fruitcake, or anything similar. Fruitcake, of course, has a reputation for not being that great, and I’ve read mixed reviews about the Aldi stollen on social media, so I wasn’t sure what my family would think of it. (One of the nice things about shopping at Aldi is that it gives us opportunities to try new foods without breaking the budget.) 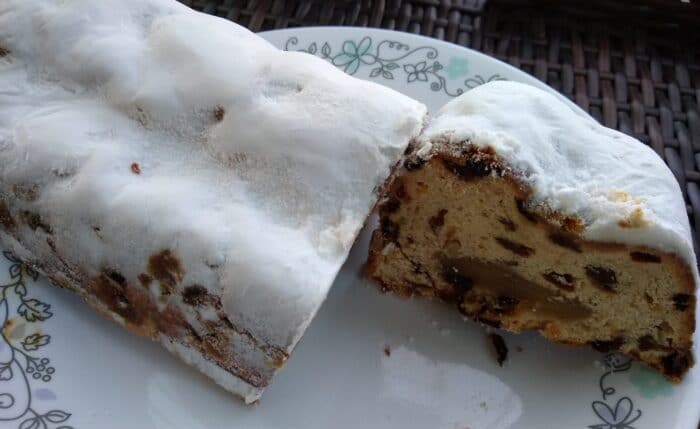 It was surprisingly not bad. Different, but not bad. My kids tried it and declared they liked it, and they went back for second helpings. The bread is extremely dense and heavy, mildly sweet, and dotted with chopped fruit and nuts. The marzipan rope through the middle adds interesting texture and flavor (but remember not all Aldi stollen has marzipan). 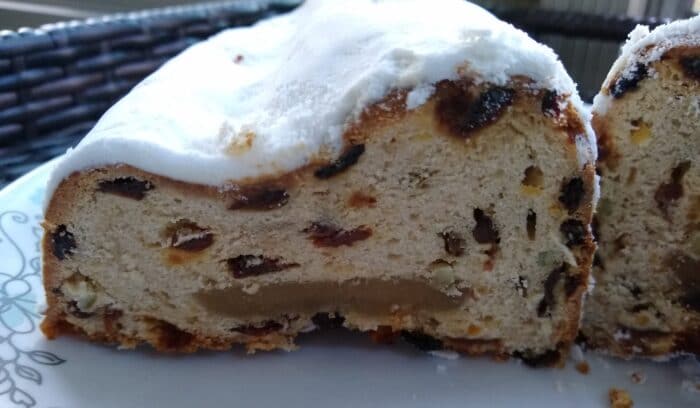 I’m not sure this will become an annual tradition for us, but it was interesting to try, and I was pleasantly surprised that my family liked this bread as much as they did. I’m also curious now to try homemade stollen or to try stollen from a quality bakery, which I’ve read is even better than store-bought stollen.

Winternacht Stollen comes in several varieties, including marzipan, butter almond, and cherry. We tried the marzipan stollen and it was unexpectedly good. This bread is dense, mildly sweet, and studded with bits of diced fruit and nuts. The outer sugar coating is a nice touch as well. If you’re interested in trying a classic German baked good, the Aldi version is worth considering. Best enjoyed with a cup of coffee or other warm beverage.